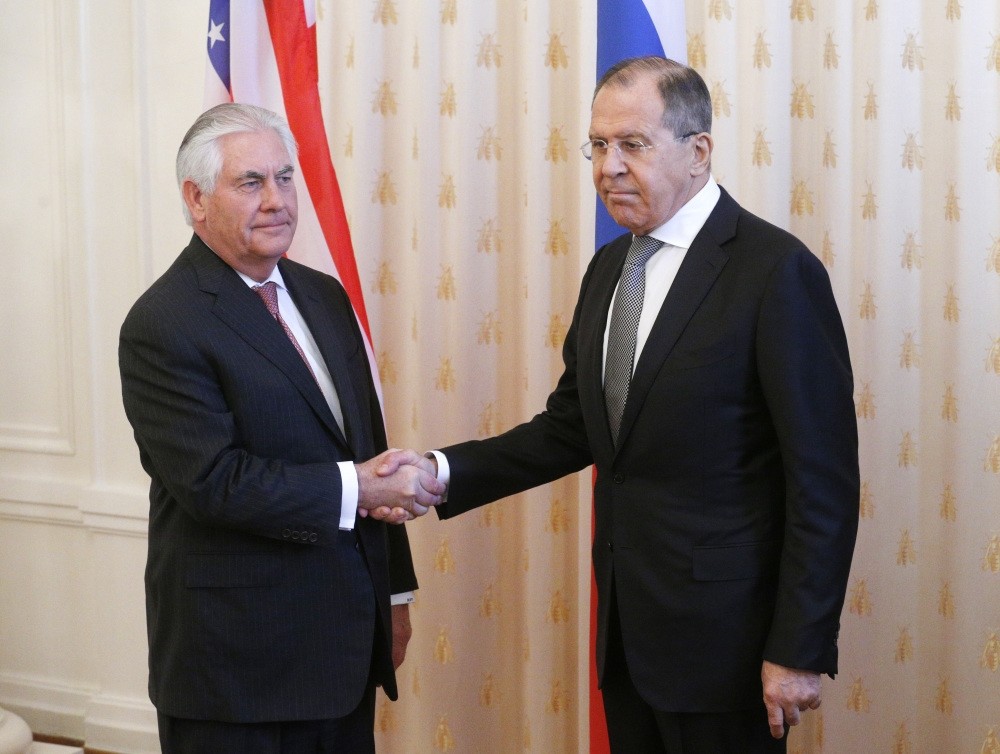 The meeting between U.S. Secretary of State Rex Tillerson and his Russian counterpart Sergei Lavrov was held in strained ambiance, as the two powers discussed no-fly zones in Syria as well as the situations in North Korea and Ukraine

The long-awaited meeting between the U.S. and Russia finally took place in Moscow yesterday where U.S. Secretary of State Rex Tillerson and his Russian counterpart Sergei Lavrov addressed no-fly zones in Syria, according to Russian Deputy Foreign Minister Sergei Ryabkov who spoke yesterday. According to Russia's RIA news agency, Ryabkov stated that matters related to North Korea and Ukraine were also on the agenda. Ahead of the critical meeting, Tillerson said he wanted "a very open, candid and frank exchange" as the two officials aimed to figure each other out during the first visit to Russia by a senior member of the Trump administration.

In the wake of last week's chemical weapons attack in Idlib which left at least 100 men, women and children dead and more than 500 others injured, the World Health Organization (WHO) recently said the attack was the most horrific chemical weapons attack in the war-torn country since a similar attack in eastern Damascus in August 2013. The Trump administration has vowed to take "additional action, as necessary and appropriate" in Syria against the Assad regime. On that note, the U.S. secretary of state arrived in Moscow as part of the first official high-level visit by a U.S. official under the Trump administration to meet with his Russian counterpart. Speaking ahead of the meeting, Tillerson said, "Our meeting today comes at an important moment in our relationship so that we can further clarify areas of common objectives, areas of common interest -- even where our tactical approaches may be different -- and further clarify areas of sharp difference so that we can better understand why these differences exist."

Though Russia strongly opposed the U.S. missile attacks against the Assad regime's chemical weapon base, U.S. Defense Secretary James Mattis told reporters yesterday while speaking at the Pentagon that "the Syrian regime should think long and hard before it again acts so recklessly in violation of international law [which prohibits] the use of chemical weapons," going on to say, "If they use chemical weapons they are going to pay a very, very stiff price," while noting that "We [the U.S.] maintain communications with the Russian military and, with the diplomatic channels, it will not spiral out of control." In that respect, Foreign Minister Lavrov said ahead of the meeting with Tillerson that Moscow was hoping to understand Washington's "real intentions" during the visit while warning that Moscow considered it "fundamentally important" to prevent additional strikes. Additionally, the U.N. Security Council voted yesterday on a draft resolution demanding that the Assad regime cooperate in an investigation of the suspected chemical attack last week in Idlib province, according to U.S. diplomats. The resolution submitted by the U.S., France and the U.K. was slightly revised from a previous text presented last week in response to the sarin gas attack in the town of Khan Sheikhoun.

Meanwhile, Turkey's EU Affairs Minister Ömer Çelik told Anadolu Agency (AA) yesterday that Assad manipulated efforts to resolve the six-year conflict in Syria while carrying out attacks on civilians. "The world needs to use force to stop the massacres," he said, while adding that "We have always talked about the political solution until now but we know how Assad blocked the process towards any political solution. When the political solution is alive, Assad answers by using chemical weapons."
RELATED TOPICS