Trump calls Erdoğan to congratulate him on referendum victory 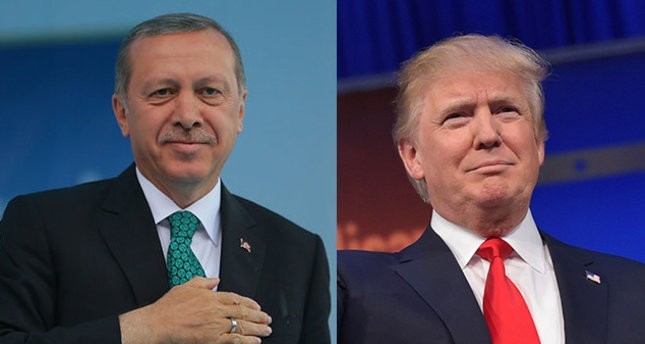 U.S. President Donald Trump on Monday called President Recep Tayyip Erdoğan to congratulate him on the referendum victory, as he highlighted that he values Turkey's friendship and cooperation.

The two leaders had a "pleasant" call that lasted 45 minutes, diplomatic sources said.

In the phone call, Trump also congratulated President Erdoğan on his "strong leadership," according to the same sources.

Sources added that the parties also discussed the Syrian crisis during the call, reiterating their willingness to cooperate in the fight against the Daesh terrorist group.

Washington's policy on Syria has relied heavily on support from the PKK's Syrian offshoot the Democratic Union Party's (PYD) armed wing, the People's Protection Units (YPG), a policy that has vexed Ankara as Turkey designates the PYD/YPG as terrorist groups. The PKK is recognized as a terror organization by the U.S., Turkey and the EU.

The Obama administration supported the PKK-affiliated YPG in Syria under the guise of fighting Daesh, failing to abstain from further solidifying relations with the terrorist group despite Ankara's ultimatums and stern warnings. However, during a visit to the U.S. last week, Defense Minister Fikri Işık said that the U.S. has a clearer position on the PKK compared to the the previous administration. Yet, whether the Trump administration will continue this backing remains to be seen and a major policy shift in Washington in favor of Ankara could be a game changer on the ground.

Meanwhile, presidential sources said that Trump told Erdoğan he values Turkey's friendship and that there is a lot of important work to do in terms of cooperation.

Trump also thanked Erdoğan for Turkey's support against the Assad regime airstrikes in Syria, adding that the U.S. can no longer keep silent about the regime's attacks.

The U.S. president agreed with Erdoğan in condemning the Assad regime's use of conventional weapons on Syrian civilians, emphasizing the use of barrel bombs.

Presidential sources also noted that Trump said he will be in close cooperation with Turkey on Syria, Iraq and the PKK.

The extradition of Fetullah Gülen, the leader of the Gülenist Terror Group (FETÖ), from the U.S. is another issue between Ankara and Washington that has been waiting to be solved.

Turkey expects the Trump administration to take steps in this regard and extradite the FETÖ leader. Gülen has been living in Pennsylvania since 1999 and is accused of trying to topple the democratically elected government of Turkey on July 15 in a coup attempt that was foiled when the public took a stand against the coup plotters coupled with police and military forces loyal to the government. The putsch attempt resulted in 249 deaths and more than 2,000 injuries.

Sunday's referendum resulted in a 51.41 percent victory for the "yes" campaign, heralding the adoption of an 18-article bill that includes provisions for an executive presidency.

The reforms will hand executive powers to the president and abolish the post of prime minister. The president will also be allowed to keep his ties to a political party. President Erdoğan is now expected to rejoin the ruling Justice and Development Party (AK Party).