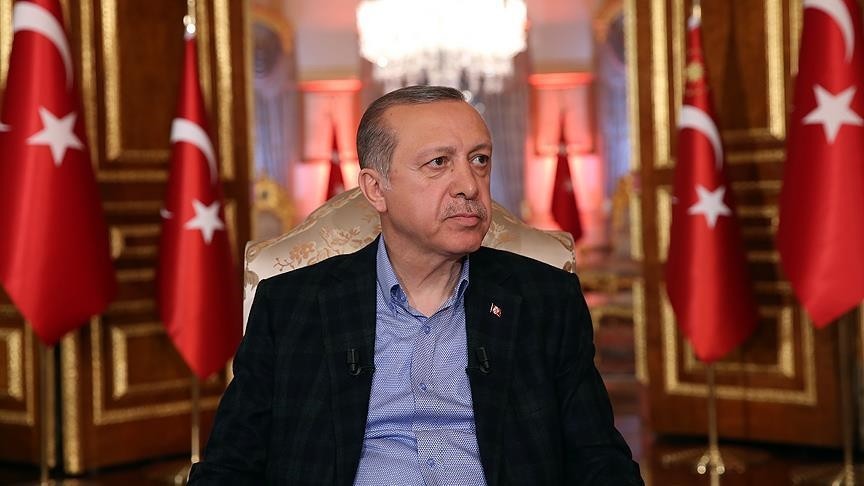 The Barack Obama administration did not keep its promises with Turkey over its cooperation against the PKK terrorist organization, President Recep Tayyip Erdoğan said late Wednesday, calling for stronger ties with U.S. President Donald Trump.

"With President Obama, we had a mutual agreement about the PKK, but Obama deceived us. I don't believe the Trump administration will do the same," President Erdoğan told Al Jazeera in an exclusive interview.

Erdoğan criticized Obama for failing to abide by an agreement between the two countries to fight against terrorist organizations. The Turkish president's latest remarks followed his earlier statements on Wednesday when he said, "The way President Trump is approaching matters is encouraging and it makes us happy."

One of the major disagreements between Ankara and Washington during the Obama administration was the U.S.'s support of the Syria Democratic Forces (SDF), which is predominantly led by the PKK terror organization's Syrian offshoot, the Democratic Union Party (PYD). While the Obama administration has argued that the SDF is the most effective "partner" of the U.S.-led anti-Daesh coalition, Turkey has identified the PYD as a terrorist organization through its organic links to the PKK and has stressed numerous times that one terror group cannot be used to eliminate another.

Turkey, the U.S. and the European Union recognize the PKK as a terrorist organization. The EU and the U.S., however, do not categorize the PYD and its armed wing the People's Protection Units (YPG) as terrorist organizations, though Turkey strongly opposes any PKK-affiliated group located south of its border, both in Iraq and Syria, saying they constitute a national security threat.

The diplomatic talks and negotiations continue between Ankara and the Trump administration over the U.S. support of the YPG, particularly when it comes to making the YPG the biggest force on the ground in the offensive in Raqqa. Turkey has voiced concerns over the YPG's aims of demographic changes in areas cleared from the Daesh terror group in Syria, arguing that the local forces should be supported instead.

Another argument that Ankara has brought to Washington's attention concerns the YPG's ultimate goal of connecting its cantons to the east and west of the Euphrates to form an autonomous terrorist state along Turkey's southern border, a move which Ankara has said it would not allow.

Last month, Turkey officially announced that Operation Euphrates Shield, which had been ongoing in Syria since last August, had ended, while Turkish officials hinted that there might be more cross-border campaigns in the future. Turkey, backing the Free Syrian Army (FSA), liberated a nearly 2,000-square-kilometer (772-square-mile) area from Daesh, including the Syrian towns of Jarablus, al-Rai, Dabiq and al-Bab.

Meanwhile, Erdoğan also said he was planning to meet with his U.S. counterpart next month, ahead of a NATO meeting.

President Trump, who came to power in January following an eight-year Obama tenure, called Erdoğan on Monday to congratulate him on Sunday's historic referendum, in which Turkish voters approved changes to the country's Constitution designed to usher in an executive presidency.

"The most important point we discussed was about the developments in Syria and Iraq. We plan to meet in May, and we will discuss things further face-to-face," Erdoğan said about the phone call.

During the interview, Erdoğan also said that if EU countries continued with their unconstructive approach regarding Turkey, the country would seek other paths for itself, while emphasizing the idea that he strongly values partnership with NATO ally U.S.

Erdoğan underlined that elections do not produce dictatorships, refuting claims that the referendum will bring one-man rule in the country, stating: "Look, a dictator does not emerge from the ballot box. A dictator arrives by very different paths. It is certain that in some places he arrives through military takeovers."

In his conversation with Al Jazeera, Erdoğan also evaluated Turkey-EU relationships, stating that in the course of the referendum some European countries had in fact 'declared war' on Turkey. He noted that such countries disregard Turkey's performance in a civilizational contest in the areas of education, health, justice, security, transport, energy, food-agriculture, in all its investments in infrastructure and superstructure. He added that Angela Merkel, who in contrast with other world leaders, had not yet congratulated him for the referendum results.