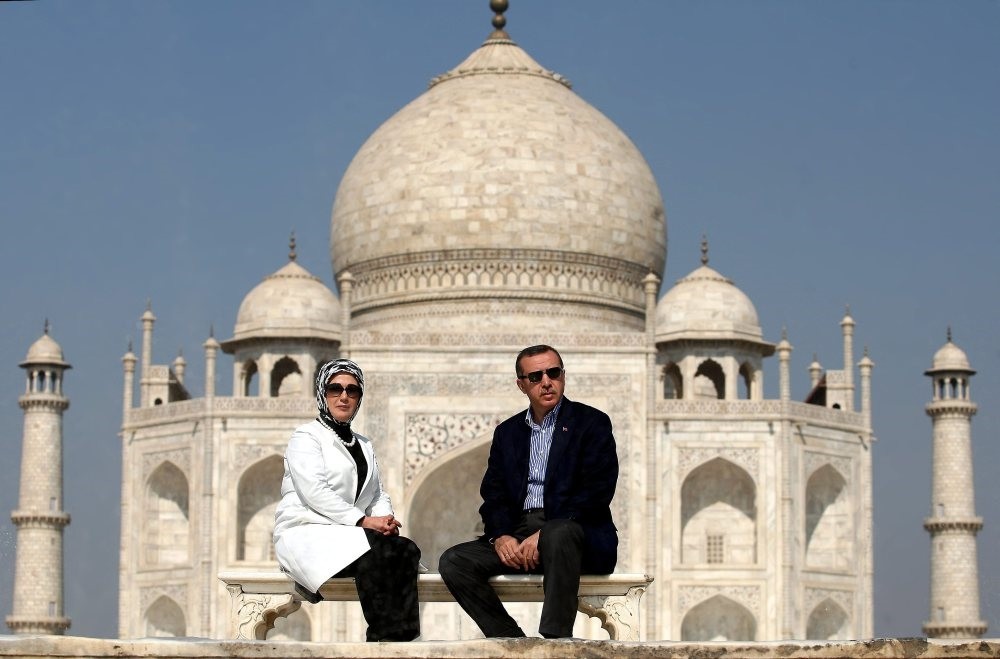 President Erdou011fan's visit to India is expected to witness the signing of a cultural exchange program between the two countries.
by Daily Sabah with AA Apr 29, 2017 12:00 am

After claiming victory in the historic referendum, President Erdoğan visits India to further develop political relations and increase cooperation in trade ties and the fight against terror. During the visit, the issue of FETÖ will also be discussed, as Turkey will ask India to take steps against the terror group

President Recep Tayyip Erdoğan is departing for India on April 30, a first official visit at the presidential level in seven years, which is expected to enhance the already strong political relations.

The visit to India, where he will be meeting Indian President Pranab Kumar Mukherjee, Vice President Hamid Ansari and Prime Minister Narendra Modi, is the first international trip after the April 16 victory on the referendum for the constitutional amendments.

Erdoğan will be participating in the Turkey-India Business Forum on the first day of his stay on April 30, in addition to diplomatic meetings with state officials.

During the bilateral meetings, the agenda is expected to focus on anti-terror efforts, political relations, bilateral trade and economic cooperation.

Turkey has an embassy in New Delhi and also two consulates in Mumbai and Hyderabad. The number of visits at ministerial and high-level bureaucratic levels between India and Turkey over the past five years has exceeded the total of the previous 20.

The fight against the Gülenist Terror Group (FETÖ) is expected to be discussed during the visit. According to Turkish officials, there are six schools, two private teaching institutions, three dormitories and various companies and foundations associated with FETÖ in India. Turkey expects India to take steps in the fight against FETÖ. Meanwhile, Erdoğan's visit is expected to witness the signing of a cultural exchange program between the two countries as well.

The Turkish president paid a visit to India in 2008, when he was a prime minister, and former President Abdullah Gül also paid a visit to the country in 2010 after 15 years of no official visits at the presidential level.

"The fact that the visit is taking place after the referendum is particularly important, as Turkey is shifting to a new system. With the visit, Erdoğan wants to build stronger relationships with strong global actors such as India, setting the tone of its new foreign policy," Demir said.

He added that the two nations of Turkey and India have strong historical ties as the builders of Asian civilizations throughout history.

Turkey has closer ties to Pakistan, which has conflicting relations with India over the autonomous region of Kashmir.

Demir added that Turkey, being close to both India and Pakistan, could become a bridge between the two nations regarding the problem of Kashmir, which has been keeping the region preoccupied.

"If the Kashmir issue is not solved among the regional powers themselves, then this creates openings for global powers to exploit the issue to serve their own interests," Demir added.

India's President Pranab Mukherjee visited Turkey in October 2013, which was the first visit at this level in 15 years.

President Erdoğan and Indian Prime Miniser Neranda Modi also met in 2015 during the G20 countries leaders meeting in Antalya, Turkey and later in China's Hangzhou on Sept. 4-5, 2016 for the G20 leaders' summit.

India, which is a member of the Group of 20 (G20), is also one of the BRICS (Brazil, Russia, India, China and South Africa) countries — the five major emerging national economies. India has strong diaspora communities in the United States, the United Kingdom, as well as in some African and Gulf countries. The country has been labeled one of the fastest growing economies in recent years and aims to become one of the permanent members of the United Nations Security Council. In recent years, the number of tourists visiting Turkey from India has steadily increased. In 2012, 73,731 Indian tourists visited Turkey, this number rose to 90,934 in 2013, to 95,014 in 2014, and to 131,250 in 2015.