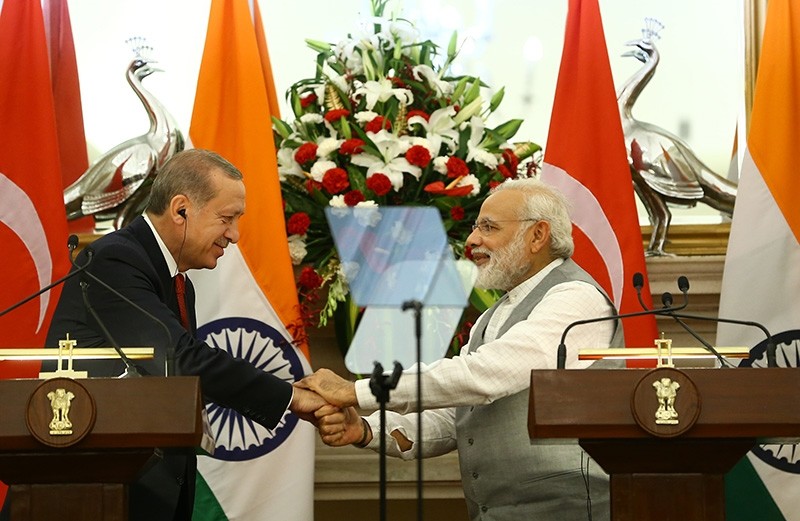 President Recep Tayyip Erdou011fan and Indian Prime Minister Narendra Modi shake hands during a joint press conference in New Delhi, India, on May 1, 2017. (AA Photo)
by Daily Sabah May 01, 2017 12:00 am

President Erdoğan said Turkey-India cooperation against terror is crucial, while criticizing the UNSC for being dysfunctional in the face of global crises and for its lack of just representation, calling for structural reform within the UNSC

On the second leg of a two-day official visit to India, President Recep Tayyip Erdoğan highlighted the significance of cooperation with India regarding the counterterrorism fight for regional stability during a joint press conference with Indian Prime Minister Narendra Modi in New Delhi on Monday.

President Erdoğan began his remarks by condemning the terror attack in India on April 24, saying, "Turkey, as a country that is engaged in a fight against some of the most dangerous terror groups in the world, understands very well the pain of our Indian friends. Turkey stands in full cooperation with India in its fight against terror."

Erdoğan highlighted that during meetings with Prime Minister Modi, the delegates of the two countries spoke on bilateral trade as well as political, economic, and counterterror cooperation, underlining that Turkey and India have the potential to be the leading contributors to regional stability and peace.

"We have been the countries serving as the cradle of civilizations throughout history. With such exceptional backgrounds, I believe that our cooperation is crucially important. India and Turkey could play very important roles in establishing peace, stability and justice on a regional and global scale."

President Erdoğan was welcomed by Indian President Pranab Mukherjee and Prime Minister Modi at the presidential palace in New Delhi in an official ceremony.

Erdoğan laid a wreath at a monument honoring the memory of Mahatma Gandhi as part of the ceremonies.

Prime Minister Modi, speaking prior to President Erdoğan, also emphasized the importance of cooperation against terror, saying, "Mr. President and myself have decided to work together bilaterally in multifaceted cooperative efforts to deal with this evil."

"I held an extensive conversation with the president on this subject [terrorism]. We agreed that no intent or goal, no reason or rationale can validate terrorism," Modi said.

After his visit to India, President Erdoğan will also visit Russia, China and the U.S. and is also expected to attend a NATO summit in Brussels during the month of May in a series of visits scheduled in the wake of his victory in the April 16 referendum on the constitutional amendments.

'UNSC structure must be reformed'

The restructuring of the U.N. was another topic highlighted during Erdoğan's visit to India. Prime Minister Modi said he agrees with President Erdoğan's argument that the U.N. Security Council (UNSC) must include more members to reflect the diversity of U.N. member states. Modi said the UNSC must represent the values and conditions of the 21 century, not that of the past. Erdoğan was conferred an honorary doctorate by New Delhi's Jamia Millia Islamia University during his visit.

During the ceremony, Erdoğan criticized the UNSC for not having just representation, similar to Modi, and for being silent in the face of the Syria crisis. President Erdoğan often says that the structure of the UNSC is not just, adding that a major global decision should be made or rejected by the sole decisions of the five permanent members. In addition, he criticized the council's structure for not having a Muslim member state.

"The United Nations, and especially the Security Council's structure, must be reformed immediately. For instance, who can say that the Security Council, which does not have India, one of the most important countries in the world with a population of 1.3 billion people, is a healthy structure?" Erdoğan said.

"If Assad, who has killed almost a million people and is responsible for state terrorism, is still able to be the head of state in Syria, despite the U.N., then there is nothing left to say," the president added. The Turkish president spoke on Turkey's open-door policy for Syrian refugees, saying Turkey will not close its doors to victims of the conflict in Syria.

Meanwhile, President Erdoğan also wrote an article titled, "An old, rock solid friendship: Inspired by the past, India and Turkey must walk together towards the future," for The Times of India, where he highlighted the strength of bilateral ties between Turkey and India, as well as Turkey's role in regional matters. "Turkey is pursuing a multi-dimensional and proactive foreign policy toward generating peace and stability in its region and beyond. Developing our relations with our neighbors and the countries in the region, opening to new geographies, deepening our strategic relations, playing an active role in international organizations are the basis of our entrepreneurial and humanitarian foreign policy," he said in the article.

'India expected to fight against FETÖ'

The Turkish delegate during the visit communicated the threat of the Gülenist Terror Group (FETÖ) as one of the most dangerous terror groups to his Indian counterparts, emphasizing this during a joint press conference with Prime Minister Modi and adding that he believes India will take concrete steps against the group. "The group, which acts under the disguise of legal associations, is not only a threat to our country but it is a serious threat to other countries where they operate," Erdoğan said.

According to Turkish officials, there are six schools, two private teaching institutions, three dormitories and various companies and foundations associated with FETÖ in India. Turkey expects India to take steps in the fight against FETÖ. Meanwhile, Erdoğan's visit is expected to witness the signing of a cultural exchange program between the two countries as well.

"I believe that our friend India will clear the country [India] of FETÖ with the measures it will take," the president said, adding that his Indian counterparts were informed about the ways in which the group operates to infiltrate state organizations, schools and businesses. Led by U.S.-based imam Fetullah Gülen, FETÖ sought to topple the Turkish government and seize power on July 15 through a military coup and impose martial law. In total 249 people were killed by pro-coup soldiers, while over 2,000 people were injured.