Turkey and Russia in favor of political solution in Syria, Erdoğan says 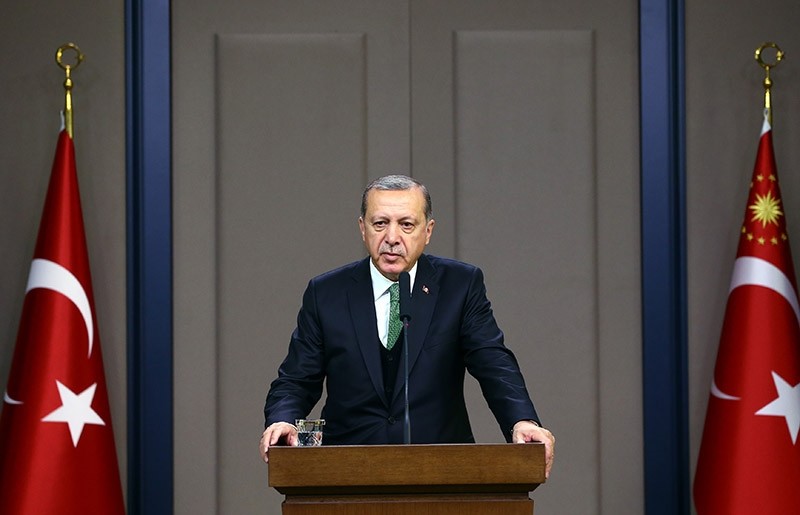 Political solution in Syria is the mutual goal for Turkey and Russia, President Recep Tayyip Erdoğan said Wednesday, as he highlighted that both countries will discuss a series of ongoing issues during his visit to Russia.

Speaking at a news conference before heading to Sochi, Erdoğan said that the most important topic of his visit will be Syria, while noting that it is "about time" countries involved in Syria take a constructive step.

"There is an effective cooperation with Russia on Syria. Our main aim is to stop the bloodshed in Syria as soon as possible and reach a political solution while protecting territorial integrity of the country," Erdoğan said.

"We cannot stay silent any longer to baby killings and massacre of people in hospitals," he said. "We pay the utmost respect to fortify the ceasefire that was agreed on Astana talks."

Syria has been locked in a vicious civil war since early 2011, when the Assad regime cracked down on pro-democracy protests. Since then, hundreds of thousands of people have been killed and more than 10 million displaced.

The latest Astana talks that was held on May 3-4 focused on the cease-fire that came into effect on Dec. 30, have been brokered by Turkey -- which backs the Syrian opposition -- and Russia and Iran, who support the Bashar al-Assad regime.

The fifth meeting between President Erdoğan and Vladimir Putin is scheduled to take place Wednesday in Sochi. The amelioration of economic relations, including visa requirements and trade restrictions, is listed among the meeting's agenda items.

The president said that he and Putin are "working very hard" to revitalize the Russia-Turkey relations.

"Neither Turkey nor Russia can waste any more minute to bureaucracy," Erdoğan said. "If we want to achieve $100 billion trade volume, we need to encourage that."

During the press conference, Erdoğan has refuted claims regarding possible Cabinet reshuffle in the government.

"There is nothing like that in the government's agenda. The chairman (Binali Yıldırım) did not suggest me anything like that," Erdoğan said, a day after rejoining ruling Justice and Development Party (AK Party).

Erdoğan led the AK Party for 13 years starting in 2001 but had to step aside when he became president in August 2014, due to a legal requirement for presidents to be politically neutral.

When asked about the possible changes in the party's Central Decision Board (MKYK) and the party's administration after his reelection as AK Party's chairman on May 21, Erdoğan said he would "reconsider and reevaluate the current units in the party after serious discussions."

Erdoğan underlined that these things would happen "if I would be reelected."