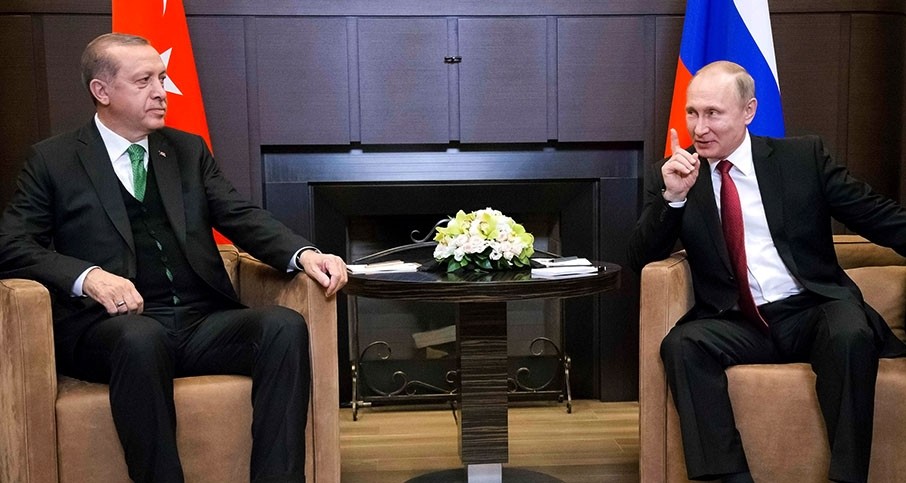 Russian President Vladimir Putin has said that he is opposed to the idea of a separate [Kurdish] state in northern Syria, confirmed President Recep Tayyip Erdoğan Thursday on his return from a state visit to Russia's Sochi.

"Putin said, 'establishing a Kurdish state in northern Syria would disturb Turkey, we are aware of that.' We do not welcome such development either. We had discussed this issue earlier. Now, with different steps, we will respond to any threat that originates in the region. We voiced our concerns and he does not find these concerns abnormal," President Erdoğan told journalists.

The president also said that he expressed his concerns to Putin regarding photos of Russian soldiers beside the PKK-affiliated Peoples Protection Units (YPG) forces in Syria's Afrin. The Russian president assured him that he would examine the photos.

"The next step is now up to Putin. We explained the situation to them. We hope they will be determined in this regard as well and there will not be negative developments," the president said.

The relationship between Turkey and Russia have been fully restored, President Vladimir Putin said in a meeting with President Recep Tayyip Erdoğan in Sochi Wednesday, where the two leaders discussed the latest developments in bilateral relations and the Syrian crisis.

Erdoğan also said that he hopes the creation of de-escalation zones in five Syrian regions, including Idlib, will solve 50 percent of the conflict in Syria.

Russian negotiator Alexander Lavrentyev said that Russia hopes to negotiate a memorandum with Turkey and Iran to establish four de-escalation zones in regions where most intensive fighting is taking place between the Assad regime forces, Jabhat al Nusra and the moderate opposition.

The Syrian opposition, which suspended its participation in the Astana peace talks and demanded an end to Assad regime bombing of areas under its control, announced Thursday that they will return to the negotiating table.

Meanwhile, Erdoğan noted that he will hold a trilateral meeting with Russian and Chinese presidents Vladimir Putin and Xi Jinping in his upcoming visit to China.

The president also said that he told Putin about his concerns regarding the photos of Russian soldiers beside PKK-affiliated Peoples Protection Units (YPG) forces in Syria's Afrin, and the latter told him that he would examine the photos.

Turkey and Russia have played a key role in stopping the bloodshed in the Syrian war by agreeing on the evacuation of Aleppo in late December of last year, which was described by Putin as "the biggest humanitarian operation in the world," and subsequently established a nationwide cease-fire in the war-torn country. Along with Iran, the two countries also took the initiative to bring together the Assad regime and the Syrian opposition in Astana to sustain a cease-fire agreement and to negotiate for a political transition in the country.