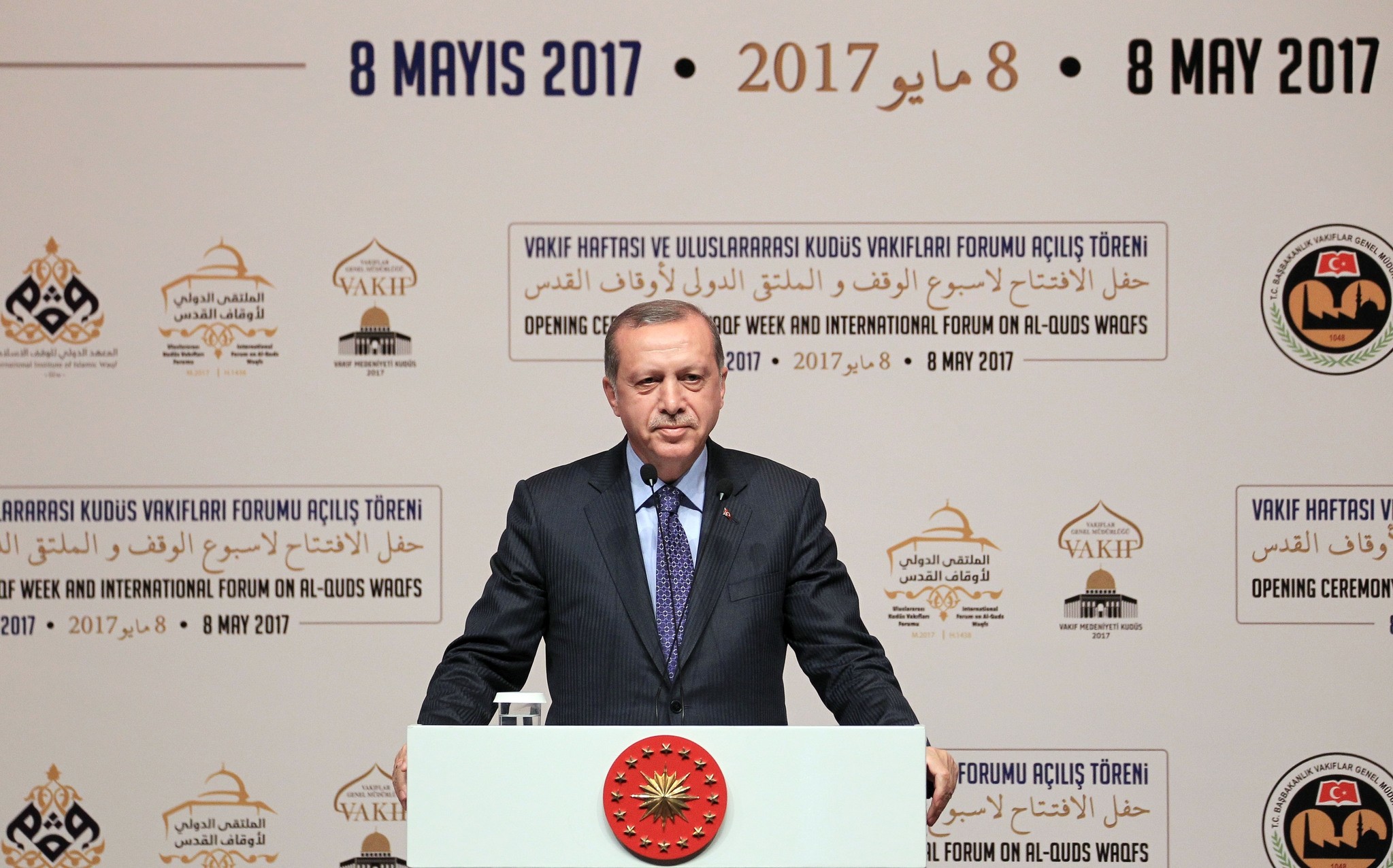 President Recep Tayyip Erdoğan expressed Turkey's support for the Palestinian fight against the Israeli occupation of Jerusalem, calling on Turks to visit the Al-Aqsa Mosque often to protect the Muslim identity of the Holy place.

Speaking at the Al-Quds Forum in Istanbul, Erdoğan said Turkey places great importance on Palestinians' justified resistance and it will not let Israeli attempts change the status quo at the Al-Aqsa mosque.

"As a Muslim community, we need to visit the Al-Aqsa Mosque often, each day that Jerusalem is under occupation is an insult to us."

"It is impossible to establish peace in the region if the international law remains indifferent to massacres and cruelty," he said.

Erdoğan also said Israel's policy towards Muslims is like that of the United States against black people in the past and blamed the Israeli administration of implementing an apartheid regime.

"The bill to ban the Adhan (call to prayer) is pending at the Israeli parliament. It is disgraceful for those who lecture us about the freedom of religion to turn a blind eye to this attempt. Turkey will not let these attempts against freedom of belief [prevail]," Erdoğan said.

"Why are they afraid of the call to prayer? Are they unsure of their own fate? We do not and will not treat our Jewish citizens like that."

The president also commented on the U.S. plan to move its embassy to Jerusalem, stating that the "ill-advised" move should be dropped from the U.S.'s agenda.

"It is not a simple location change. Those who think that way are not aware of how delicate the balance is in the Holy Land."

The West Bank and East Jerusalem have been under Israeli occupation since the 1967 Middle East war. Palestinians demand those territories along with the Gaza Strip back to establish a state, but peace talks have stalled since 2014. Palestinians see Israeli settlements as a major obstacle to reach a peace agreement, and want them dismantled.

The international Forum on Al-Quds Waqfs brought together representatives of foundations, experts, academics, ministers and high-ranking officials from around the world in Istanbul to discuss the state of Muslim heritage in Jerusalem.

The two-day forum that started on Monday will look into ways to address the needs of Palestinians and the preservation of Muslim legacy in Jerusalem where the Al-Aqsa Mosque, one of the holiest sites in Islam, is located.