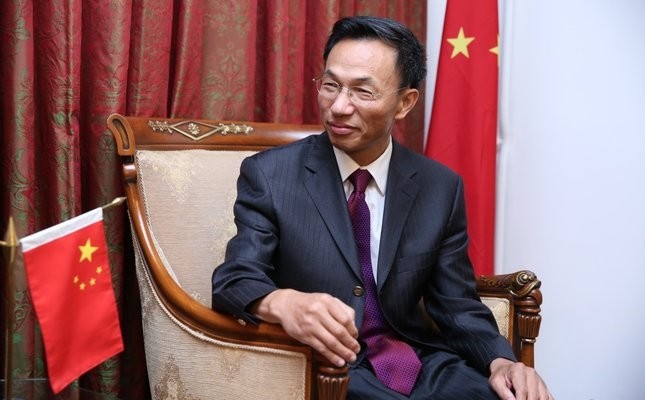 Chinese Ambassador to Turkey Hongyang said the Belt and Road initiative will accelerate the common development of our countries and strengthen international cooperation. Underlining Turkey' s significance in the project, he added that China is ready to evaluate Turkey's membership in the Shanghai Cooperation Organization

World leaders, including President Recep Tayyip Erdoğan, have gathered in the Chinese capital Beijing to attend the international One Belt, One Road (OBOR) summit. Apart from multi-party meetings, President Erdoğan will meet with his Chinese counterpart, Xi Jinping, the fourth time the two leaders will come together in the last two years. 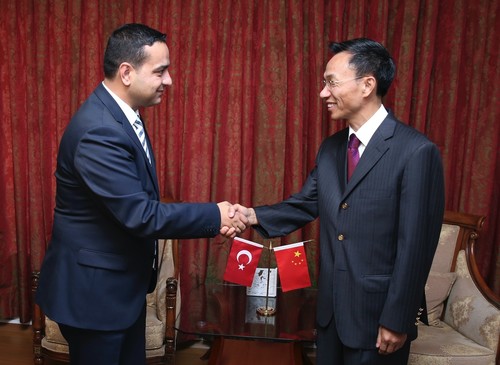 Speaking to Daily Sabah prior to the summit, Chinese Ambassador to Ankara Yu Hongyang said that the main objectives of the summit is to strengthen international cooperation, joint construction of OBOR, reshape shared benefits and ensure unrestricted access. Underlining Turkey's significance to the OBOR initiative, Ambassador Hongyang said that Turkey is a critical country in the construction of the "Belt and Road" and a natural partner in cooperation. Meanwhile, he stated that China is ready to launch further initiatives with Turkey to advance the harmonization of development strategies.

Hongyang added that the Belt and Road initiative will accelerate the common development of our countries and strategic cooperation between China and Turkey will gain momentum after this summit.

Commenting on China's position regarding resolution of the Syrian civil war, the ambassador said that China expects the international community and the various parties in Syria to continue accelerating the process of political solution by fully utilizing the related dialogue mechanisms, strengthening contacts and by increasing mutual trust.

Yu Hongyang: President Erdoğan will go to China, at the invitation of his Chinese counterpart, President Xi Jinping, to attend the Belt and Road International Cooperation summit. Erdoğan will have a bilateral meeting with President Xi Jinping during his visit. This will be the fourth meeting between these two leaders over the course of the last two years. The two leaders will engage in a comprehensive exchange of ideas regarding areas such as politics, economy, culture and security and jointly set out a development plan for bilateral relations for the upcoming period, identifying prominent areas for cooperation. They will also preside over the signing of cooperation agreements for related areas between the two sides.

We strongly believe that the meeting of the two leaders will yield fruitful results and help advance bilateral relations. The two sides will evaluate with the utmost attention the historic opportunities to be presented by the joint construction of the "Belt and Road" and implement the course of policy agreed upon by the two leaders. Thus, they will accelerate the achievement of further advancements in strategic relations between China and Turkey.

The main objectives of the summit are strengthening international cooperation, joint construction of the One Belt, One Road, reaping shared benefits and ensuring unrestricted access. In other words, ensuring unhindered access with regard to infrastructure, financing, trade and harmonization of wider goals.

DS: Could you provide more details about the scope of the OBOR summit please?

YH: The upcoming One Belt, One Road summit forum is among our highest-level meetings. Top government officials from 28 countries, including Recep Tayyip Erdoğan, have announced they would attend the meeting at the invitation of our President Xi Jinping. Again, 61 international organizations, government officials, scientists, entrepreneurs, finance institutions, media groups and nearly 1,200 people from 110 countries will also participate in various programs within the summit forum.

The summit is intended primarily to achieve unhindered access in the five key areas of politics, infrastructure, trade, financing and convergence of goals as part of the wider aims of bolstering international relations, constructing the "one belt, one road" in collaboration and obtaining shared benefits.

The subjects to be discussed include ensuring integration of policies related to development strategies, creation of innovation mechanisms, interconnected development, unrestricted access, access to welfare, achieving an increase in productivity, deepening economic cooperation, creation of new investments, building ties regarding common goals, and constructing the Silk Road in collaboration with a think tank.

The roundtable summit, which will be held with the attendance of leaders, is a key event in this forum. It will be held in two stages. The first stage will focus on the integration of policies and development strategies and furthering of partnership. The second stage will center on improving substantial cooperation through mutual and unhindered access. Also, various meetings with the theme "cooperation between societies and cultures" will be held.

President Erdoğan will also attend the high-level meetings and the roundtable summit. In addition, ministers of Economy and Natural Resources, and Transport, Maritime Affairs and Communications from Turkey will participate in the summit.

DS: Turkey lies in OBOR's middle corridor, which is considered to be the fastest transfer route for Chinese goods heading to Europe. In this respect, how does China value Turkey's role in this project?

Located at the confluence of Asia and Europe, Turkey is an important bridge on the ancient Silk Road. Thus, Turkey is a critical country in the construction of the "Belt and Road" and a natural partner in cooperation.

At the same time, it is a significant member of the Asian Infrastructure Investment Bank (AIIB). China attaches great importance to speeding up cooperation with Turkey in every area within the framework of the "Belt and Road." The "Middle Corridor" plan, which has been proposed by Turkey, is directly compatible with the "Belt and Road" initiative.

The two sides have signed a memorandum of understanding regarding cooperation for the integration of the "Belt and Road" initiative with the "Middle Corridor" plan. China is ready to launch further initiatives together with Turkey to advance harmonization of development strategies, lay greater emphasis on programs involving the construction of large-scale infrastructure facilities and cooperate in areas related to people's daily lives.

China is also looking forward to develop third markets jointly and further deepen cultural contacts and cooperation. China believes that if the two parties realize their respective advantages adequately and accelerate the construction of the "Belt and Road" in collaboration, interconnected development of countries along the route will gain speed and this, in turn, will bring benefits to the peoples of both countries and to those of other countries along the route.

DS: It was announced last year that Chinese companies were negotiating with their Turkish partners about the Edirne-Kars high-speed railway. What are the latest developments about this project?

China gives great importance to cooperation with Turkey in the field of high-speed rail. Currently, the two sides are engaged in intense efforts toward cooperation in concrete initiatives. It is expected that new developments regarding cooperation between the two countries will continue unabated.

The Shanghai Cooperation Organization aims to bolster mutual trust and friendship among member nations, promote effective cooperation initiatives among member countries in such areas as politics, economy, technology and culture and maintain and guarantee regional peace, trust and stability. It also aims for joint efforts for the creation of a democratic, fair and rational political and economic international order.

DS: Could you please explain China's position regarding the resolution of the Syrian civil war?

For a long time now, China has argued that the only correct and viable approach to the Syrian issue is a political solution. It is up to the Syrian people to decide the future of Syria. And the United Nations should play a decisive role with regard to Syria. In this respect, the Astana dialogue meetings serve as a helpful complement to the Geneva Peace Talks.

China expects the international community and the various parties in Syria to continue accelerating the process of political solution by fully utilizing the related dialogue mechanisms, strengthening contacts and by increasing mutual trust. China will continue to play an active and constructive role, together with the international community, including Turkey, to resolve the Syrian issue in a viable manner as soon as possible.