Erdoğan to ask Trump not to follow Obama's footsteps 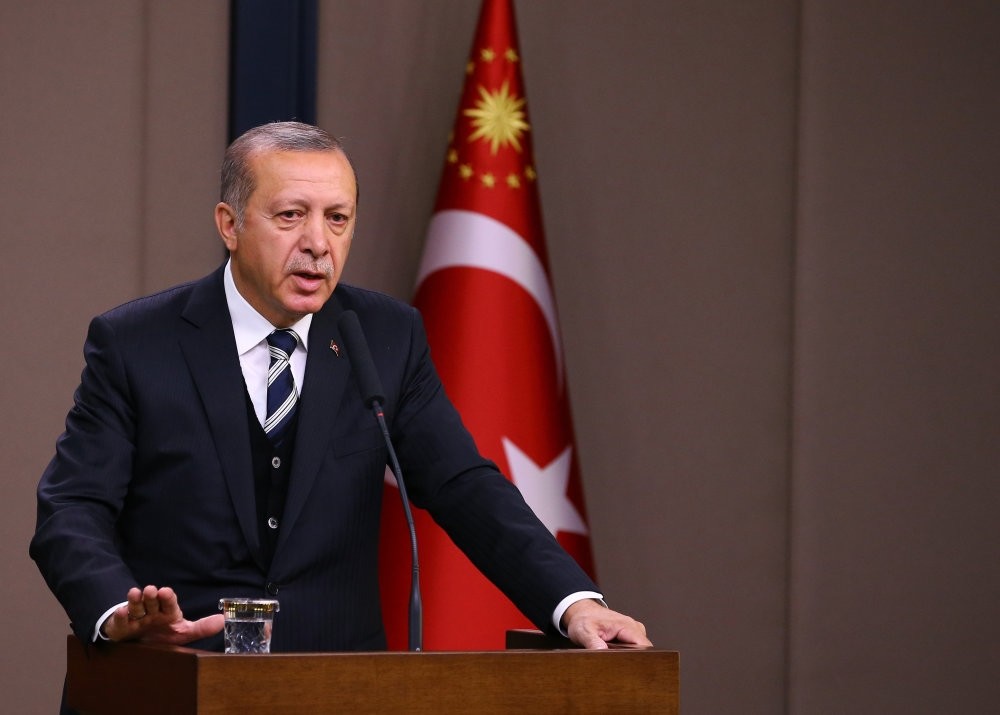 President Erdou011fan sees the meeting with U.S. President Trump as a ,milestone, in ties between Ankara and Washington.
by Hasan Ay May 16, 2017 12:00 am

President Erdoğan will come together with the U.S. President Trump in their first face-to-face meeting, where the two leaders will discuss bilateral issues and strained ties, including the U.S. arms support of the YPG, the fight against Daesh and the extradition of FETÖ leader Gülen

PresIdent Recep Tayyip Erdoğan, earlier last week, described his meeting with the U.S. President Donald Trump scheduled for today would be a "milestone" in Turkey-U.S. relations, which have been significantly strained in recent years, particularly in the second term of former U.S. President Barack Obama. The leaders were expected to discuss U.S. support to the PKK-linked Democratic Union Party's (PYD) armed wing, the People's Protection Units (YPG), the fight against Daesh, and the extradition of Gülenist Terror Group (FETÖ) leader, Fetullah Gülen.

The U.S.'s military support to the YPG will be among the top priority issues on the table during the two leaders' first face-to-face meeting today. The U.S. has provided military and arms support to the Syrian Democratic Forces (SDF), which is predominantly led by the YPG.

President Erdoğan will communicate Ankara's concerns about this sensitive issue to the U.S. president, particularly since the YPG is considered a terror organization by Turkey and is a national security threat along its southern border with Syria.

Erdogan is expected to give the message that supporting one terrorist group against another is wrong, particularly when it is done ignoring concerns voiced by Turkey, a strategic ally of the U.S.

Erdoğan hopes to turn a new page in Turkey-U.S. ties with the Trump administration, as a new step to fixing relations, strained during Obama administration.

President Erdoğan has recently said that some of the recent decision made against Turkey's interests by the U.S., particularly arming the YPG, are a result of the presence of officials who were appointed by the Obama administration.

"America is going through a transitional period currently. Due to this transitional period, we [Turkey] must be more careful and sensitive here at home. Our expectations from the U.S. include previous unresolved matters, including the armed supported given to the YPG. This heavy weaponry is not ordinary weaponry … This is obviously a matter that is against the strategic cooperation we have with the U.S., and the developments are against our strategic agreements. We obviously do not want them to happen, thus we will address and discuss these issues," Erdoğan added.

Brett McGurk, the Obama-appointed U.S. Envoy for the Global Coalition to Counter Daesh, is seen to be too close to the YPG by many in Ankara. He is also among the architects of the U.S.'s Syria policy in the administration.

McGurk kept his position after intense lobbying with the Trump transition team, citing his past track record in the George W. Bush administration.

The U.S. military and arms support to the YPG, Ankara argues, ultimately affects Turkey's national security, as there is a fluidity in logistics and arms between the YPG and the PKK. Meanwhile, the U.S. has argued that the YPG-led SDF is the most effective partner against the Daesh terrorists in Syria.

President Erdoğan completed his two-day official visit to China's Beijing yesterday and left for Washington for the bilateral meetings set for today and tomorrow. Erdoğan reached Washington late yesterday and stayed at the Blair House last night, ahead of his meeting with Trump at the Oval Office today.

Previously, both leaders spoke over the phone after Trump was elected and after the referendum in Turkey, in addition to increased diplomatic traffic between the two countries.

Turkey has no alternative in fight against Daesh

At the meeting, Ankara will also tell Washington that in order to achieve success in the fight against Daesh in Syria, Turkey must be included in operations, but not terror groups, such as the YPG.

Turkey successfully cleared its southern border from the Daesh terrorists with its Operation Euphrates Shield, launched on August 24.

Erdoğan will also inform Trump of Turkey's plan to liberate the Syrian town of Raqqa from Daesh, highlighting the importance of a strategic model partnership and NATO alliance between the two countries.

In addition, the political transition in Syria and the latest developments in Iraq will also be discussed.

Extradition of Gülen to be demanded

Meanwhile, extradition of the FETÖ leader, who has been living in the U.S. since 1999, will also be on Erdoğan-Trump agenda.

Earlier last week, Erdoğan said that during the meeting with his U.S. counterpart, he will discuss the issue comprehensively.

"In my opinion, the U.S. should not become the hatchery of FETÖ," he had said in Ankara Friday, before flying off to China.

Ankara has previously said that the U.S. is delaying the extradition process due to political motivations, despite Turkey providing boxes of evidence that links Gülen to last year's July 15 coup attempt.

The failed coup attempt, which left 248 people dead and nearly 2,200 injured, was organized by followers of Gülen, who has lived in self-imposed exile in the U.S. state of Pennsylvania since 1999.

Meanwhile, in an attempt to reinvigorate the trade volume between the two NATO members, partnership in the defense industry is also expected to be discussed during Erdoğan's visit.