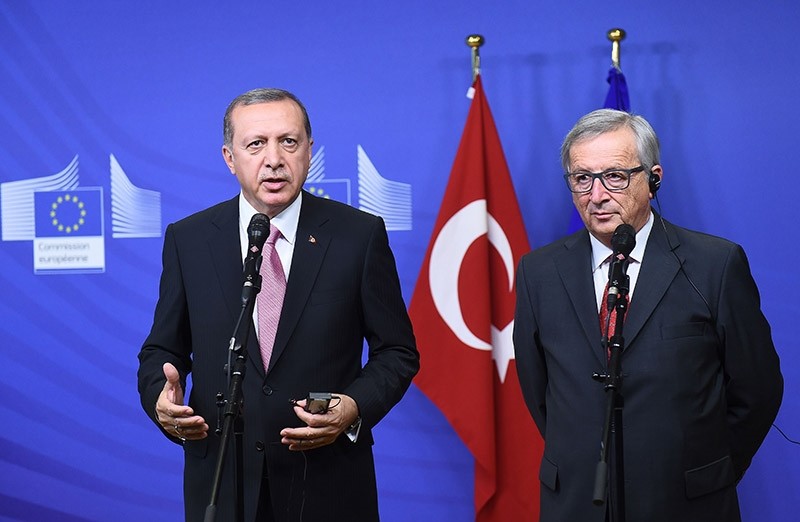 President Recep Tayyip Erdoğan will meet with top European Union officials next Thursday in Brussels to discuss relations between both sides before the NATO summit.

The EU announced Friday that Council President Donald Tusk and Commission President Jean-Claude Juncker will host the Erdoğan for a bilateral meeting ahead of the NATO summit later in the day.

Earlier this month, Erdoğan told Brussels it had no other "option" than to open new "chapters," or policy areas, in Turkey's long-stalled accession talks which began in 2005.

Relations between Turkey and the EU soured after the bloc failed to fulfill its promises as part of the refugee deal, including granting visa free travel for Turkish citizens in the Schengen zone.

On the financial side, the EU allocated only 750 million euros ($797 million) so far for the care of the refugees in Turkey, far below the pledged 3 billion euros promised to the country that has been a hub for refugees from all-around the world due to its position a gateway to Europe from the Middle Eastern and Asian countries.

The European Parliament approved a non-binding motion to freeze EU-membership talks with Turkey, in response to post-coup investigations and recent developments in the country including measures taken within the framework of the fight against the PKK and Gülenist terror groups.

Turkey has also criticized the bloc for failing to condemn the deadly coup attempt by Gülenist Terror Group (FETÖ), and harboring coup perpetrators. During the presidential election campaign, Turkey also slammed the EU for allowing PKK terrorist supporters to hold rallies, while member states prohibited the rallies in favor of President Erdoğan.

Foreign Minister Mevlüt Çavuşoğlu insisted at the time that Turkey was not seeking to become an adversary to the EU, but complained about the approach.

He said only 16 policy chapters had been opened out of a total of 35 since the negotiations began, even though Ankara's bid to be a part of the bloc dates back to the 1960s.