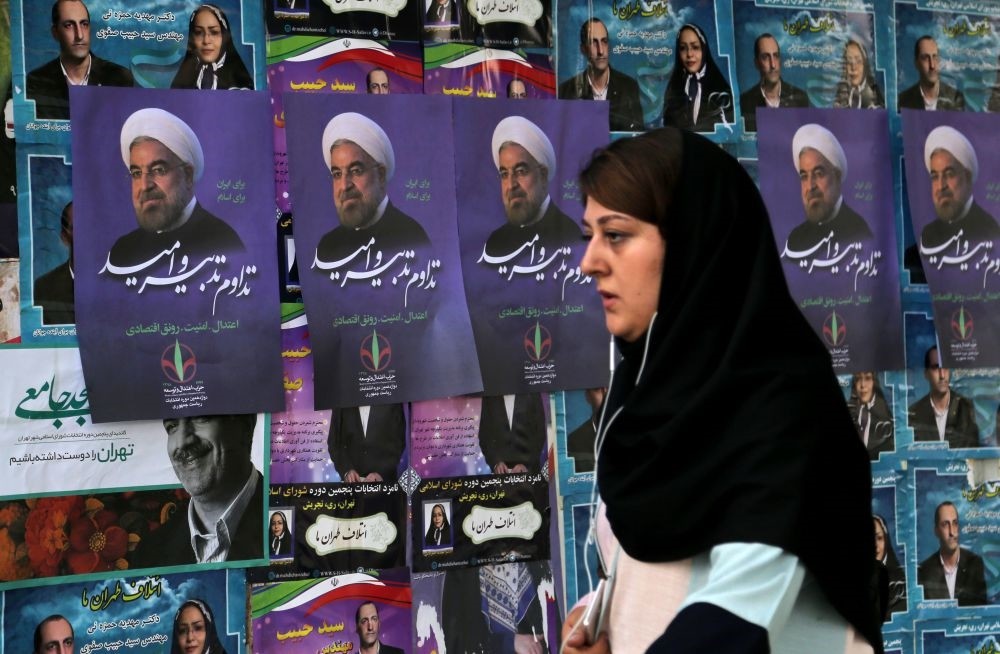 An Iranian woman walks past a wall plastered with election posters of Iranian President and candidate in the upcoming elections, Hassan Rouhani, in capital Tehran on May 18, 2017.
by Merve Aydoğan May 19, 2017 12:00 am

Although today's results will be crucial both in determining the country's path in foreign policy for the new presidential period and for the municipal council that will be elected on the same day, relations between Turkey and Iran are unlikely to change, regardless of election results, experts say

Turkey's longstanding neighbor Iran is holding its breath ahead of the 12th presidential elections due to be held today, as current Iranian President Hassan Rouhani is expected to win the elections against his strongest opponent, Ebrahim Raisi. While experts do not anticipate major changes to the country's foreign policy, particularly if Rouhani wins the elections, today's results will be crucial not only in determining the country's path in foreign policy for the new presidential period, but also for the municipal council that will be elected on the same day as well. As Iran's incumbent President Rouhani pledges to reduce the country's international isolation and grant more freedoms at home, his opponent Raisi is a jurist and Shiite cleric who studied at the feet of Supreme Leader Ayatollah Ali Khamenei.

Raisi is a strong critic of Rouhani's record in terms of economic policy and his policy of détente with the West. On that note, a report by the Eurasia Group described the Iranian elections as a "roller coaster" and said that the withdrawal of Tehran Mayor Mohammad Baqer Qalibaf from the presidential race has steered Rouhani down a "straighter path to reelection."

The report stated that "Running against Raisi will help Rouhani energize his base and probably increase voter turnout among his supporters," further noting, "Rouhani has a good chance of reelection" when considering polling numbers. In regards to Raisi, the Eurasia Group stated that "He lacks charisma and has put forward few concrete ideas on the economy, hurt by his very conservative background in the judiciary and his involvement in executions."An analysis entitled, "Iranian Elections: More than Just the Presidency," penned by Al-Sharq Forum expert Abdullah Yeğin affirmed that "The electoral process will have a wider influence than simply selecting a president." While noting that the fate of Iranian-Western relations depends on the election results, Yeğin wrote that "Conservatives like [former Iranian President] Ahmedinejad will not give up directly attacking the system, nor will reformists or moderates who are trying to elect a name like President Rouhani as a new leader cease their fight within the system."

Though the presidential race in Iran initially began with six candidates, the number has now dropped down to four, including current President Rouhani, Raisi, former Iranian Vice President Mostafa Hashemitaba and former Minister of Culture and Islamic Guidance Mostafa Mirsalim. In that regard, Bayram Sinkaya, a prominent academic and expert on Iran, commented on the matter to Daily Sabah and said that neither Hashemitaba nor Mirsalam has a good chance of winning the elections, noting that all of the traditional conservatives, technocrats as well as reformists and supporters of former President Akbar Hashemi Rafsanjani have gathered around Rouhani. Sinkaya touched upon Iran's foreign policy in the upcoming period and said, "The elections in Iran will not affect Iran's foreign policy; especially its policy in the Middle East, as much. In fact, foreign policy matters are not brought up during the campaigning period; the campaign has mainly focused on domestic politics, corruption, poverty and economic matters."

He continued by adding that in case of Rouhani being re-elected, the current foreign policy of Iran is to be maintained, while Sinkaya said, "Raisi has yet to clearly set forth his vision on foreign policy. However, it is expected that he will conduct more irreconcilable, ideological and hardcore policies in foreign matters. Regardless of who is elected in Iran, the policies of regional countries and the U.S. will shape Iran's foreign policy.… In case of Iran engaging in conflict with regional countries or the U.S., Turkey's friendship will be significant for Tehran, but Turkey's position in such case will be the determinant." Similarly to Sinkaya, an expert from the Ankara-based Center for Iranian Studies (IRAM) Mehmet Koç also said that both Mirsalim and Hashemitaba do not have great chances in the elections, indicating that Rouhani is likely to get re-elected.

Koç informed Daily Sabah that Raisi is the indirect candidate of supreme leader Ayatollah Ali Khamenei. While Raisi was appointed as the head of Astan Quds Razavi Foundation by Khamenei, the largest foundation in the country and highly influential in terms of economics, Koç also reminded Daily Sabah that Raisi's past does not include political affiliations, adding that he is a strong conservative figure. "Relations between Iran and Turkey will not experience major changes with Rouhan and, in fact, may be even further enhanced not only with Turkey but also with other countries in the region as well.…However, with Raisi's foreign policy, we may even see the derailing of bilateral relations between Turkey and Iran," Koç added.