Turkey to push for stronger commitment on terror, EU ties at NATO summit 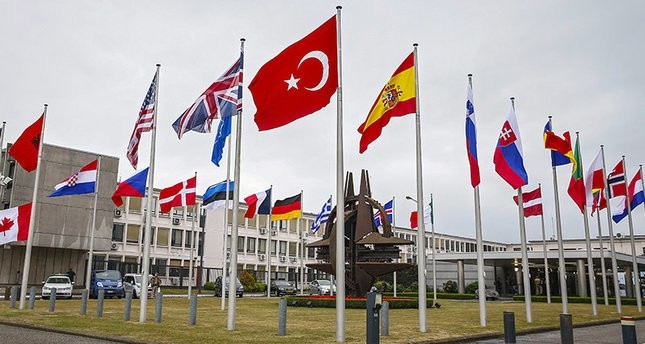 President Recep Tayyip Erdoğan will leave for Brussels Wednesday to attend the NATO leaders summit Thursday. He is expected to press for more support and cooperation from ally states in the fight against terror groups and also discuss the future of Turkey-EU ties with the leaders of the 27-member bloc on the sidelines of the summit.

Ankara will be present at the summit in Brussels for the inauguration of NATO's new building tomorrow, with a delegation led by President Erdoğan. According to presidential sources, the Turkish delegation will demand a strengthening of the role of NATO in sharing the burden of the fight against terror. "The international community is expected to exchange views on strengthening the role of NATO in the fight against terrorism during the meeting," a statement from the Presidential Office said.

President Erdoğan criticized NATO member states for lack of support for Turkey in the fight against Daesh and the PKK terrorist organization, which has been in conflict with Turkey for more than three decades. The president has, on several occasions, underlined that Turkey has seized caches of weapons from the PKK, which were traced back to Ankara's NATO allies, in addition to PKK sympathizers' activities across some European states.

Erdoğan is also expected to reiterate that there is no difference between the PKK terror group, listed as a terrorist organization by the U.S., EU and Turkey and its affiliates in Syria and Iran, the YPG and PJAK.

Erdoğan has conducted several international visits after Turkey's April 16 referendum, including the visit to Washington, where he met with U.S. President Donald Trump face-to-face for the first time last week. The president will be meeting Trump during the NATO summit for the second time in a month. During last week's visit to the U.S., President Erdoğan also voiced Turkey's concerns over U.S. support for the PKK's Syrian affiliate, the YPG.

Turkey, on numerous occasions, reiterated that the YPG's presence in northern Syria as an armed group constitutes a national security threat to Turkey and that Ankara will not allow the establishment of a terror corridor along its borders. The U.S. claims that it supports the Syrian Democratic Forces (SDF), despite the group being predominantly led by the YPG. In response, Turkey argues that the support given to the YPG in Syria is ultimately transferred to the PKK, and used against its citizens. The PKK is recognized as a terror group by both the U.S. and EU.

"Do you know that some of the weapons captured from the groups we declared as terrorist groups in Iraq and Syria are produced by our allies? And we know these weapons so well, and we even possess their serial numbers. However, when we inform them [the allies], they do not care. Some say they were provided during previous administrations. Others say we do not consider the PYD/YPG a terror group," Erdoğan had said during the NATO Parliamentary Assembly meeting in Istanbul in November.

The Turkish delegation will urge the ally states to support Turkey more in the fight against Daesh and strengthen involvement in finding a permanent political solution to the Syrian crisis.

NATO leaders will convene at a working dinner where the implementation of the previous Wales and Warsaw summits will be discussed. NATO-Russia relations, its rules of engagement in Afghanistan, NATO-EU cooperation and other global issues are also expected to be discussed among the member state leaders during the summit.

Erdoğan will meet with EU leaders

Ahead of the NATO meeting, Erdoğan is also scheduled to meet with EU Council President Donald Tusk and EU Commission President Jean-Claude Juncker, during which the Turkish president is expected to discuss the opening of the new chapters in Turkey's accession negotiations with the EU and also the migrant deal.

Earlier this month, Erdoğan told Brussels it had no other "option" than to open new "chapters," or policy areas, in Turkey's long-stalled accession talks which began in 2005.

So far, 16 policy chapters have been opened out of a total of 35 since the negotiations began, even though Ankara's bid to be a part of the bloc dates back to the 1960s.

Turkey-EU relations have also soured in recent years as Ankara accuses the bloc of turning a blind eye to terrorist groups, such as the PKK, the Revolutionary People's Liberation Party-Front (DHKP-C) and the Gülenist Terror Group (FETÖ). Meanwhile, Ankara also argues that EU states have been utilizing anti-Turkey rhetoric to gain an advantage in domestic politics.

The deal included a 6-billion-euro aid package to help Turkey care for the millions of refugees hosted in the country. Despite the promise made, Ankara has said that only about 700 million euros have been delivered. In addition, the promise of acceleration of Turkey's EU membership bid and visa-free travel for Turkish nationals within the Schengen area has also not been kept by the EU.

Following the victory on April 16, President Erdoğan made official visits in May to India, Russia, China and also the U.S. in an intense diplomatic schedule, where he has met world leaders.