Anastesiedes' negative attitude toward Cyprus talks due to domestic politics 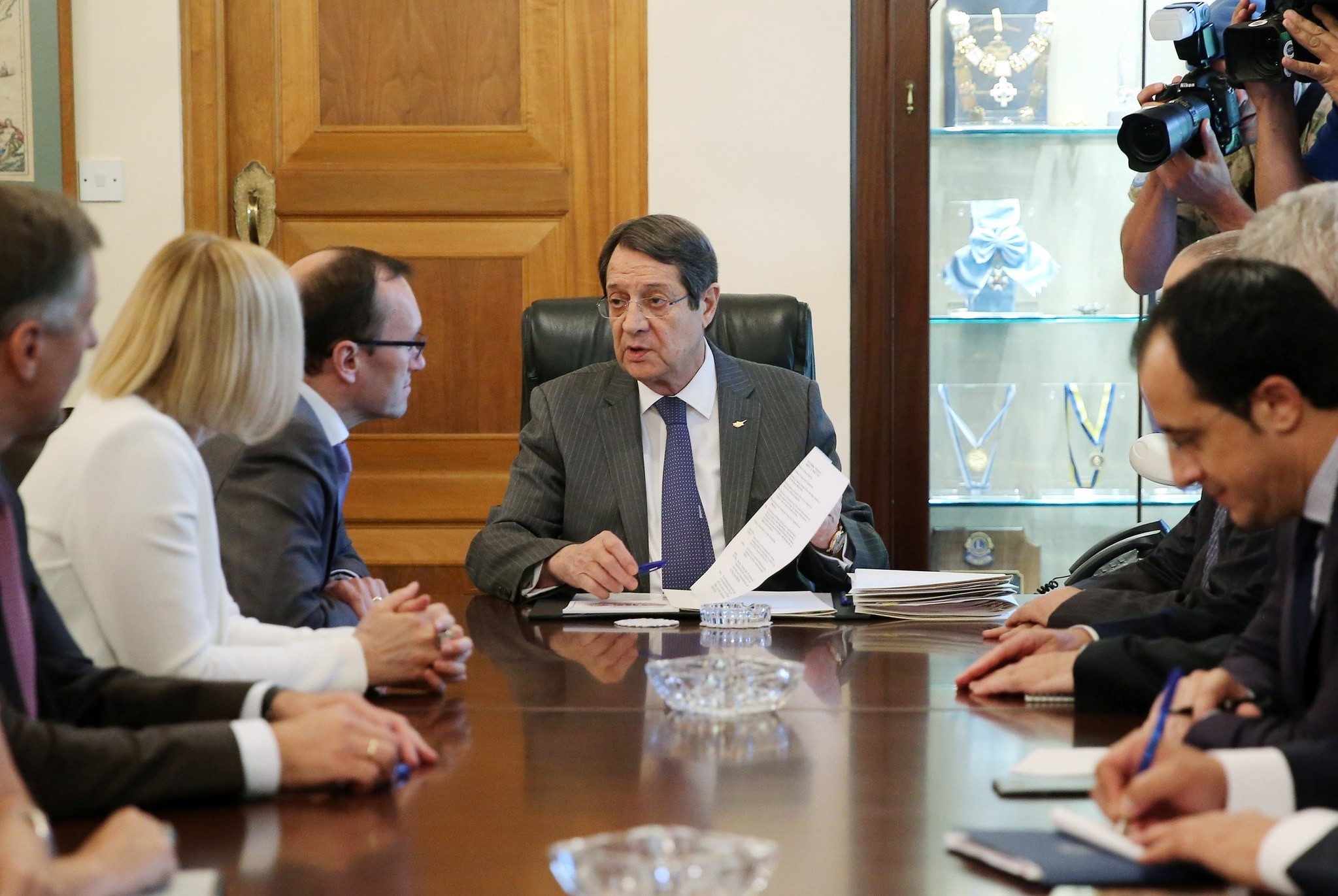 Greek Cypriot leader Nicos Anastasiades talks with Special Advisor to the UN Secretary-General on Cyprus, Espen Barth Eide, during their meeting at the Presidential Palace in Nicosia, Cyprus, 25 May 2017.
by Şeyma Nazlı Gürbüz Jun 02, 2017 12:00 am

Cyprus reunification talks continue with the Turkish side putting in all of its efforts to find a solution, despite the restive attitude of Anastasiades, who is insisting on preconditions

As Cyprus reunification talks continue despite a recent deadlock and without a permanent solution, experts argue that Greek Cypriot President Nicos Anastasiades is creating difficulties in the talks to not reach a solution due to Greek Cyprus's domestic policy concerns. In 2018, there will be a presidential election in the Greek side of Cyprus, and according to Cyprus Mail, in order for Anastasiades to win he needs to get the votes of far-right voters, which means he feels the necessity to turn into more of a patriotic leader than a leader who makes concessions to the other side.

Mehmet Uğur Ekinci, a foreign policy researcher at the Turkish Foundation for Political, Economic and Social Research (SETA), said moderate leaders like Anastasiades who approved the Annan Plan would not be elected president in Greek Cyprus. Yet, he was elected due to the economic crisis that the country was suffering at that time, which is losing its influence today. Therefore, Ekinci said, it is normal for Anastasiades to be worried about the upcoming elections. "I think he will stay neither too close, nor too far away from coming into terms," Ekinci added, expecting that Anastasiades would keep his distance from a possible solution.

Anastasiades's policy on the reunification talk is to not move on several internal issues before agreeing on guarantees and security, asserting preconditions. Yet many think that this is accepting failure in the reunification talks since it is known the Turkish Cypriot side will not budge on their demand for some form of guarantees and for the presence of Turkish troops on the island for a certain period of time.

Muzaffer Şenel, an academic at Istanbul Şehir University, said that since any achievement in the international arena is in Turkey's interest, it is normal for Greek Cyprus to stay away from a possible agreement. "The Greek side has a state at its hands and does not want to share it and any gain in the international arena will benefit Turkey, which is why the Greek side acts the way it does now."

Meanwhile, a recent poll found that eight out of 10 respondents think a solution will not be achieved in the near future. According to Cyprus Mail, the poll found that a majority of those who saw Anastasiades's address on the progress of settlement talks believe he has changed his stance due to the upcoming presidential elections. According to the survey conducted by IMR on behalf of Sigmalive, 53 percent of respondents said they were either not quite convinced or not convinced at all by the positions Anastasiades presented.

"There is still a zero-sum game going on in Cyprus, which means that the Greek side is expecting all the concessions from the Turkish side. This means that they expect the Turkish side to deny itself, and unless it denies itself, there won't be any agreement. Needless to say, this is impossible," Ekinci said, indicating that if international dynamics do not change in a way that will pressure both sides, it is hard to see a solution in near future.

The reunification talks, which have been taking place under the auspices of U.N. Special Envoy for Cyprus Espen Barth Eide, were launched in May 2015 to discuss a permanent settlement for the divided Mediterranean island.

At the request of Greek Cypriot President Anastasiades and Turkish Cypriot President Mustafa Akıncı, Eide spent several days shuttling between the two sides in an attempt to agree on the framework for a second international conference in Geneva.

However, on May 26, Eide announced that there was no reason to continue since there was "no prospect" for agreement on the summit's details.

Şenel also agreed with Ekinci concerning the necessity of an alteration in the attitude of the international platform. Claiming that Turkey gained a psychological and operational advantage against Greek Cyprus during the Annan Plan, Şenel said that it failed in turning these gains into a diplomatic success.

"Both Anastasiades and Akıncı were one of the most moderate candidates of each side. Yet, despite the fact that they have been talking for 20 months now and there are no particular issues that they do not agree on, there is still no prospect for a solution. Unless international public opinion changes and pressures both sides, I don't think that there would be a positive change in reunification talks," Şenel indicated.

TURKEY, TURKISH CYPRUS READY FOR GENEVA WITHOUT ANY PRECONDITIONS

However, on Wednesday, Eide said Cyprus reunification talks have not failed yet, stating that no meeting was scheduled for the near future although the parties were constantly in touch.

Akıncı said the negotiations, which have been going on for 50 years now, must reach a solution and Turkish Cyprus has put all their efforts into this.

He also accused Greek Cyprus of not allowing any success in the process.

"It is impossible to continue negotiations with preconditions. The attitude that has emerged during the talks, prevents the process from reaching success. We are ready to talk on every issue. This is the position of our government, opposition and Turkey. The Greek side's attitudes on preconditions are against the 2014 agreement and also the Geneva declaration. It is not a solution-centered attitude."

He also added Turkish Cyprus is ready to go to Geneva without any preconditions.

"We are going to meet in New York on June 4. I hope that our positive attitude will be reflected by the Greek side as well."

Çavuşoğlu also said that Turkey will join the Turkish Cypriot delegation in Geneva without any preconditions.

"The Turkish [Cypriot] side and Turkey is ready to go Geneva without any preconditions. There is also a consensus on the process among Turkish Cypriot political parties, the Turkish Cypriot government and Turkey. There is a need to go to Geneva, and if a solution is not reached, a decision must be made there, "Çavuşoğlu said.

"Greek Cyprus's plan to continue hydrocarbon activities will raise tensions and affect the negotiations. They should not turn a blind eye to our rights in the open seas of the island and give up on taking steps that could increase tensions," Çavuşoğlu added.

Cyprus was divided into a Turkish Cypriot statelet in the north and Greek Cyprus in the south after an Enosis-inspired 1974 military coup was followed by violence against the island's Turkish population. Turkey intervened as a guarantor power and the status of the island remains unresolved in spite of a series of discussions that resumed in May 2015.

The leaders met several times in Geneva last year, but their last meeting in February was wracked by controversy over a Greek Cypriot decision to introduce a commemoration of the 1950 Enosis referendum on unification with Greece.