Turkey will not allow a terror corridor in Syria, Erdoğan says 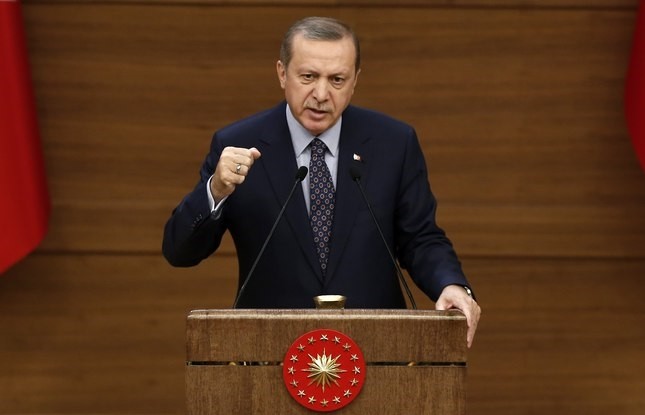 President Recep Tayyip Erdoğan said in an iftar dinner late Tuesday that Turkey will not allow PYD terrorists to form a corridor in Northern Syria.

"We will not allow a terror corridor in Northern Syria or PKK activities in Iraq," Erdoğan said, adressing ambassadors in an iftar (fast-breaking) gathering in ruling Justice and Development Party's (AK Party) headquarters in Ankara.

The umbrella organization Syrian Democratic Forces (SDF) and its biggest part PYD and its armed wing YPG terrorists control a swathe of northeastern Syria from the Iraqi border to the city of Manbij on the western banks of the Euphrates. The PYD militants aim to connect the Azez and Manbij pockets in order to form a corridor, but Turkey's Operation Euphrates Shield launched last year against Daesh terrorists also prevented them from creating that terror corridor.

Speaking to the top diplomats in the dinner organized by his party, Erdoğan also added that Turkey has neutralized over 3.000 Daesh terrorists.

"In order to eradicate Daesh terror, another terrorist group was employed. This approach is bound to fail," he said, implying the US support for PYD terrorists in the anti-terror campaign against Daesh.

The PYD terrorists launched an offensive against Daesh earlier on the same day, raising Turkish concerns. Turkey expressed its reservations regarding the operation earlier in the same day, with Prime Minister Yıldırım saying that Turkey will "give the appropriate reply immediately," should any threat stemming from PYD activities near Turkish border occur.