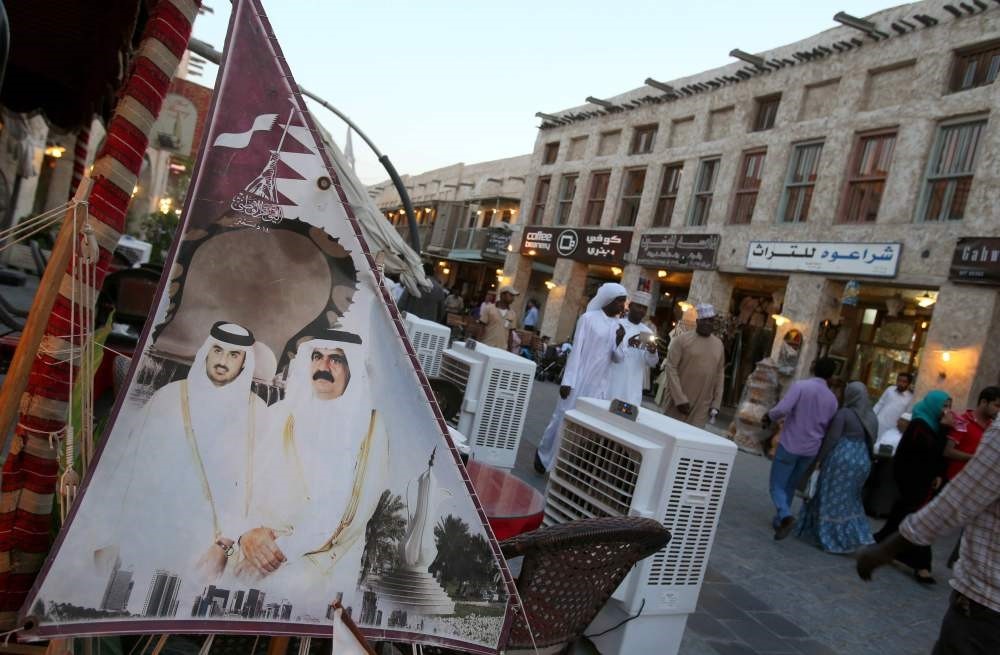 Ankara is speeding up diplomatic efforts to mediate between Qatar and Gulf countries to find a solution through dialogue and calm, as it is aware of the need for stability in the region amid the deadly conflicts in Syria, Iraq and Yemen

Ankara exerted efforts to weather the storm after several Gulf countries severed ties with Qatar and imposed sanctions on the Arabian Peninsula country as President Recep Tayyip Erdoğan carried out phone diplomacy with leaders from Qatar, Saudi Arabia, Kuwait and Russia Monday night. Government spokesman and Deputy Prime Minister Numan Kurtulmuş, said late on Monday that Erdoğan contacted many heads of state and government from the Gulf region and the West in an effort to actively take part in the search for a peaceful solution to the crisis.

"The president has been actively involved in the process to solve the problem by holding phone conversations with many heads of state and government, some of which are Islamic countries and some Western countries," Kurtulmuş said. Aware of the need to maintain stability in the region amid deadly conflicts in Syria, Iraq and Yemen, Ankara has promptly turned to diplomatic channels as Erdoğan called Qatari Emir Sheikh Tamim bin Hamad al-Thani, Russian President Vladimir Putin, Kuwaiti Emir Sheikh Sabah al-Ahmed al-Sabah and Saudi Arabia's King Salman bin Abdulaziz on Monday.

Commenting on Ankara's intention to de-escalate the tension, Abdullah Alshimarry of the Riyadh-based Diplomatic Studies Center said that Ankara's willingness to mediate in the crisis is understandable.

The strife in the Gulf region dominated the agenda of Turkish political parties yesterday as well. Prime Minister Binali Yıldırım had his say regarding the matter at the Justice and Development Party's (AK Party) weekly parliamentary group meeting.

Emphasizing that Turkey is saddened by the incident, Yıldırım said Ankara hopes that the countries create a solution through dialogue and calm. "The Turkish government is continuing its work at every level," he added.

On the other side, opposition Nationalist Movement Party (MHP) Chairman Devlet Bahçeli expressed backing for Ankara's efforts to ease the tension in the region. Praising Turkey's advice to all sides to sort out their differences through dialogue, Bahçeli said: "It is beneficial that our country steps in to contribute to solving the deadlock in the crisis as the term president of the Organization of Islamic Cooperation."

Abdulhamit Qutb from the Al-Sharq newspaper said that Ankara may persuade Riyadh to revise its approach toward Qatar. Stressing that Ankara and Doha are strategic partners and that Turkey has strong military and economic cooperation with Saudi Arabia, Qutb argued that "Turkey can utilize this leverage and influence Saudi Arabia to revise its pressure on Qatar."

At the beginning of the week, the decision by Saudi Arabia, Egypt, Bahrain, Yemen and Libya to freeze all diplomatic ties with Qatar stunned the world, sparking another crisis in the already conflict-ridden region.

Instead of taking a rushed step in the face of such a wide-ranging protest from several countries, Doha has opted to give mediating efforts a chance. Qatari Foreign Minister Sheikh Mohammed bin Abdulrahman al-Thani said his country was ready for mediation.

Thani signaled that Doha is willing to put faith in Kuwait's Sheikh Sabah in "proceeding and communicating with the parties to the crisis and to try to contain the issue."

Kuwait reportedly offered help in sorting out the issue as Sabah spoke with the Qatari emir, according to state-run Kuwait news agency. Sabah's offer for mediation came after a senior Saudi royal arrived in Kuwait with a message from King Salman.

Alshimarry said that Doha may hold talks with Riyadh with a Kuwaiti mediator. "Qatar as a member of the GCC, can communicate with Saudi Arabia with the Kuwaiti emir as a mediator and Qatar knows what is needed from him," he said.

The Gulf countries that have severed ties with Qatar accuse the small country of backing extremists and forging close ties with Iran, which is interpreted as the most likely reasons behind the wide-ranging bans and sanctions.

U.S. President Trump elaborated on the crisis for the first time on his personal Twitter account, hinting at the reason why Qatar has been abruptly targeted. "During my recent trip to the Middle East I stated that there can no longer be funding of Radical Ideology. Leaders pointed to Qatar - look!" he tweeted.

Trump also sent two separate tweets, saying: "So good to see the Saudi Arabia visit with the King and 50 countries already paying off. They said they would take a hard line on funding..."

"...extremism, and all reference was pointing to Qatar. Perhaps this will be the beginning of the end to the horror of terrorism!"

The repercussions of cutting ties have been canceling flights to and from Qatar, shutting down border gates, freezing the activities of banks operating in Qatar and calling on all citizens and ambassadors to leave the country as soon as possible.

Saudi, Emirati and Bahraini citizens have been prohibited from traveling to Qatar. Those who are already in the country and have been residing in it were given 14 days to leave. Qataris have been affected by the diplomatic crisis as well. All Qatari citizens in the aforementioned countries must leave within a fortnight.

Qatar, one of the richest countries in the world, has seen its stock market plunge and its currency fall against the dollar on Monday following the announcement of diplomatic and economic sanctions. The country is also the biggest supplier of liquefied natural gas (LNG). * Contributed by Amer Solyman from Istanbul