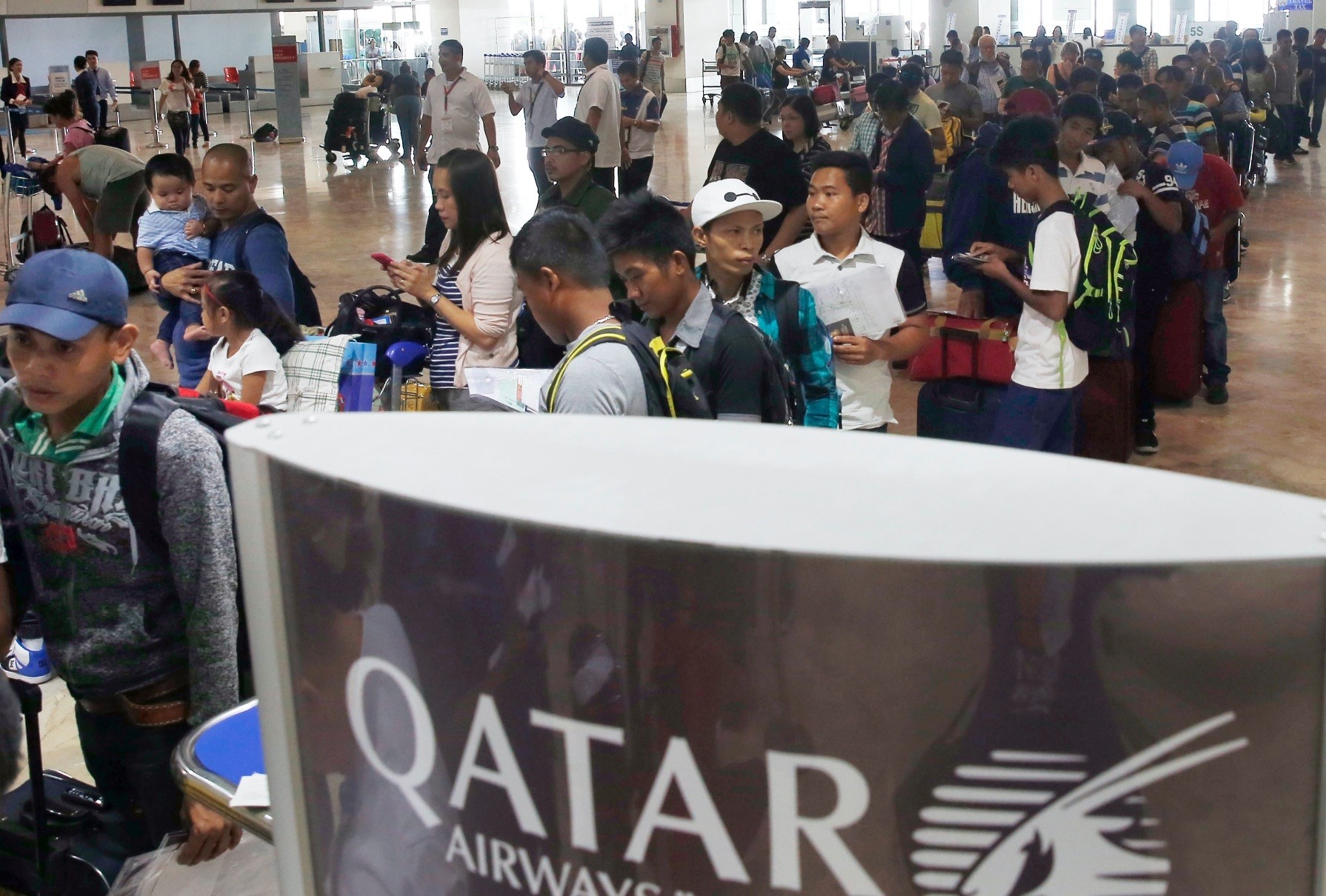 Despite a temporary suspension of the deployment of Filipino workers to Qatar by the Labor Department on Tuesday,
by Şeyma Nazlı Gürbüz Jun 08, 2017 12:00 am

The gulf crisis is continuing to deepen as new countries climb onto the bandwagon to freeze diplomatic ties with Qatar and the sanctions are beginning to show their negative effects across the country. At an iftar (fast-breaking) gathering on Tuesday, President Recep Tayyip Erdoğan stated that Turkey disapproves of the sanctions against Qatar, adding that the incident took place at a time when the region needs cooperation and solidarity more than ever.

"This incident, which took place at a time when we need solidarity and cooperation the most, does not benefit any of the countries within the region. It would be best for members of the Gulf Cooperation Community to solve their own problems via mutual dialogue. In this regard, we respect the calm and constructive attitude of Qatar. The isolation of Qatar, which we know firsthand, is fighting actively against terrorist organizations, will not be beneficial in solving any problems," President Erdoğan said, adding that Turkey will pursue its relationship with Qatar and is prepared to do anything it can to solve the crisis.

Speaking to Daily Sabah, Zekeriya Kurşun, the head of the history department at Fatih Sultan Mehmet Vakıf University, said the problem should be approached with a delicate diplomacy from a humanitarian perspective.

"As a matter of fact, Turkey is the only country within the region that has the ability to conduct a dialogue between the regional powers and Qatar and Iran, who are the target boards. Turkey must use this advantage," he added.

Speaking about the main reason for the crisis, the research director of the Istanbul-based al-Sharq Forum, Galip Dalay, said, "I believe the showdown of the struggle over the Arab Spring is still continuing," stating that Qatar has a different policy than other Gulf States who followed the steps of Saudi Arabia.

"The aim of the Saudis is to first discipline Qatar and then to take the country under its custody. They aim to form a malleable Qatar," Dalay added.

The crises started at the beginning of the week with the decision by Saudi Arabia, Egypt, Bahrain, Yemen and Libya to freeze all diplomatic ties with Qatar, stunning the world.

Two weeks before the crisis, Saudi Arabia, the United Arab Emirates (UAE), Bahrain and Egypt blocked Qatari media outlets, including Al Jazeera due to the alleged comments of Qatari Emir Hamad al-Thani who hailed Iran as an "Islamic power" while criticizing U.S. President Donald Trump over his policy on Tehran.

Zekeriya Kurşun also stated that the situation was apparently due to the recent policies implemented by Qatar, in his article titled, "Why is Qatar on the Target Board?"

"It was obvious that Qatar will be declared the rebellious boy of the region since it opened its doors to Hamas and Ikhwan, demanded freedom for Morsi and established close relations with Turkey," Kurşun stated.

"One of the main reasons behind the crises is the eradication of the problems between Saudi Arabia and the U.S. and also the desire to have strong U.S. support against Iran. The road to crises did not emerge after Trump's visit as thought by most, but it was planned during the greeting visits of Gulf representatives to the U.S. following Trump's election [as president]," Kurşun further told Daily Sabah, stating that while Gulf countries except Qatar got their support against Iran, Trump got 400 million worth of gain which created an important advantage for him against his domestic opponents.

Although Qatar said that the comments were the result of a hacking incident, countries maintained their blockage of Qatari media outlets. U.S. Federal Bureau of Investigation agents indicated on Tuesday that they believe Russian hackers were the main culprit in the incident. Still, the Saudi foreign minister said on Wednesday that the Kingdom is not aware of any outcome regarding the FBI investigation into the hacking of Qatar.

Gulf countries that have severed ties with Qatar accuse the small country of backing extremists and forging close ties with Iran, which is interpreted as the most likely reasons behind the wide-ranging bans and sanctions.

Meanwhile, Jordan and Mauretania also froze diplomatic ties with Qatar. The Philippines, which currently has more than 270,000 citizens living in Qatar, also temporarily banned its workers from travelling to Qatar on Tuesday, due to possible problems such as food shortages that could affect tens of thousands of Filipinos in Qatar, should the crisis worsen.

Instead of taking a rushed step in the face of such a wide-ranging protest from several countries, Doha has opted to give mediating efforts a chance. Qatari Foreign Minister Sheikh Mohammed bin Abdulrahman al-Thani said his country was ready for mediation.

Speaking to CNN International on Tuesday, the Qatari Foreign Ministry indicated their readiness for mediation as Abdulrahman al-Thani said that they would like to "sit down and talk" while expressing his county's willingness to solve the crisis.

"We are not a superpower here, we do not believe in solving things with confrontation," Abdulrahman al-Thani said.

Qatar's minister also signaled that Doha is willing to put faith in Kuwait's Sheikh Sabah in "proceeding and communicating with the parties involved in the crisis and to try to contain the issue."

Kuwait reportedly offered help in sorting out the issue as Sabah spoke with the Qatari emir, according to state-run Kuwait news agency. Sabah's offer for mediation came after a senior Saudi royal arrived in Kuwait with a message from Saudi King Salman.

Following the offer for assistance, Kuwait's emir paid a short visit to Saudi Arabia on Tuesday where he held talks with Saudi King Salman on ways to defuse the escalating crisis between Arab countries and Qatar. Yet, no details were given on the talks.

"The main question here is whether or not Qatar will change its policies due to these sanctions. If it does, I believe this would not bode well for relations with Turkey. However, I don't think Qatar would make such a radical change if its regional and international allies continue to support [the country]," Dalay said, stressing that this is not a crisis that only affects Qatar but also the entire region.

U.S. President Trump elaborated on the crisis for the first time on his personal Twitter account, hinting at the reason Qatar has been abruptly targeted.

"During my recent trip to the Middle East I stated that there can no longer be funding of radical ideology. Leaders pointed to Qatar – look," he tweeted.

Trump also sent two separate tweets, saying, "So good to see the Saudi Arabia visit with the King and 50 countries already paying off. They said they would take a hard line on funding. ..." and, ". ...Extremism, and all reference was pointing to Qatar. Perhaps this will be the beginning of the end to the horror of terrorism!"

Yet, Pentagon officials made a quick statement following Trump's tweets with spokesman Capt. Jeff Davis telling reporters Tuesday that the U.S. is "grateful to the Qataris for their longstanding support for our presence and their enduring commitment to regional security."

Meanwhile, the White House also made statements regarding the issue, insisting that the Trump administration remains committed to cooperation among Arab allies in the Middle East.

"The U.S. continues to be in close communication with all parties to resolve the issues and restore cooperation, which is so important to regional security," said White House spokesman Sean Spicer on Tuesday.

"I think what we're witnessing is a growing list of irritants in the region that have been there for some time, and obviously they have now bubbled up to the level that countries have decided they need to take action in an effort to have those differences addressed," U.S. Secretary of State Rex Tillerson also said on the issue, adding that the U.S. encourages parties to sit down together and address these differences.

"U.S. President Trump's recent mega military contracts with Gulf monarchies raise the risk of a new spiral in arms sales," Gabriel warned in an interview with the Handelsblatt daily to appear on Wednesday, adding that he finds this policy completely wrong and contrary to Germany's stance.

Trump spoke by phone with Saudi King Salman on Tuesday and stressed the need for Gulf unity, a senior White House official said.

The repercussions of cutting ties include the cancellation of flights to and from Qatar, shutting down border gates, freezing operations of bank activities in Qatar and calling on all citizens and ambassadors to leave the country as soon as possible. Due to the cancellations of flights, Qatar had to change its travel routes and started to use Turkish and Iranian air space.

Saudi, Emirati and Bahraini citizens have been prohibited from traveling to Qatar. Those who are already in the country and have been residing there were given 14 days to leave. Qataris have been affected by the diplomatic crisis as well. All Qatari citizens in the aforementioned countries must leave within a fortnight.

Meanwhile, the UAE's justice ministry also warned social media users that they could face prison time and fines for offering sympathy to Qatar amid a growing diplomatic crisis in the Middle East.

"Qatar's willingness to keep the doors open for dialogue signifies that he may accept some conditions. In order to reach consensus, this option is reasonable," said Kurşun. "Yet," he added, "[even if Qatar accepts these conditions], the main problem would continue to remain. Since the main problem is Iran, Qatar would be used for irritating Iran. This means that even if the tension decreases immediately, the problem would still remain. "

TURKEY TO SUPPLY FOOD TO QATAR AMID GULF ROW

a government official said on Wednesday that Qatar is talking to Turkey and Iran about securing food and water supplies to stave off possible shortages due to the crisis.

"We are in talks with Turkey and Iran and other countries," said the official, who spoke on condition of anonymity due to the sensitivity of the subject, adding that the supplies would be brought in via Qatar Airways cargo flights.

The official said there were enough grain supplies in the market in Qatar to last four weeks and that the government also had large strategic food reserves in Doha.

Following the official's statement, Mehmet Büyükekşi, chairman of the Turkish Exporters Assembly (TİM), told reporters on Wednesday that exporters stood ready to fill the gap after the UAE and Saudi Arabia cut trade ties with Qatar.