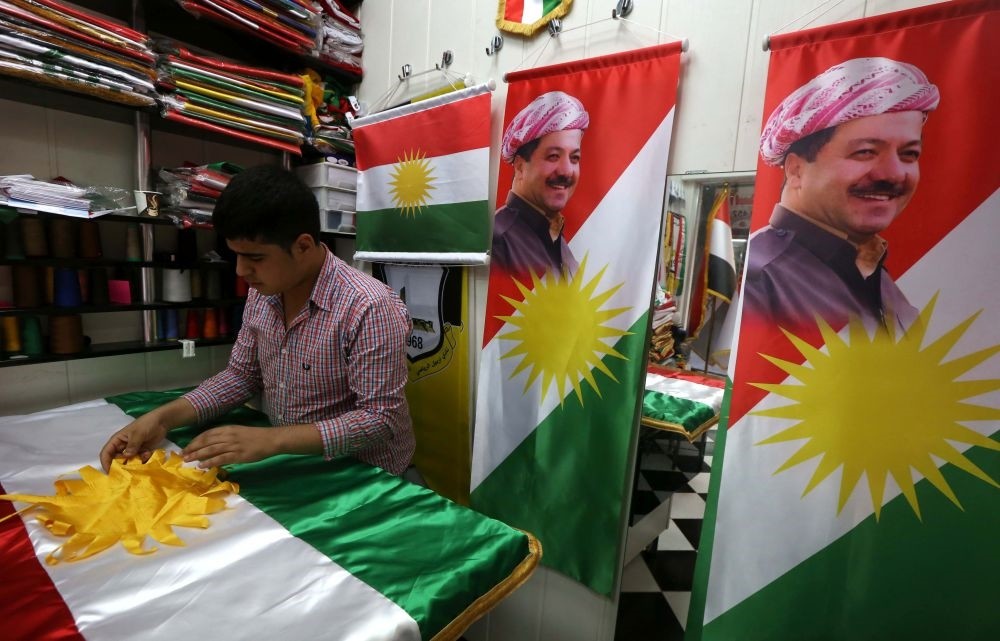 Iraq's autonomous Kurdish region will hold a referendum on statehood in September, despite opposition from Baghdad.
by Yunus Paksoy Jun 09, 2017 12:00 am

The Kurdish Regional Government's decision to hold an independence referendum in September, despite Baghdad's opposition, is expected to stir tensions in the region and could cause a row, particularly with its northern neighbor, Turkey

The announcement made by the Kurdistan Regional Government (KRG) that the semi-autonomous region will hold an independence referendum on Sept. 25, including a separate vote on several disputed areas, is highly likely to heat up the crisis-stricken region and draw ire from Ankara, experts say. "I am pleased to announce that the date for the independence referendum has been set for Monday, September 25, 2017," said KRG President Masoud Barzani on Wednesday via his official Twitter account after a meeting of Kurdish political parties under his chairmanship.

While the Iraqi central government has been battling hard to take back Mosul from Daesh militants since October and the Turkish government opposing the presence of the PKK terrorist organization in Iraq's Sinjar, the KRG's move to hold a widely debated independence referendum has every potential to turn the region into a hotbed of unrest."Kirkuk's annexation is certainly unacceptable for Turkey," Can Acun, a Middle East expert for the Ankara-based think tank Foundation for Political, Economic and Social Research (SETA), said.

Stressing that the KRG has been trying to exploit the process after the U.S. invasion of Iraq by annexing Kirkuk, Acun said that such a move would form an environment susceptible to clashes.

He added that Turkmens are as significant as Kurds and Arabs in the region, and that annexing Kirkuk would not contribute to regional stability.

"The KRG should act in a more rational way and discuss the matter with actors," he said.

Meanwhile, a senior official from Barzani's Kurdistan Democratic Party (KDP), Group deputy chairman Tariq Gerdi, told Daily Sabah that, "The referendum is a good step for going to the people and asking their opinion regarding whether they would prefer to be with the Iraqi federal government or if they want liberation and an independent Kurdish state."

Ankara has already expressed concerns about the referendum. Turkey's presidential spokesman İbrahim Kalın said in late March that such a move would be "wrong," stressing that Turkey "disapproves bringing up such a matter especially in times when regional security risks are at their highest."

Kirkuk, one of the disputed areas, according to the Iraqi constitution, between the Iraqi central government and the KRG, which will be up for vote in the upcoming referendum, troubles the Turkish government. Ankara is not willing to let the Turkmen-populated city be annexed by the KRG.

The Turkish Foreign Ministry previously expressed its frustration and concerns about the decision to hold a referendum about the future of Kirkuk, noting that unilateral steps regarding the status of the city will damage dialogue between those representing different ethnic and religious groups, as well as breach the country's constitution.

The KDP's Gerdi defended the referendum decision, telling the paper that it is the KRG's international right.

"This is a legal and legitimate right guaranteed by International Charter of the U.N.," Gerdi said, adding that it is "an expression of self-determination in a fully democratic way."

Hemin Hawrami, a senior assistant to President Barzani, tweeted on Wednesday saying, "Referendum [on Sept. 25, 2017] is for Iraqi Kurdistan including Kirkuk, Khanqin, Sinjar & Makhmor. The question is: Do you want an independent Kurdistan?"

The referendum has been on the horizon for a long time.

"The KRG has been run like an independent country for a while. The only thing that has represented the Iraqi central government was the flag in Barzani's room," said Çetiner Çetin, an Ankara-based journalist for the Türkiye daily which mainly focuses on developments in the region.

There have already been tensions recently regarding the KRG's actions reminiscent of an independent state acting on its own. The KRG raised its flag on state buildings in Kirkuk, sparking a crisis with Turkey and the Iraqi central government.

"The KRG was administrated as a federal state. The KRG and the Baghdad government operate on two separate soils with two different flags. Baghdad had no police officers, troops or public servants in KRG-held areas," Çetin said.

The KRG's possible independence has the potential to disturb the PKK to a great extent. Already calling the KDP terrorists, the PKK will find itself in a tough spot as it follows a policy of an independent state in northern Syria. Çetin contended that a war between the PKK and the KRG may be inevitable in the region in the wake of the independence referendum, which would be instigated by Iran.

"If the PKK successfully forms an independent state in northern Syria, Syrian Kurds and Iraqi Kurds would wage a war against one another," he claimed.

The PKK and the Peshmerga have clashed more often than not in the region. The PKK and the KRG's clashes in Iraq are interpreted by many as a struggle for influence. KRG spokesperson Sefin Dizayi said last month that the semi-autonomous government was ready to take action if threats made by higher-ups in the PKK to move the war to the KRG region continue.

"The KRG does not accept any PKK activity in KRG-governed or surrounding regions," Dizayi warned.