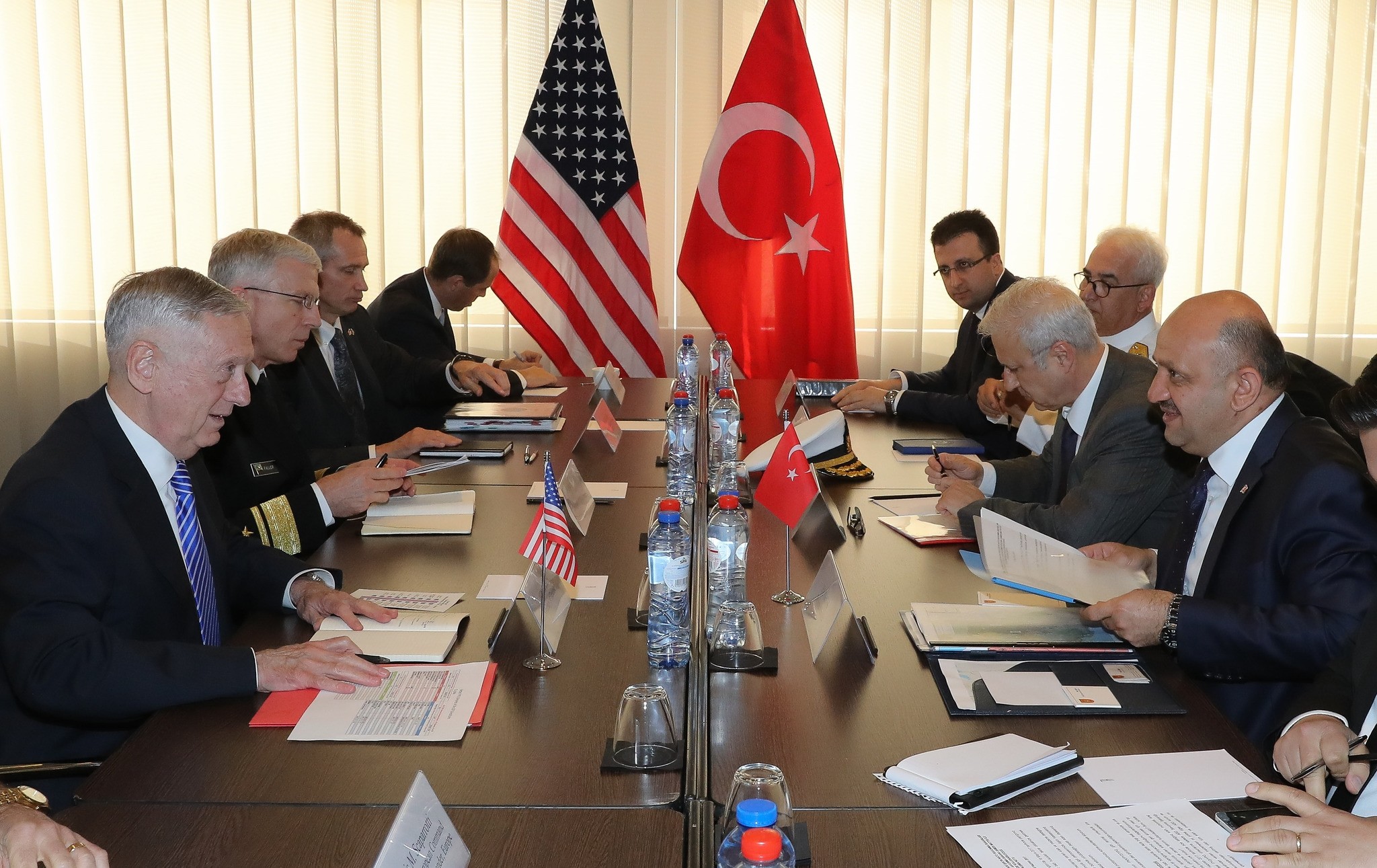 Defense Minister Fikri Iu015fu0131k held a closed-door meeting with U.S. Secretary of Defense James Mattis prior to the NATO Defense Ministers Meeting in Brussels. (AA Photo)
by Daily Sabah with Agencies Jun 28, 2017 12:00 am

The Turkish military is about to launch an operation on Afrin to take the city from the YPG as the U.S. sticks to its statements saying its support for YPG is an essential although not preferred

Ankara has been increasing pressure on the Democratic Union Party's (PYD) People's Protection Units (YPG) militia in Syria's northern city of Afrin after U.S. Secretary of Defense James Mattis told Defense Minister Fikri Işık in a meeting in Brussels on Wednesday that their cooperation with the YPG is a temporary necessity.

Mattis called arming the YPG "an interim situation triggered by necessity rather than preference," said a source, who asked not to be named due to restrictions on speaking to the media. Işık raised Ankara's concerns over U.S. support to the YPG in Syria in the meeting with Mattis and also discussed Mattis' recent letter to Turkey regarding arming the YPG to fight Daesh as well as the U.S.'s pledge to take back the weapons once their joint operations are over, the source added.

On Tuesday, Mattis said that the U.S. will continue to provide weapons to the YPG after concluding the battle against Daesh in northern Syria's Raqqa province. Meanwhile, the Turkish military is expected to launch an operation near the Turkish border town of Kilis to take PYD-held Afrin, Tell Rifaat and Minnigh Military Airport in a move that Ankara has insinuated for a while. Ankara has long warned the PYD against remaining along the Turkish-Syrian border, saying that it would not allow the formation of a "terrorist state" along its borders in northern Syria.

Speaking just across the border last Friday, President Recep Tayyip Erdoğan stated Turkey's case against the PYD clearer than ever, saying: "Despite who is by your side [U.S. coalition], you shall know that Turkey, with its armed forces, will not let a state be formed in northern Syria."

The YPG is trying to combine its self-declared Afrin canton in the northwest corner of Syria with the Kobani and Jazeera cantons in the northeast, but Turkish and Syrian opposition groups fighting for the unity of Syria have been trying to prevent this.

Deputy Prime Minister Numan Kurtulmuş said yesterday that Turkey will retaliate against any cross-border gunfire from the YPG in Syria and will not remain silent in the face of anti-Turkey activities by terrorist organizations abroad. He also added that Turkey does not approve of the U.S. arming the YPG and that itis the result of indecision rather than necessity.

Meanwhile, according to Turkish Milliyet Daily, Ankara and Moscow negotiated for 9 times in last 12 days and took important steps in withdrawal of Russian forces from Afrin. It is expected for the Russian forces to clarify which direction the withdrawal will take place in, the daily stated.

Many terrorists are known to come to Turkey illegally from Kobani, a town just across the border in northern Syria, or from other northern Syria cities. On Tuesday, police arrested four PKK terrorists in the southeastern province of Şanlıurfa, who came to Suruç illegallyfrom Kobani. In December of last year, it emerged that a terrorist who killed 14 soldiers in central Kayseri province had received training at PYD camps in Kobani and had traveled to Turkey illegally through Suruç. Investigations into the attacks carried out in Ankara in February and March 2016 also pointed to the involvement of YPG-trained militants and the use of explosives brought from northern Syria. The attacks claimed the lives of 67 people and injured nearly 200 people, mostly civilians.

Pentagon chief spokeswoman Dana W. White provided a readout later on Wednesday. "The secretary reaffirmed support for Turkey in its fight against the PKK and plan to increase cooperation on Turkey's counter-PKK efforts. The secretary and minister also discussed the crisis in Syria and agreed to continue cooperation to end the scourge of violence and alleviate human suffering there. Both leaders affirmed their support for peace and stability in both Iraq and Syria, and look forward to continuing to work together on the U.S.-Turkey security alliance," White said in the readout.

Meanwhile, the U.S.-backed Syrian Democratic Forces (SDF) warned of the prospect of fierce confrontation with the Turkish army in northwestern Syria if it attacks SDF areas, Reuters reported yesterday.

Naser Haj Mansour, a senior SDF official, was quoted by Reuters saying that the SDF had taken a decision to confront Turkish forces "if they try to go beyond the known lines" in the areas near Aleppo where the sides exchanged fire earlier in the week. "Certainly there is a big possibility of open and fierce confrontations in this area, particularly given that the SDF is equipped and prepared," Mansour was quoted as saying by Reuters.

Turkey considers the PYD and the YPG to be affiliates of the PKK, a proscribed terrorist organization according to the U.S., Turkey and the EU. The U.S. and the EU do not share Ankara's concerns regarding the YPG. Continuous U.S. support for the YPG has caused tensions in relations between Washington and Ankara while the former says that supporting the YPG is the only option to defeat Daesh and the latter says an alternative could be found with local Arab tribes, backed by countries in the region, rather than supporting and arming "a terrorist group".