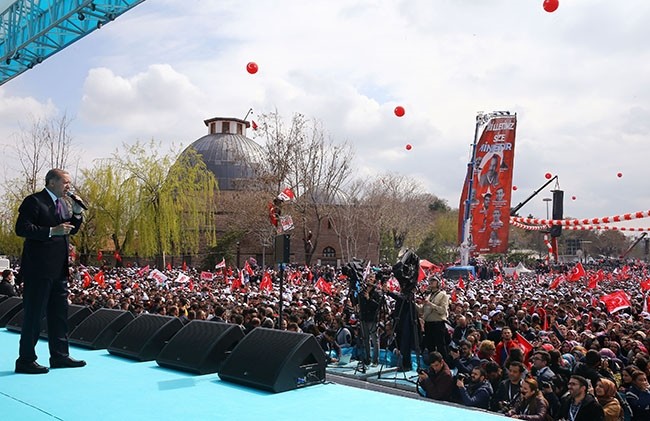 Germany will reject a request by President Tayyip Erdoğan to address Turkish citizens while attending the G20 summit in Germany next week, the German Foreign Minister Sigmar Gabriel said Thursday.

According to Gabriel, Ankara had submitted a formal request Wednesday for Erdoğan to speak to Turkish citizens living in Germany on the sidelines of the July 7-8 summit of leading economies.

A spokesman for German Chancellor Angela Merkel confirmed that Erdoğan's request to speak at a non-G20 event would be denied.

Gabriel said such appearances by Erdoğan would be "inappropriate,"citing also security concerns for his request being rejected.

"We don't have the police forces available to ensure security, given the G20." Gabriel said. "But I also told them openly that such an appearance was not appropriate given the conflict situation that exists with Turkey, and that it would not fit into the political landscape at this time."

"The approach of someone who held the position of the Presidency of the European Parliament towards imposing restrictions on freedom of assembly and expression once again reflects the true face of the mentality that we confront as well as the double standard of those who aim to lecture the others," the ministry said, referring to former European Parliament President Martin Schulz, who claimed that Europe must become stronger in response to a weakening of democracy elsewhere while pointing out Erdoğan, Russian President Vladimir Putin and U.S. President Donald Trump.

"We strongly condemn and refuse this person's unacceptable remarks targeting our President," the statement said.

Erdoğan has previously been permitted to address 1.4 million Turkish citizens living in Germany and around 3 million people with a Turkish background. But Gabriel said he wanted to change that policy for all non-EU countries, given the experiences of the last months, and had discussed the issue with Merkel.

In Moscow, Gabriel told reporters that Germany was under no obligation to allow such appearances and it did not violate democratic principles.

Since 2015, Germany has stationed around 260 troops, six high-tech Tornado surveillance jets and a tanker aircraft at Incirlik Air Base. German government June 7 approved a plan to remove its troop reconnaissance aircraft from Incirlik and relocate it to an air base in Jordan.