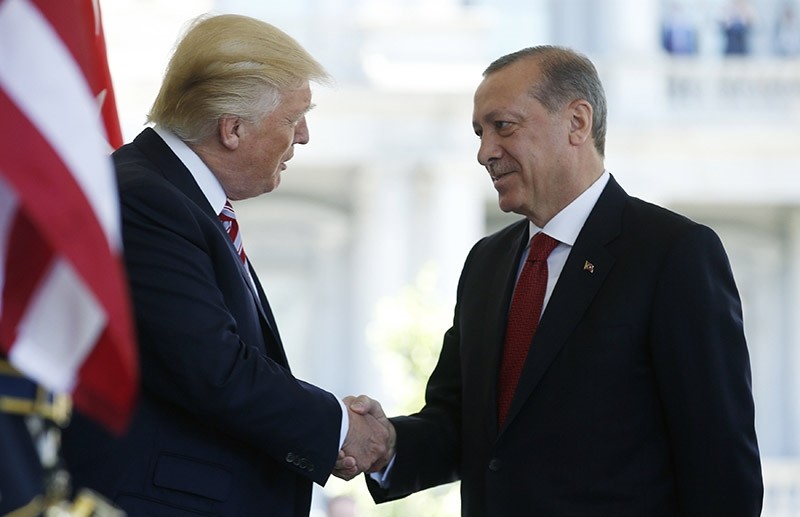 President Recep Tayyip Erdoğan called U.S. President Donald Trump on Friday and discussed the dispute between Qatar and Gulf and Arab powers who severed diplomatic and travel links with Qatar as well as the latest situation and presence of PKK-linked People Protection Units' (YPG) in northern Syria's Afrin province.

The two leaders talked about "numerous subjects, including ways to resolve the ongoing dispute between Qatar and its Gulf and Arab neighbors while ensuring that all countries work to stop terrorist funding and to combat extremist ideology.", the White House statement said.

The Turkish presidency also released a statement about the details of the phone call and said President Erdoğan expressed the importance of fighting against all terror groups including Daesh, YPG and the Gülenist Terror Group (FETÖ).

The phone call came amid Turkey's alleged preparation to launch a military operation on YPG-held Afrin province. YPG took the region from Daesh last year, including Arab-populated towns of the region including Tal Rifaat and Minnigh.

Speculations on Russia's withdrawal from Afrin strengthen the possibility of Turkey's second cross-border operation after Operation Euphrates Shield. The Afrin offensive is expected to be similar to Euphrates Shield, which was launched on August 24, 2016, and concluded late in March. The operation successfully liberated Jarablus, Dabiq and al-Bab from Daesh.

Continuous U.S. support for the YPG has caused tensions in relations between Washington and Ankara while the former says that supporting the YPG is the only option to defeat Daesh and the latter says an alternative could be found with local Arab tribes, backed by countries in the region, rather than supporting and arming "a terrorist group".

Erdoğan and Trump last met in May 16, when Erdoğan and a Turkish delegation visited Washington.

During the meeting, Erdoğan and Trump mainly discussed the U.S. decision to directly arm the YPG and the extradition of Pennsylvania-based cleric Fethullah Gülen, who Ankara has accused of masterminding the July 15 coup attempt in Turkey through his network of followers.