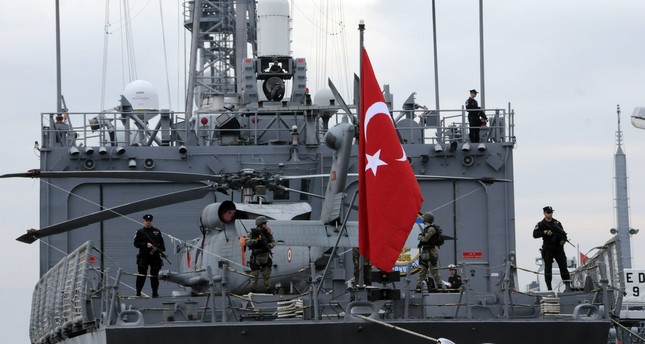 The Turkish Navy has assumed command of a counter-piracy multinational naval task force operating under the 25-nation coalition of the Combined Maritime Forces (CMF).

According to a Turkish Naval Forces statement on Friday, Rear Adm. Tatsuya Fukuda of the Japan Maritime Self Defence Force handed over command of the Combined Task Force 151 (CTF151) to Rear Adm. Emre Sezenler of the Turkish Navy.

The ceremony held on Thursday was chaired by Vice Adm. Kevin Donegan, commander of the U.S. Fifth Fleet, at the CMF headquarters in Manama, Bahrain.

In accordance with United Nations Security Council resolutions, and in cooperation with non-member forces, the CTF151's mission is to disrupt piracy and armed robbery at sea, to engage with regional and other partners to build capacity, to improve relevant capabilities for protecting global maritime commerce and to secure freedom of navigation. The CTF151 was set up in response to piracy attacks in shipping lanes off the coast of Somalia.

With participation from Turkish, Japanese, South Korean and Pakistan naval forces, the task force operates in the Gulf of Aden, the Indian Ocean and off the eastern coast of Somalia, covering an area of approximately 830,000 square nauticle miles.

Share on Facebook Share on Twitter
Previous in Diplomacy Progress has been slow in high-level talks to reunify the divided... Next in Diplomacy Turkey acts as a safety net against the flow of illegal migration...
DAILY SABAH RECOMMENDS