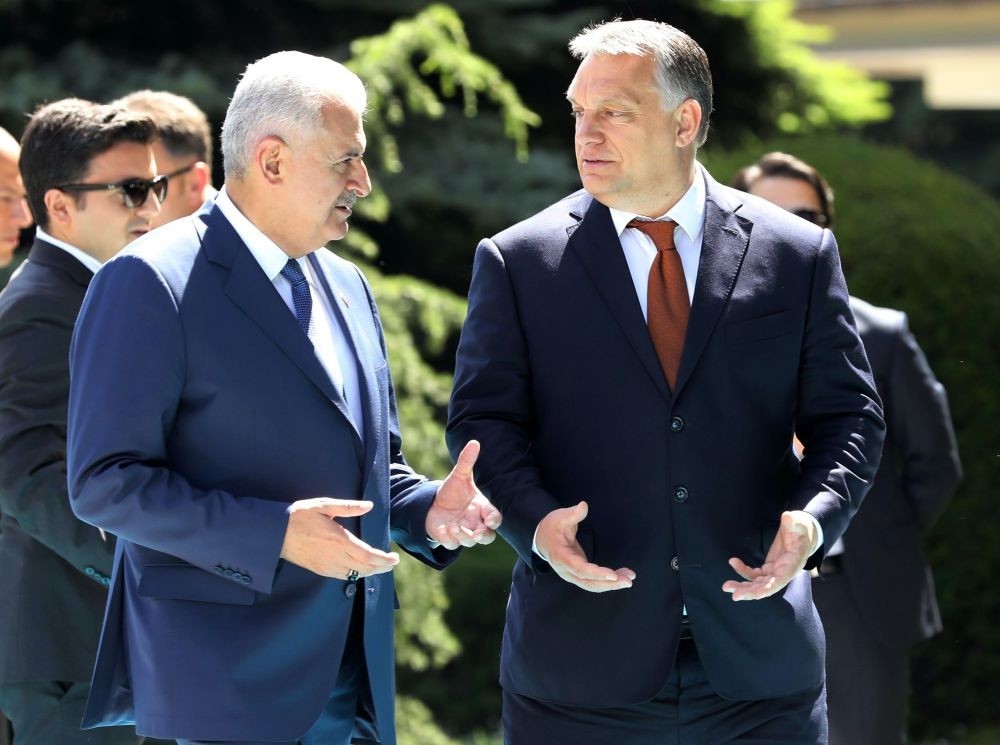 Prime Minister Binali Yu0131ldu0131ru0131m (L) gestures as he walks with Hungary's Prime Minister Viktor Orban upon his arrival at u00c7ankaya Prime Ministerial Office in Ankara on Friday.
by Daily Sabah Jul 01, 2017 12:00 am

Turkey acts as a safety net against the flow of illegal migration to the European continent from the conflict zones, Hungarian Prime Minister Victor Orban said during his visit to Ankara Friday adding that Turkey's efforts must be acknowledged by others as well

Hungarian Prime Minister Viktor Orban said on Friday that Turkey is protecting all of Europe, not only Hungary, from the flow of irregular migration and added that Hungary is grateful to Turkey for its fight against illegal migration. Orban paid an official visit to Ankara on June 30 and during which he met with Prime Minister Binali Yıldırım, Turkish Parliament Speaker İsmail Kahraman and Turkish President Recep Tayyip Erdoğan.

Speaking at a joint press conference with Yıldırım in Ankara, Orban stressed the importance of Turkey's contribution to the fight against illegal immigration, saying his country is grateful. "I would like to thank Prime Minister Binali Yıldırım for Turkey's remarkable job in preventing the flow of illegal immigration to Europe. Hungary expresses its gratefulness and its respects. Turkey is protecting the whole of Europe, not only Hungary, and everybody should be aware of this fact," he said.

Orban also praised the "fruitful" relations between Turkey and Hungary and underlined that a stronger and more stable Turkey is in the interests of Hungary. "Turkey will be a great power in the European region in a very short time. Turkey has a growing economy, growing population and the future of Turkey is quite optimistic. Your population is around 80 million today and it will be 100 million in the near future. Meanwhile in many European countries the population is decreasing and those countries have doubts and worries about the future," Orban said.

He also emphasized common cultural values among Turkey and Hungary that come from deep-rooted relations that should be transferred to new generations. "In this context, we have made significant agreements in the field of education such as joint universities and bilingual high schools," Orban added.

Yıldırım and Orban also attended the Turkey-Hungary Business Forum in Ankara on Friday. Speaking at the forum, Yıldırım invited Hungarian investors to invest in the country, which offers lucrative incentives in several sectors. Yıldırım said that Turkish and Hungarian investors should benefit from incentives introduced in the last year in order to achieve their bilateral trade targets. The environment is convenient for the $5 billion trade target between the two nations, from the current level of $2.1 billion, the prime minister said. "As politicians, it is our duty to reduce bureaucracy, remove barriers and prepare a substructure," he added.