Turkey, Russia may cooperate in Afrin after YPG driven out 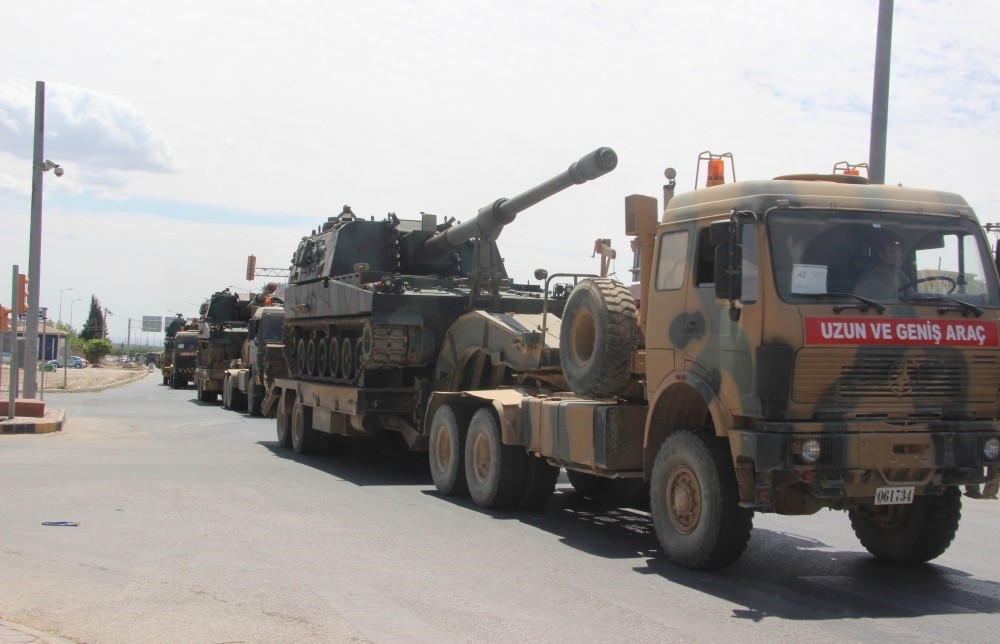 Turkish howitzers on the way of southern Kilis province, near Syria's northern Afrin region.
by Yunus Paksoy Jul 01, 2017 12:00 am

Amid speculation of Turkey's possible military operation to areas held by PKK-linked groups in Afrin, experts said that even though Ankara and Moscow do not exactly share the same opinion on the issue, it is unlikely that Russia will undermine the operation

As details regarding Turkey's possible operation in areas held by the PKK Syrian affiliate Democratic Union Party's (PYD) armed People's Protection Units (YPG) in northern Syria are being gradually revealed, sources say that a joint Turkish-Russian control mechanism during the post-YPG era around Syria's Afrin may be possible.

Ankara and the Kremlin, which have recently agreed to the establishment of de-escalation zones across Syria and a mechanism to deploy troops to Idlib, may join forces in the post-YPG era in Afrin and Tal Rifat if the former decides to launch a cross-border ground operation, according to sources speaking to Daily Sabah.

Earlier this week, military sources told Daily Sabah that Ankara is planning to kick off a new operation in Syria against the YPG-held areas near the Turkish border. As Ankara seems poised to strike YPG-held Afrin, it will have to convince the Kremlin, which has had military presence in the area for a while.

Given that a joint Turkish-Russian plan in Syria's Idlib to deploy troops and control the town together has recently been announced by Turkish presidential spokesperson İbrahim Kalın, Ufuk Ulutaş, the academic and the foreign policy director of the Foundation for Political, Economic and Social Research (SETA), also said the Idlib approach may be implemented in Afrin after the YPG is defeated.

Recent Turkish media reports have claimed that Russia was withdrawing its troops from Afrin, paving the way for a possible Turkish operation. Even though the reports have not been confirmed by the Kremlin, Russia does not appear vehemently against Ankara's plan.

"Depending on the success of the Idlib plan, a similar model could be applied to the Afrin region," Ulutaş said. Stressing that Afrin is directly protected by Russia, Ulutaş said launching an operation in the region would certainly point to an understanding between Ankara and the Kremlin.

However, Oytun Orhan, an expert on the Middle East at the Ankara-based Center for Middle Eastern Strategic Studies (ORSAM) think tank, doubts the possibility of applying a similar mechanism in Afrin. Contending that he does not expect a direct Turkish operation on central Afrin, Orhan said: "Actually, there is uncertainty about which model will be applied for Afrin. I think the Idlib model seems unlikely for the Afrin region."

Orhan said that Ankara will expect the Kremlin to lend support in the fight against the YPG in the Afrin region and Ankara will engage in military activities in the area in coordination with Russia.

"I do not think Russia will openly take action against the YPG. However, it might give the green light to Turkey for a military operation against the group in rural Afrin," Orhan said.

Ulutaş asserted that it would be enough for Turkey even if Russia did not leave the Afrin region. The expert claimed that a bilateral agreement regarding the operation would pave the way for a Turkish offensive.

Murat Yeşiltaş, a security studies expert, recently said the Kremlin does not see eye to eye with Ankara on the YPG issue. However, Yeşiltaş contended that "Russia will not make a fuss about Turkey's operation in Afrin if the operation does not threaten its own military bases."

Yeşiltaş noted that Russia's willingness to see the bigger picture is very relevant. "The Kremlin would rather stay inactive in a Turkish offensive so as not lose its side of the deal for Idlib," he added.Escalating tensions at the border between the Turkish military and the YPG trouble the United States. Washington, which has been heavily supporting YPG, expressed concerns about a possible Turkish operation against its ally in Syria. U.S.-led coalition spokesman Col. Ryan Dillon said: "Anything that takes [YPG] attention away concerns us."

The YPG has been carrying out an offensive around Raqqa to take back the city from Daesh. The U.S.-YPG alliance in Syria has been slammed by Ankara for a long time, to which Washington has remained indifferent.

Meanwhile, the U.S. envoy for the international coalition against Daesh, Brett McGurk, paid a visit to Ankara Friday to reportedly convey Washington's concerns regarding the tensions with the YPG. According to sources in the Foreign Ministry, McGurk met with Deputy Undersecretary Sedat Önal.

McGurk held a meeting last year with YPG representatives along with Kobani local authorities. The U.S. envoy was photographed sitting next to senior PKK militant Abdi Ferhad Şahin, who goes by the alias "Şahin Cilo", and who has been on the Turkish Interior Ministry's most wanted terrorists list with a TL 4 million ($1.14 million) bounty on his head.

The U.S. envoy was also seen meeting with former PKK fighters in Syria in early 2016. Polat Can, a spokesman and one of the founders of the YPG, shared a photo on his Twitter account showing him presenting a plaque to McGurk.

As Ankara dislikes McGurk's close ties to the YPG, Foreign Minister Mevlüt Çavuşoğlu said last month that it would be beneficial if the U.S. replaced him "because he openly supports the PKK terrorist group and its Syrian offshoot."