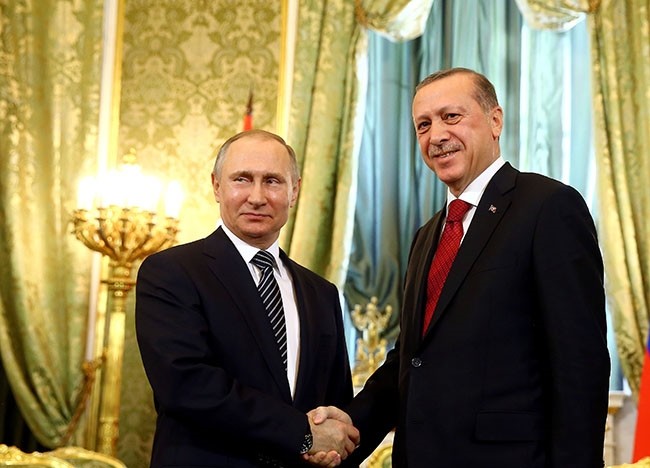 President Recep Tayyip Erdoğan and his Russian counterpart Vladimir Putin will discuss joint projects between their two countries and situation in Syria on the sidelines of the upcoming G20 summit in Germany, Kremlin foreign policy aide Yuri Ushakov said Monday.

"In Hamburg, the presidents [of Turkey and Russia] will discuss the progress of the project implementation of TurkStream, a gas pipeline on the bottom of the Black Sea, and the construction of the first Turkish nuclear power plant Akkuyu," Ushakov said, adding that significant progress has been made recently on both projects.

The 1,100-kilometer (684-mile) TurkStream is set to deliver 63 billion cubic meters of natural gas per year through four parallel lines. The pipeline will be laid on a 900-kilometer route under the Black Sea to reach the Thrace region of Turkey along the Black Sea coast.

The Akkuyu Nuclear Power Plant, worth $20 billion and featuring four reactors, will have an installed capacity of 4,800 megawatts (MWs) and a working lifetime of 8,000 hours per year. Once operational, the plant is estimated to meet between 6-7 percent of Turkey's electricity demand.

It will produce approximately 35 billion kilowatt-hours (KWHs) of electricity every year, once completed. The power plant will have a service life of 60 years.

The Kremlin aide also said that during discussions on international and regional issues the main emphasis would be put on the peace process in Syria.

"Close cooperation between Russia and Turkey allowed us to establish a regime of cessation of hostilities in Syria, and a series of intra-Syrian consultations in Astana format. The implementation of the de-escalation zones is on the agenda," Ushakov said.

On May 4, Russia, Turkey and Iran signed a deal in the Kazakh capital of Astana to establish de-escalation zones in Syria.

The guarantor states previously agreed to take all the necessary measures to continue fighting Daesh, al-Nusra and other terrorist groups both within and beyond the de-escalation zones.