Erdoğan to meet with Merkel ahead of G20 summit 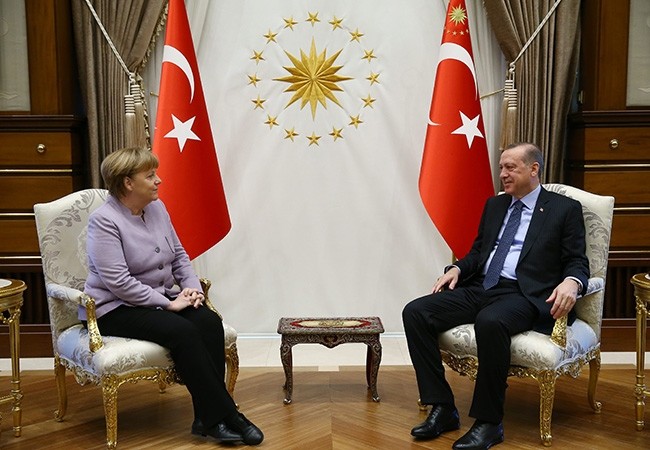 German Chancellor Angela Merkel will likely meet President Recep Tayyip Erdoğan on Thursday, the eve of a G20 summit, her spokesman said Wednesday as tensions simmer between Ankara and Berlin.

Merkel's spokesman Steffen Seibert said the talks would "likely take place tomorrow," a day before Group of 20 leaders meet in the northern port city of Hamburg.

Turkey strongly condemned and issued a diplomatic note to Germany on Tuesday over an anti-Erdoğan banner displayed in front of the German Chancellery ahead of the G-20 Summit in the country.

A banner on a car was hanged in front of the German Federal Chancellery reading "Do you want to win this car? Then kill the dictatorship" ahead of the gathering of the world's 20 leading economic powers, including Turkey, in Hamburg Friday and Saturday.

The foreign ministry "strongly condemned" the incident in a statement released, saying that the banner in question openly calls for violence.

Last month, German government approved a plan to remove its troop reconnaissance aircraft from Incirlik Air Base in the southeastern province of Adana, and relocate them to an air base in Jordan.

Last week Berlin refused to allow Erdoğan to address members of the large ethnic Turkish community in a rally in Germany ahead of the G20 summit.