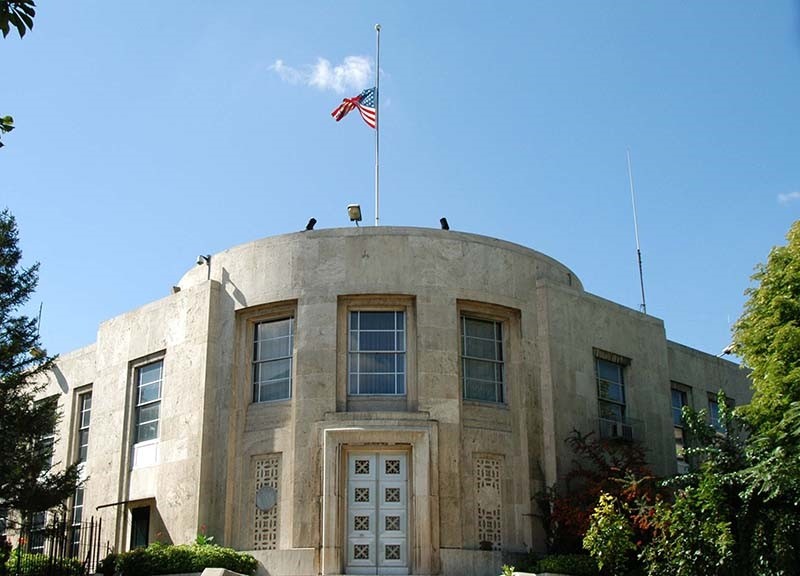 The U.S. Embassy building in the capital Ankara seen in this undated file photo (Sabah Photo)
by Daily Sabah Jul 05, 2017 12:00 am

Apparently a late delivery of a letter led to an awkward release of a statement by the U.S. embassy against the claim that U.S. missions in Turkey were in contact with suspects from the Gülenist Terror Group (FETÖ). Embassy sources said they would "respond" to the claim soon.

The Chief Prosecutor's Office in Istanbul told reporters on Tuesday that suspects who were behind a controversial espionage plot known as the "MİT trucks case" in reference to the Turkish National Intelligence Organization (MİT) repeatedly contacted U.S. missions. The revelation had sparked public outrage over possible links between U.S. officials and the terrorist group blamed for last year's coup attempt.

The embassy first denied receiving a request from Turkish prosecutors on the contents of the phone calls with suspects, but when the prosecutors responded in mere minutes about the delivery and said the request was sent on June 30, they acknowledged the request was received only Wednesday afternoon approximately at 3:00 p.m.

Earlier in the day, the U.S. embassy said in a statement that they have not received any official inquiry from the prosecutor's office regarding the probe.

Later, speaking to Daily Sabah, embassy sources said they received the request and would respond to it in upcoming days.

Chief Prosecutor İrfan Fidan in Istanbul, who is conducting the investigation in the case, told reporters on Tuesday that they discovered multiple phone calls one day and two months after the incident by suspects and requested embassy officials to disclose the contents of the phone calls, adding he was still awaiting a reply.

According to a new indictment released by Turkish prosecutors Tuesday, two "civilians" from the Gülenist Terror Group (FETÖ) who personally oversaw the raid on trucks belonging to Turkey's National Intelligence Directorate (MİT) in 2014, made multiple phone calls to the U.S. Embassy and the local U.S. consulate just one day after the raid by FETÖ-linked troops and prosecutors.

Istanbul's Chief Public Prosecutor İrfan Fidan, who drafted the indictment, said they do not know the content of the calls that were made.

According to the indictment, two "civilians" from FETÖ who personally oversaw the raid on the trucks belonging to the MİT in 2014, were the ones who made the phone calls to the U.S. missions. The indictment says that FETÖ leader Fetullah Gülen - whose extradition is sought from Washington by Ankara for multiple crimes in Turkey - ordered his followers to expose a secret operation by MİT being conducted in southern Turkey. On Jan. 19, 2014, MİT trucks bound for Syria were stopped and searched by FETÖ-linked officials and the raid in the city of Adana made headlines as FETÖ spread photos of the raid publicly, despite national security laws forbidding the search of the trucks.

Muharrem Gözüküçük and Bayram Andaç named in the indictment as "callers" to the embassy and the consulate are "civilian imams" for FETÖ, according to prosecutors, a term used to describe FETÖ's point men who commanded the group's infiltrators in the army, police, judiciary and bureaucratic positions. Andaç "organized the raid" and on Jan. 20, he made three phone calls to the said U.S. missions in Turkey. While it is not clear which consulate he called, it is likely that he contacted the consulate in Adana where the raid was executed. Andaç made phone calls again to the consulate on Jan. 21 and Jan. 24. A teacher by profession, Andaç was a high-ranking figure in FETÖ. The other suspect in the indictment, Muharrem Gözüküçük, a civil servant at Turkey's Labor Ministry, was the "handler" of Colonel Erdal Turna, a senior military intelligence officer in Ankara who wiretapped the phones of MİT staff members and uncovered the secret MİT operation. Gözüküçük phoned the U.S. Embassy twice on March 6, 2014, according to the indictment. The calls are highly suspicious, as they were made from cell phones used by suspects only after the raid.

"The U.S. department of Justice and other American agencies remain in close contact with their Turkish counterparts in the effort to investigate last year's coup attempt and bring the perpetrators to justice," the U.S. embassy statement said Tuesday, adding that the MİT trucks case is not directly related to the coup attempt. Washington has long shied away from directly blaming FETÖ for the coup bid.