Erdoğan, Putin meet on the sidelines of the G20 Hamburg summit 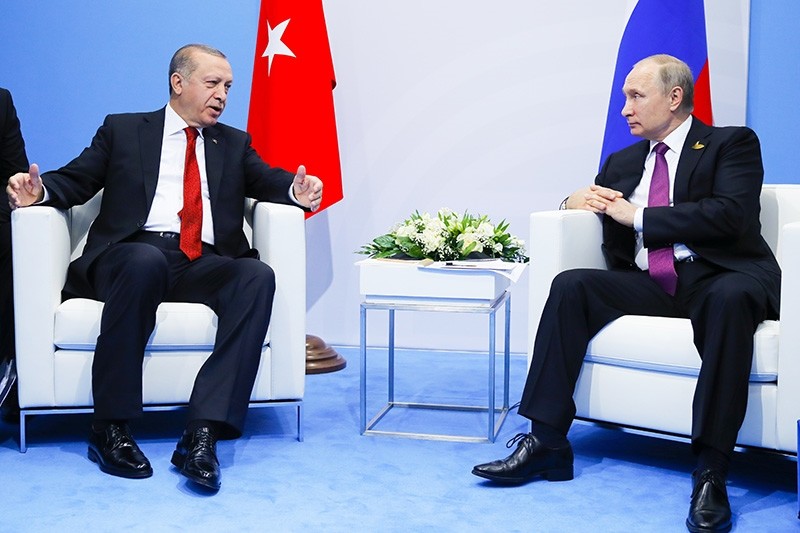 Turkish and Russian presidents met Saturday within the scope of G20 Hamburg Summit in Germany.

Speaking to reporters before the meeting, Recep Tayyip Erdoğan said he believes the economic relations between the two countries, the developments at tourism and defense industry will bring bilateral relations to a much more strong position.

"Above all, the expectations at the region regarding Syria and Iraq are very high. I place importance to our meeting also from that point," Erdoğan emphasized.

Putin said at the start of their meeting that Erdoğan's stance "has made it possible to improve the situation in Syria."

Erdogan similarly praised Putin's role and noted that efforts by Russia and Turkey "set a clear example for the international community."

Russia, Turkey and Iran have made a deal in May to set up de-escalation zones in Syria, but specifics related to their boundaries and monitoring mechanisms are yet to be determined.

In a separate development, Russia and the U.S. made a deal to declare a cease-fire in southwestern Syria beginning Sunday. The agreement also involved Jordan.

The meeting between the two leaders lasted for approximately 1 hour.

The leaders of world's 20 major economies are holding the two-day summit in Hamburg where they discuss the global economy, climate change, the fight against terrorism and other international issues.

Turkish Foreign Minister Mevlüt Çavuşoğlu and his Russian counterpart Sergey Lavrov also participated in the meeting along with other officials from both sides.