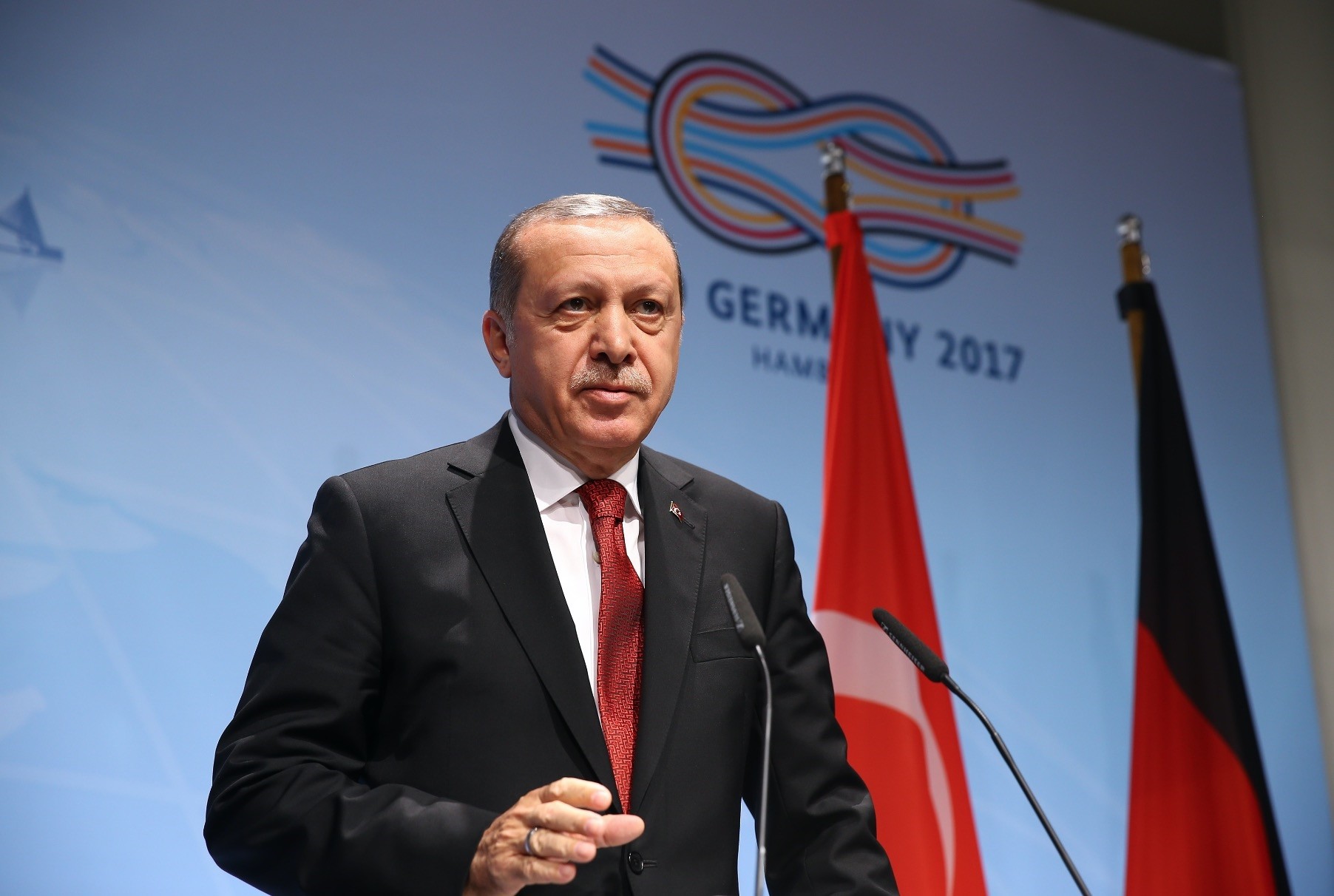 Erdou011fan said, as part of its humanitarian efforts in Africa, Turkey will continue work in Somalia, despite repeated threats from terrorist groups.
by Serdar Karagöz
Jul 10, 2017 12:00 am

Turkey's understanding of inclusivity and global justice suggest that concrete steps need to be taken at the local level around the world and, Turkey's efforts in Africa, are great examples of this method, says president Erdoğan

President Recep Tayyip Erdoğan, speaking to journalists late Saturday on his way back from the G20 summit in Hamburg, Germany, said one of the topics headlining the summit was global humanitarian efforts, global justice and inclusivity. "The main theme of the G20 summit in Antalya in 2015 was inclusivity, or more appropriately, global justice." He said Turkey focused on matters of global importance, as evidenced by its policies to help Africa, starting by declaring a year of Africa in 2005 and the much-praised aid program in Somalia.

"We demonstrate what we understand of inclusivity and global justice through our policies in the countries we go to. For example, in Somalia, for which countries repeatedly meet but do nothing, we built our largest embassy building. We built a hospital, initiated a program for training medical personnel. Our nongovernmental organizations have made significant investments there. A Turkish firm built the International Mogadishu Airport and is now operating it. The Somali government is earning between $2 million and $2.5 million a year from the firm." He added: "This is inclusivity. This is justice. Despite repeated threats from terrorist groups, we, the state, private firms, nongovernmental organizations, will continue our work in Somalia."

He referred to a new U.S. report that listed the most generous countries in development aid.

"The U.S. is in the lead with $6.3 billion. Turkey comes second with $6 billion and the U.K. third with $2.7 billion. In terms of per capita income, Turkey comes first and the United Arab Emirates second."

Another issue Erdoğan pointed out was women entering the workforce, in relation to which Turkey is making the most progress among developing countries.

The president said he had 12 separate meetings with leaders who attended the G20 meeting, aside from discussions during and on the sidelines of summit meetings.

His discussions with U.S. President Donald Trump and Russian President Vladimir Putin were focused on assessing the developments in Syria, especially the de-escalation zones and, Astana and Geneva talks. "Officials from all sides will continue to further discuss these matters."

On the continuing Gulf crisis, all sides had agreed on the importance of encouraging dialogue among sides to end the blockade on Qatar and de-escalating tension. "I may visit the region, especially Qatar, Kuwait and Saudi Arabia, after July 15 to help support efforts to establish dialogue."

When asked if this meant whether Turkey was acting as a mediator between the two sides, Erdoğan said: "Kuwait has taken up the role of mediator and we support them. Our efforts are directed at helping such efforts."

CHP'S MARCH NOT FOR JUSTICE

President Erdoğan repeated his opinion that Republican People's Party (CHP) Chairman Kemal Kılıçdaroğlu's "justice march" from Ankara to Istanbul, which concluded yesterday, had nothing to do with justice.

His four-month10-day imprisonment when he was the mayor of Istanbul in 1999 took place at a time when Bülent Ecevit was the prime minister, he said. Ecevit served as prime minister from the CHP in the 1970s and later in the 1990s from his Democratic Left Party (DSP). "While Ecevit was from the DSP at the time, he is a politician still respected and followed by the CHP. This is the same person who shouted, 'Throw this woman out from here,' in reference to Merve Kavakçı."

Kavakçı was the first parliamentarian who entered the assembly wearing a headscarf, sparking serious furor from the secularist benches. Subsequently, she lost her seat and even citizenship.

"They ignored justice then. They committed so much injustice in this country and now they seek justice. He [Kılıçdaroğlu] cannot accept any challenger within his party, sending anyone who wants to become a candidate to leadership to the disciplinary board. Anyone who voices anything critical of him at the party's parliamentary group meeting is accosted and thrown out. These are the people who are talking about justice."

He said the fight against the Gülenist Terror Group (FETÖ) will continue without any pause, adding that every new day brought to light new suspects and new criminal activities of the cult.

"We need to completely cleanse the virus. There can be no deadline," he said a week before the first anniversary of the deadly coup attempt by the cult that claimed more than 200 lives. He cited the encrypted communication applications used by FETÖ, ByLock and Eagle, that led to FETÖ operatives working at state agencies. "When we encounter this virus, we will do what is necessary. How can we go forward without cleansing all departments, be it the military, law enforcement, judiciary, ministries, from this virus? That's why, there will be no compromise."

When asked about the Western stance toward FETÖ, Erdoğan said: "They tell me they'll be doing everything possible, and then refer to the judicial angle, asking us for further proof."

"The conclusion of the cases involving FETÖ members in Turkey will be very important in this regard. Once we go to these countries with court decisions, our hand will be stronger," he said.

The president said there were also countries that gave full-hearted support to Turkey.

On the matter of the nine people from the Amnesty International detained in Büyükada, Istanbul last week, Erdoğan said his previous comments about the individuals in question being suspected of certain links to last year's coup were based on police reports and the truth will eventually come out after a judicial process. "However, there is the case of Taner Kılıç, who was detained prior to the group, which is different. He had downloaded ByLock on this phone. The only thing I can say about the case is that I hope it concludes soon."

He also dismissed Amnesty International's statements, commenting on their reaction to Erdoğan's four-month 10-day imprisonment in 1999. "They didn't even receive us properly at the time. Besides, what of their reactions then. I still went into prison."