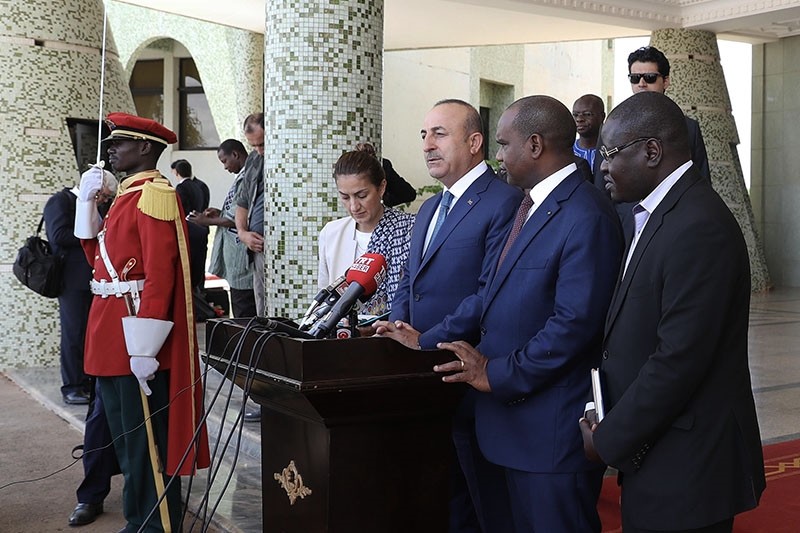 Foreign Minister Mevlüt Çavuşoğlu said on Wednesday that Qatar's recent deal with the U.S. on anti-terror financing is "a sign of its determination in fighting terrorism."

"I know that Qatar has always been with us on fighting terrorism. This deal is a sign of Qatar's determination and sincerity in its fight against terrorism," the top diplomat said.

Qatar and the U.S. signed a deal to combat the financing of terrorism, during a visit to Doha by U.S. Secretary of State Rex Tillerson on Tuesday, a move that comes as the Gulf crisis continues in the region.

The four Gulf countries then presented a list of demands for Qatar, including the closure of the Al Jazeera television network, as a condition to lift the sanctions they imposed on the tiny Gulf country, and warned that the country could face further sanctions if it does not meet the demands.

Qatar vehemently denies the accusations, saying the blockade is in violation of international law.

Speaking about the Gulf crisis, Çavuşoğlu said that Turkey supports U.S. efforts over the Qatar crisis.

The minister added that he had discussed with the Burkina Faso president bilateral relations in fields of education, economy, mining, textile, construction, and defense.

Kabore said that Turkey was a great economic power from which Burkina Faso wants to benefit.

Improving the relations between the two countries is a key goal, he added.

Çavuşoğlu also underlined the significance that Turkey attaches to Africa.

He said the number of Turkish embassies in the continent would reach 50 with the instructions of President Recep Tayyip Erdoğan.

He added that Turkey with all its institutions including the Turkish Airlines, the Turkish Cooperation and Coordination Agency (TIKA) and the Disaster and Emergency Management Presidency of Turkey (AFAD), was set to embrace all of Africa.

"Africa sees our sincere attitude towards them and knows very well that we are not here with a colonial policy."

In the past 12 hours, the Turkish foreign minister has visited three African countries, including Burkina Faso, Liberia, and Ivory Coast, where he also attended a meeting by the Council of Foreign Ministers of Organization of Islamic Cooperation.