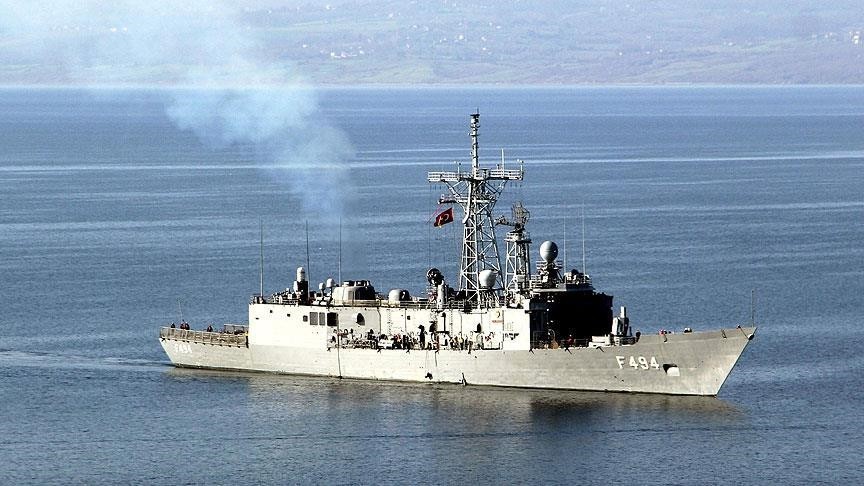 While Greek Cyprus's approach to certain issues during the reunification talks in Switzerland, which lasted 10 days, led to the breakdown of the negotiations, according to Ankara, new tensions emerged yesterday as French oil giant Total and Italian energy group Eni have announced they will start natural gas drilling on Sunday in Block 11 in the Mediterranean on behalf of Greek Cyprus. Ankara strongly condemned the planned activity following the news yesterday, calling Greek Cyprus "insincere" and announcing they will take steps against what it called unilateral decisions. In line with this, it was also reported yesterday that the Turkish Armed Forces (TSK) are monitoring the vessel set to conduct drilling on behalf of the Greek Cyprus in the Eastern Mediterranean.

In a statement released Thursday on its website, the commander-in-chief's office said that the TCG Gökçeada frigate has been assigned to carry out the task of monitoring the West Capella, a vessel that will perform drilling.

According to the Habertürk daily, the West Capella vessel has already arrived in Cyprus. It was also said that the trial and control work before drilling starts will take several days. The depth of the drilling is expected to be between 3,500 meters and 4,000 meters at depths of 700 meters. The work is expected to last about two to three months and the first results are expected to be announced in the autumn. Also, the fact that Block 11 is close to the Zohr area found by Egypt strengthens the possibility that rich hydrocarbon deposits exist there.

'WE WILL TAKE STEPS AGAINST THESE UNILATERAL STEPS'

Right before the TSK's announcement, Foreign Minister Mevlüt Çavuşoğlu made a statement yesterday at a press conference following his meeting with the Gambian foreign minister. Çavuşoğlu criticized Greek Cypriot activities in the Mediterranean, and said: "We will take steps against these unilateral steps."

Referring to the failed Cyprus negotiations, Çavuşoğlu accused the Greek Cypriots of "insincerity." Moreover, recalling that Greek Cyprus continued drilling activities in the Mediterranean while the peace negotiations were ongoing, Çavuşoğlu said: "While we were carrying out negotiations for the settlement on Cyprus, we saw that Greek Cyprus brought a ship to the region for drilling. Fundamentally, it was an indication that Greek Cyprus was insincere in the solution." Çavuşoğlu also said that instead of concentrating on forging a solution, Greek Cyprus tried to unilaterally conduct provocative drilling. "The result could not be obtained because they were not sincere. We cannot be insensitive to the single-centered activities of the Greek side. We are cooperating with the Energy Ministry on the steps to be taken. We will take steps against these unilateral measures for sure," he added.

Unlike previous drillings conducted with Navtex, Greek Cyprus closed five miles around the Block 11 and two neighboring blocks to sea traffic. Even though Block 11 is not on the Turkish Cypriot side of the island, and Ankara insists that "all the resources of the island belong to both the communities."

Speaking to Habertürk, a high-level diplomatic source said they are following developments. "There are two ways ahead. Either everyone will get what it subtracts or the natural gas will be shared. These moves of the Greek side show that there is no chance of a solution on the island anymore. The principle of rightful sharing is not counted. The true intention has come out," the source said. The source also said that the Turkish delegation will go to Turkish Cyprus and prepare a road map with the Turkish side about what will happen next and what steps will be taken. They also pointed to what President Recep Tayyip Erdoğan said at the 22nd World Petroleum Congress in Istanbul, about that international law states hydrocarbon resources belong to all parties on the island. "Our expectation from those who are party to developments in Cyprus is to avoid the steps leading to new tensions in the region. I would like to remind them that they could face the risk of losing a friend like Turkey, not just in the region, but anywhere and in any field," Erdoğan warned.

Ankara and the Turkish Cyprus responded with reciprocity to previous Greek Cypriot hydrocarbon exploration. In response to Greek Cypriot drilling in the past, the Barbaros Hayrettin Paşa seismic research vessel conducted drilling. Moreover, Turkish military vessels also patrolled for "security reasons." Energy and Natural Resources Minister Berat Albayrak said during his previous visit to the Barbaros Hayrettin Paşa that Turkey will begin drilling in the Mediterranean by purchasing its own ship this year. "We predict that we will sink our first well in the Mediterranean before the end of this year," Albayrak said.