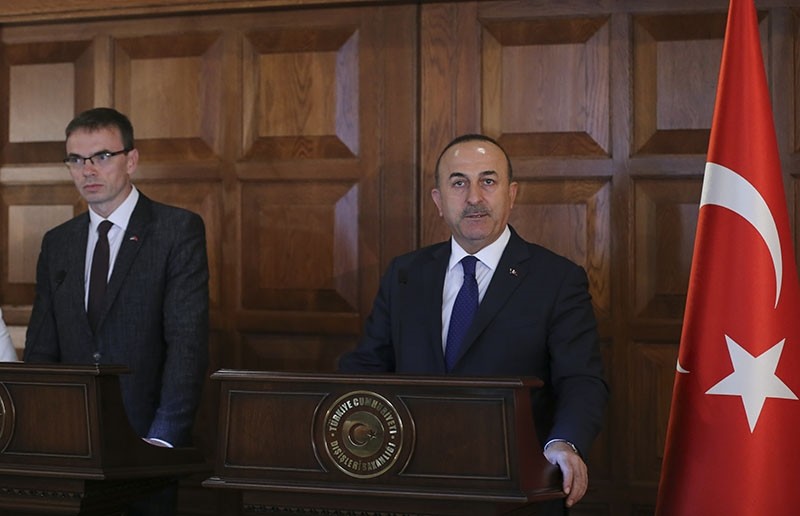 Turkish Foreign Minister Mevlüt Çavuşoğlu said Tuesday that Turkish Cypriots also have rights on the resources around Cyprus amid the Greek Cypriots' "one-sided" hydrocarbon drilling efforts in disputed zones, noting that Turkey and the Turkish Republic of Northern Cyprus (TRNC) will consider a different roadmap than unfruitful peace talks.

"Greek Cypriots' unilateral measures here are not correct because Turkish Cypriots also have rights on the reserves around the island of Cyprus," Çavuşoğlu said in a joint news conference with Estonian Foreign Minister Sven Mikser in Ankara.

Due to the dispute over Cyprus' maritime Exclusive Economic Zone, established with the 1982 United Nations Convention on the Law of Sea covering 13 exploratory drilling blocks, the exploitation and export of the gas discovered in this area has not been allowed.

However, despite the disputed status, the Greek Cypriot administration continues to unilaterally open new tenders for hydrocarbon explorations without any collaboration with the Turkish Cypriots. 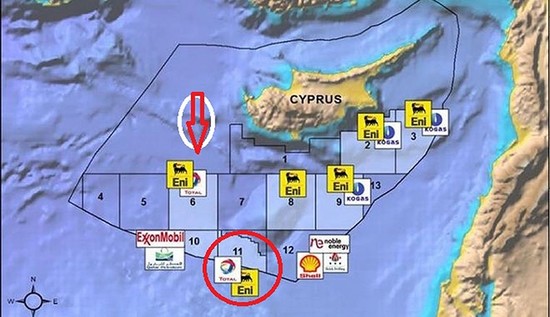 French oil giant Total and Italian energy group Eni have announced they will start natural gas drilling on Sunday in Block 11 in the Mediterranean on behalf of Greek Cyprus.

In response, Turkey has assigned TCG Gökçeada to carry out the task of monitoring the West Capella, a vessel that will perform drilling.

The latest talks to reunify the island of Cyprus in the Swiss town of Crans-Montana ended in failure on July 7.

Representatives from the EU, the Turkish and Greek Cypriot leaderships, and the guarantor nations of Turkey, Greece and the U.K. participated in the discussions that began at the end of last month to resolve the dispute.

The U.N. sought a peace deal to unite Cyprus under a federal umbrella that could also define the future of Europe's relations with Turkey, a key player in the conflict.

Stating that the Greek side did not want peace as a result of the talks, Çavuşoğlu said that the EU should not use the Cyprus issue as an obstacle in its relations with Turkey.

"The EU did not kept its word after the [2004] referendum. Now the embargo imposed on the TRNC should be removed immediately. It is inhumane, you allow one side to become a member state although they don't deserve it while they keep pressuring the other side," Çavuşoğlu said.

Meanwhile, Greece's Foreign Minister Nikos Kotzias blamed Turkey over the failure in the talks, saying that Turkey is not ready to come to an agreement over the issue.

Kotzias said the talks failed because of Turkey's insistence to keep troops on Cyprus and maintain the right to militarily intervene there. He says any future peace talks will have to first resolve this core issue.

The Greek foreign minister said after talks with his Cypriot counterpart Tuesday that any new round of the Cyprus peace talks must be better prepared.

He faulted United Nations envoy Espen Barth Eide who facilitated the talks for showing up unprepared.

However, Çavuşoğlu hinted to other options and processes for Turkey and the TRNC in the future. "I must say that this process cannot go on indefinitely," Çavuşoğlu said, noting that he will go to the TRNC on Tuesday and hold talks with presidents and political party leaders in both Turkey and TRNC to set up a road map.

Meanwhile, Prime Minister Binali Yıldırım will attend events to be held in honor of the 43th anniversary of Turkey's military operation on the island. According to Prime Ministerial sources, Yıldırım also will meet with Turkish Cypriot officials.

The Eastern Mediterranean island has been divided since 1974, when decades of inter-communal violence was followed by a Greek Cypriot coup to unite the island with Greece, and Ankara's intervention as a guarantor power.