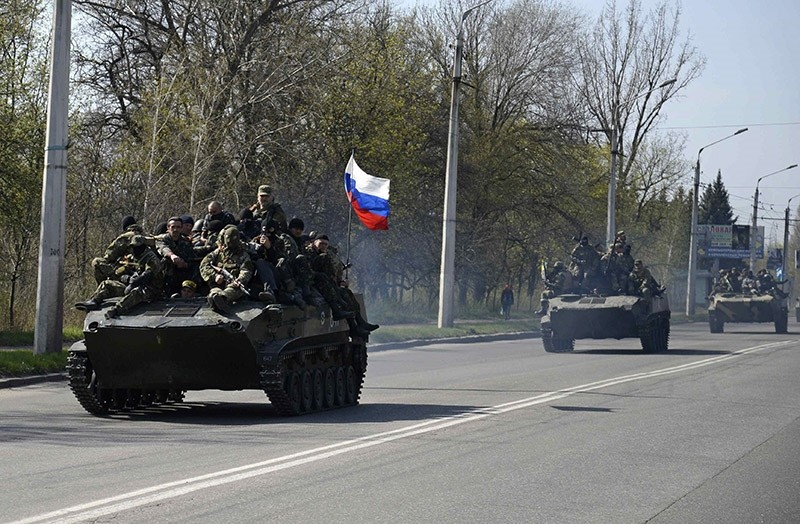 Armed men, wearing black and orange ribbons of St. George - a symbol widely associated with pro-Russian protests in Ukraine, drive an airborne combat vehicle (L) with a Russian flag seen on the top, outside Kramatorsk April 16, 2014. (Reuters Photo)
by Daily Sabah Jul 20, 2017 12:00 am

The Turkish foreign ministry Thursday reaffirmed the country's support for Ukraine's territorial integrity after separatist leaders proclaimed a new state in the war-torn east of the country.

"[Turkey] considers the statements of separatist groups in eastern Ukraine on the establishment of a new state to be in violation of Ukraine's territorial integrity. It is clear that such declarations and acts hinder the solution efforts," the foreign ministry spokesperson Hüseyin Müftüoğlu said.

Müftüoğlu reiterated that Turkey believed the situation in eastern Ukraine should be solved based on the country's territorial integrity, sovereignty and international law.

"[Turkey] will continue to support all peaceful initiatives to this end, primarily the Minsk process," Müftüoğlu added.

The foreign ministry spokesperson also called upon all relevant parties to "act likewise."

Separatists in eastern Ukraine proclaimed a new state Tuesday that aspires to include not only the areas currently under their control, but the whole of Ukraine.

The separatist-aligned Donetsk News Agency quoted local leader Alexander Zakharchenko saying that the rebels in Donetsk, Luhansk as well as representatives of other Ukrainian regions would form a state called Malorossiya, which translates to "Little Russia."

Eastern Ukraine has been locked in conflict since 2014 when a Russian-backed uprising erupted in the region, resulting in the proclamation of two unrecognized separatist republics.

Starting June 1, a deal between Turkey and Ukraine allowing their citizens to travel to each other's countries without passports came into force. Under the deal, citizens of both countries will only need to present their national ID cards for stays of up to 90 days.