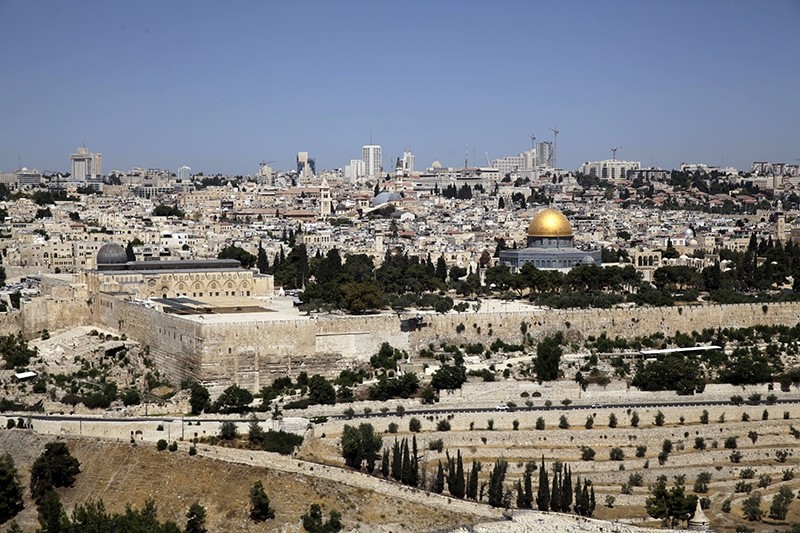 President Recep Tayyip Erdoğan condemned the Israeli restrictions on Al-Aqsa Mosque, urging the international community to act on practices against the freedom of worship at Islam's third holiest site.

A statement released on the Presidency website said that it is unacceptable for Israel to impose new restrictions on Muslims' entrance to the al-Haram ash-Sharif complex - which includes Al-Aqsa Mosque and the Dome of The Rock - by justifying it through the incident on July 14, which was also regretted by Turkey.

Erdoğan condemned Israel's attitude despite all warnings, prevention of Muslims' performing Friday prayers at the Al-Aqsa Mosque and the use of excessive force by Israeli security forces against people who gathered for Friday prayers as the term chairman of the Organisation of Islamic Cooperation (OIC), while extending his condolences to those who were killed during the clashes in Jerusalem.

"The Organisation of Islamic Cooperation was founded in 1969 during an attack against al-Haram ash-Sharif; and today the Islamic world stands with our Palestinian brothers with the same spirit of unity and solidarity," Erdoğan said.

The president said that efforts to remove restrictions in Al-Aqsa Mosque will be continued in coordination with the Jerusalem Islamic Waqf, Palestinian President Mahmoud Abbas and Jordanian King Abdullah II.

The president urged Israel to return to the status quo before the latest restrictions.

Shorty after the statement was released, Erdoğan spoke with his French counterpart Emmanuel Macron over the phone regarding Al-Aqsa tensions and expressed their worries regarding restrictions against Palestinians and deaths.

Presidency sources told Anadolu Agency that the two presidents agreed to show joint efforts to resolve the problem and return to calm in the region.

Erdoğan and Macron also discussed the latest developments in Syria and Libya, as well as the Qatar row ahead of Erdoğan's Gulf tour involving Saudi Arabia, Kuwait and Qatar, which is expected to start on Sunday.

Protests erupted Sunday in Jerusalem after the mosque's leadership spoke out against metal detectors that were installed following a gun attack on July 14 that left three Palestinians and two Israeli police officers dead.