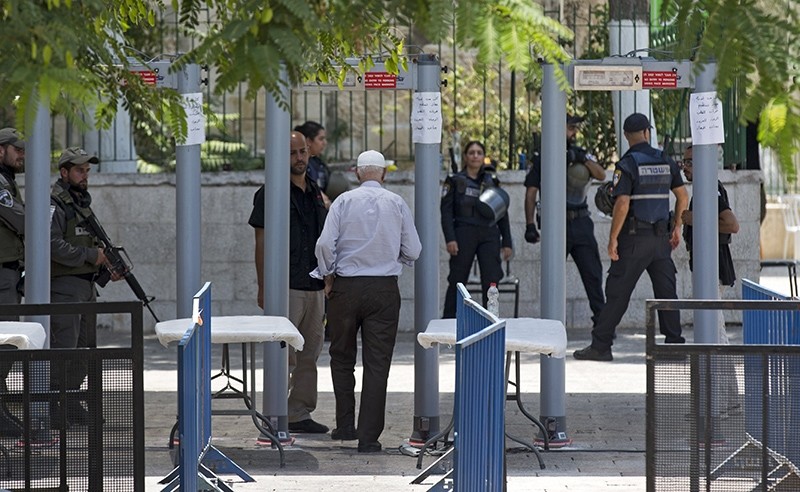 A Palestinian worshipper passes metal detectors installed as new security measures, at the entrance to the Al-Aqsa compound, in Jerusalem, 22 July 2017 (EPA Photo)
by Daily Sabah with AA Jul 23, 2017 12:00 am

"We expect Israel to correct this mistake by take into consideration the sensitivities of the Islamic world" Yıldırım said.

The prime minister also condemned recent demonstrations held by a group outside a synagogue in Istanbul.

"We have been living in harmony with our Jewish citizens, —who are some of the most important elements of our societal heritage,- for centuries," Yıldırım said and added: "We are legacies of a civilization that takes differences as wealth regardless of religion, sect, language or race. For this reason, we do not approve of acts against the houses of worship of our Jewish citizens, and we urge moderation among our citizens."

Yıldırım also highlighted that terrorism is a common threat to all humanity and has no religion, language or race.

Anger has spilled across the West Bank since last week when Israel shut the Al-Aqsa Mosque, venerated by Muslims and Jews, who call it the Temple Mount, following a deadly shootout.

The mosque was reopened after the two-day closure, with Israel installing metal detectors and cameras at the mosque's gates that Palestinians say aim to change the status quo -- a delicate balance of prayer and visiting rights.

Israel refused to remove the detectors, claiming the security measures are similar to procedures taken at other holy sites around the world.

Three Palestinians were killed Friday in protests against Israeli measures around the holy site. Three Jewish settlers were also killed in an alleged Palestinian attack in a settlement in the West Bank.

The city of Jerusalem is sacred to members of all three Abrahamic faiths -- Muslims, Jews, and Christians -- and the Al-Aqsa Mosque represents the Islamic world's third-holiest site.