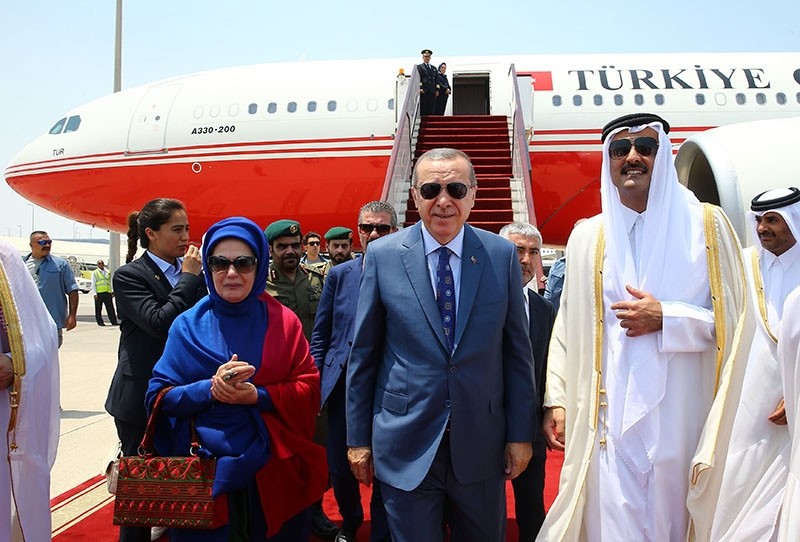 As part of Ankara's efforts to help ease the recent crisis between several Gulf and other Arab states and Qatar, President Recep Tayyip Erdoğan visited Saudi Arabia and Kuwait on Sunday, and later visited Qatar yesterday where he was received by Qatari Emir Sheikh Tamim bin Hamad al-Thani. During his visit, it was highlighted that Turkey supports continuing dialogue and diplomatic efforts to overcome the crisis, according to a statement released by the presidential spokesman.

In addition to the Gulf crisis and bilateral relations, the parties also discussed recent developments in Syria and Iraq as well as counterterrorism issues, Kalın's statement said.

"Moreover, the importance of acting in unity for the Muslim countries and respecting each other's sovereignty was highlighted," the statement said.

Throughout the nearly two-month crisis, which began on June 5 when Saudi Arabia, the United Araba Emirates (UAE), Bahrain, Egypt and several other states cut off diplomatic ties with Qatar amid accusations that the Gulf nation funds terrorist groups, Turkey has been calling on the parties to solve the issue through diplomacy and that both the economic and political sanctions would not serve the interests of involved states.

On several occasions, Erdoğan urged the Saudi leadership to take a constructive role in the crisis and said they should act as the "older brother" in finding a solution.

Ankara has tried to not take any sides during the dispute, as it seeks to maintain strategic relations with both the Saudi administration and also the Qataris. Prior to his departure for the two-day visit, Erdoğan on Sunday also said that the crisis was a lose-lose game for the Gulf states.

"Nobody has any interest in prolonging this [Qatar] crisis anymore," Erdoğan told reporters, adding that Turkey supports an immediate solution to the issue.

"It is the enemy circles who benefit from the current crisis in Qatar. We have made the necessary suggestions to the parties, and continue to do so. The first stop of the visit is Saudi Arabia. Saudi Arabia has a large role in finding a solution to the Qatar crisis," the president said and also added that Qatar has made significant diplomatic efforts during the process.

After his visit to Jeddah, Erdoğan also met with Kuwaiti Emir Sheikh Sabah al-Ahmad al-Sabah in Kuwait, the second leg of the official visit. Kuwait has also been acting as a mediator between the Saudi-led axis and the Qatari administration.

The Saudi-led anti-Qatar axis have imposed a land, sea and air blockade on Qatar and presented a list of demands to Doha to end the siege, including the closure of the Al Jazeera television network and Turkish base in Doha, or face further sanctions.

The Qatari leadership has said they are open to dialogue as long as their national sovereignty is respected and the demands are not imposed unilaterally.

In addition to diplomatic efforts to solve the crisis, Turkey has also been sending food, including fruits, dairy and poultry products by ship and air, to help Qatar beat an embargo. The shipments of supplies were sent in nearly 200 cargo planes since the crisis began.