Dialogue with EU needs to continue despite setbacks: FM Çavuşoğlu 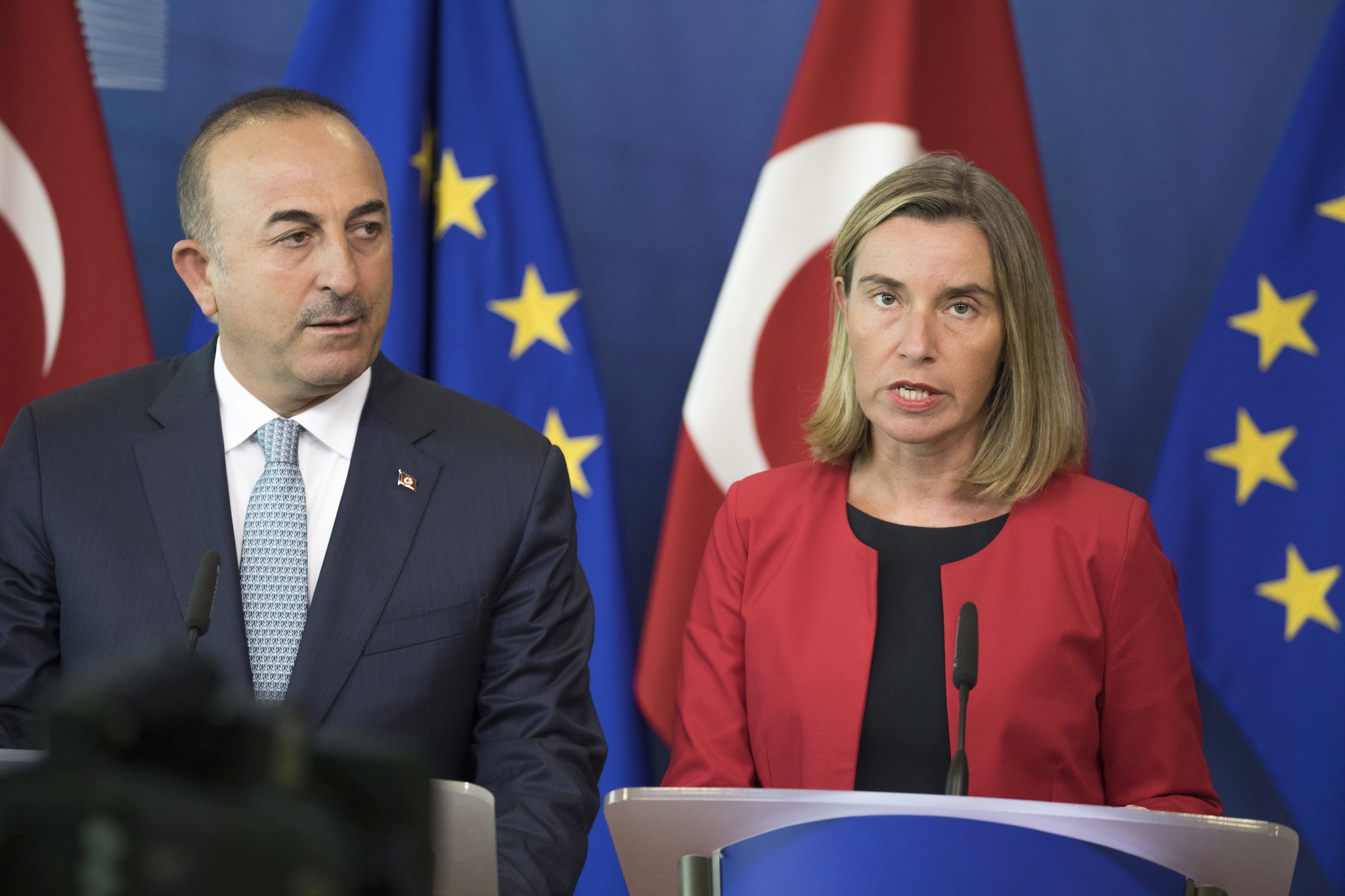 Foreign Minister Mevlu00fct u00c7avuu015fou011fu, and High Representative of the EU for Foreign Affairs and Security Policy Federica Mogherini, speak at a press conference in Brussels. (AP Photo)
by Daily Sabah Jul 25, 2017 12:00 am

Foreign Minister Mevlüt Çavuşoğlu said dialogue between Turkey and the European Union needs to continue despite having several setbacks.

Speaking at a joint press conference on Tuesday with EU High Representative for Foreign Affairs and Security Policy Federica Mogherini, EU Commissioner for European Neighbourhood Policy and Enlargement Negotiations Johannes Hahn and Turkey's chief negotiator EU Minister Ömer Çelik, Çavuşoğlu that although there are no disagreements on regional issues, the same cannot be said for Turkish-EU bilateral ties.

Responding to criticism over Turkey's anti-terror operations, he further said: "If we do not differentiate democratic opposition from those supporting terrorism, then that's where the problem begins. You should identify this well."

Çavuşoğlu said the EU's failure to recognize the FETÖ as a terrorist group meant it saw every step by the Turkish government as a violation of the law.

He said Taner Kılıç, chairman of Amnesty International Turkey -- and currently in detention -- had communicated with senior FETÖ figures abroad through the ByLock smartphone messaging app.

Çavuşoğlu said Kilic had been remanded in custody but that "does not mean Turkey is against Amnesty International; it is related with the person".

Kılıç was remanded in custody on June 10 in Izmir, western Turkey.

ByLock was allegedly used by FETÖ members during last year's coup attempt. The app is believed to have been cracked by Turkish security agencies, allowing them to identify tens of thousands of apparent FETÖ supporters.

In response to Daily Sabah's Brussels representative asking Mogherini if the EU will change its stance on the Gülenist Terror Group (FETÖ), which Ankara blames for the failed July 15 coup attempt, Mogherini said: "No, not at the moment… Taking such stance against the group requires all EU members' approval."

Çavuşoğlu also said that there is a crisis of trust between Turkey and the EU when it comes to sticking to the agreements and promises made. He added that Turkey has played its part in the refugee deal and that there are still promises Europe must fulfill.

Hahn highlighted the importance of Turkish-EU cooperation in dealing with the refugee and migrant crisis.

For his part, Çelik said Tuesday's discussions were "constructive."

"It's clear that we have differences, that we have disagreements, but dialogue, discussions and (the) search for settlements ... will of course continue," he added.

"The main backbone of Turkish-EU relations are the accession negotiations. … "We demand Chapters 23 and 24 be opened. Especially following the last negotiations, Turkey's constructive attitude was apparent. Turkey has concluded its preparations regarding these chapters, and political reasons should not block the process."

Çelik also said that the next summit will be held in Turkey's southern province of Adana.

Ankara has sharply cut the number of migrants crossing into Europe over the Aegean in exchange of 6 billion euros in financial aid for Syrian refugees and a promise of visa-free travel for Turkish nationals.

However, according to the European Commission, as of yesterday, the EU has spent only 826 million euros for Syrian refugees and has refused to provide visa-travel travel for Turkish nationals.

The migrant deal was especially welcomed by Germany, the preferred destination for most migrants and refugees.

Turkey's accession negotiations, cooperation in the fields of energy, economy, trade, and the fight against terrorism, the latest developments concerning migration, the visa liberalization process and the recent developments in regional issues were also discussed during the meeting.

An association agreement between the EU and Turkey began in 1963, when Turkey and the European Economic Community (EEC) signed the Ankara Agreement. It was aimed at Turkey's accession to the EEC and later paved the way for accession talks with the EU. Since negotiations began 54 years ago, only 16 policy chapters have been opened out of a total of 35.