Qatar's calm not weakness, but effort for dialogue, envoy says 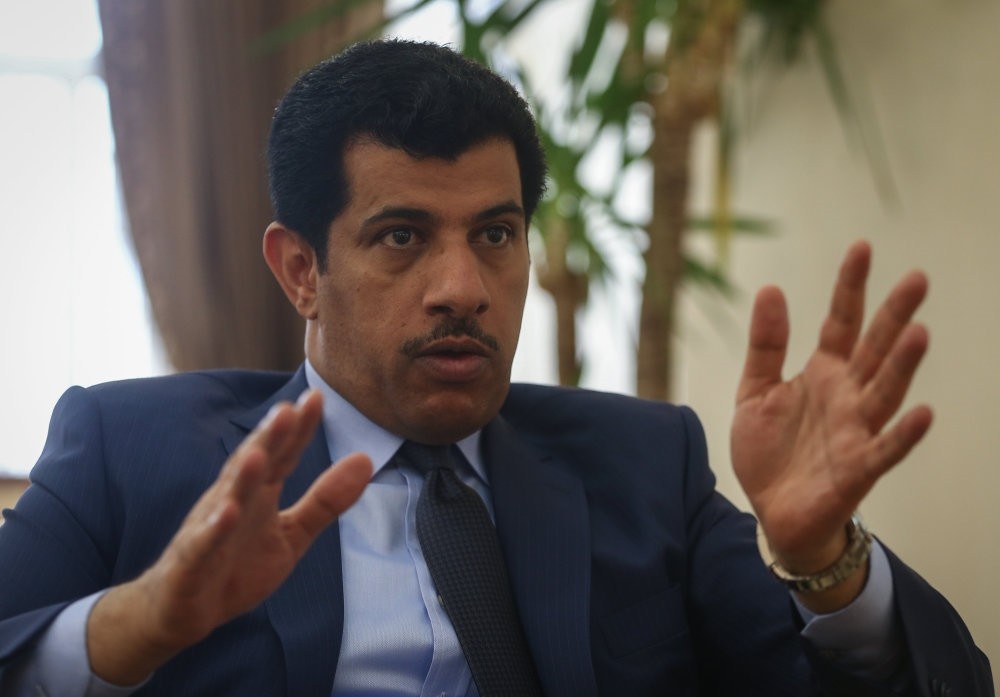 Qatari envoy Shafi said both Turkey and Qatar aim to work together for the future of the people in the region as well as security and stability.
by Ali Değermenci Jul 25, 2017 12:00 am

Acting in a calm and reasonable attitude in the face of a crisis should not be interpreted as weakness, but rather seen as a chance that is given to all parties to solve the crisis through dialogue, Qatari envoy to Ankara Salem Mubarak al-Shafi said in an interview published yesterday.

"Until this day, we are taking care of the crisis with a calm, reasonable attitude that tries not to escalate the tension. Yet, this attitude of ours should not be interpreted as weakness," Shafi said, adding that there are still no concrete reasons behind the crisis.

Speaking to the Takvim daily, Shafi expressed his gratitude to Turkey, explaining that they hope the states that are imposing an embargo on Qatar take Turkey's efforts into consideration.

President Recep Tayyip Erdoğan's visit to the Gulf states is compatible with Ankara's official stance that the crisis should be solved through dialogue, he said, adding that the states imposing the embargo should show their intention to solve the crisis, which they have failed to do up until now.

"There is no doubt that the views President Erdoğan will express during his visits will serve the cause of peace and stability in the region," Shafi said, calling the crisis "artificial."

"We still have many documents to defend us. However, we want to give the chance to end the crisis through dialogue and negotiations with all parties. This is the only way to solve the crisis," he said, emphasizing that Turkey's efforts are very important in this respect.

Highlighting the strategic relationship between Turkey and Qatar, Shafi said that it depends on mutual respect and brotherhood. "More than anything, we are very grateful to the Turkish government and public for their moral stance. This attitude shows the depth of the relationship between the two countries," he said, adding that Qatari authorities and Qataris in general appreciate it.

"We always aim to strengthen our cooperation and solidarity in crucial matters. We aim to work together for the future of the peoples of the region as well as security and stability. Yet for some, such policies are not welcomed. That's why they try to break it," Shafi added, indicating that despite everything, they should not be demoralized. "On the contrary, these kinds of efforts should motivate us even more to achieve our goals and study harder and faster to reach them."

He further said that the economic and commercial dimension of the bilateral relationship has increased. "There is no doubt that there has been a considerable increase in Turkish exports to Qatar, especially last month. Our efforts are for these developments to not be exceptional but be regular. That is why we are working on the research and application of the short and long term plans regarding the economic and commercial relations between the two countries," he said.

Regarding Turkey's military base in the country, Shafi said that the countries imposing the embargo do not have the right to demand shutting down a base from a foreign state, especially when they have many foreign bases in their home country. "We rejected their demands crisply. Since, as you know, this subject only interests two countries that are independent and have sovereignty over their territories."

The deal for deploying troops in Qatar, which is also expected to improve the country's military and boost military cooperation, was signed in April 2016 in the Gulf emirate's capital, Doha. The deal was approved by Parliament after a year.

Under the agreement, the militaries of the two countries will also be able to carry out joint exercises. According to Ankara, the move aims to contribute to regional and world peace. In addition to this, the Turkish gendarmerie will be able to train Qatar's gendarmerie forces under a deal between the two countries' Interior Ministries signed in December 2015.