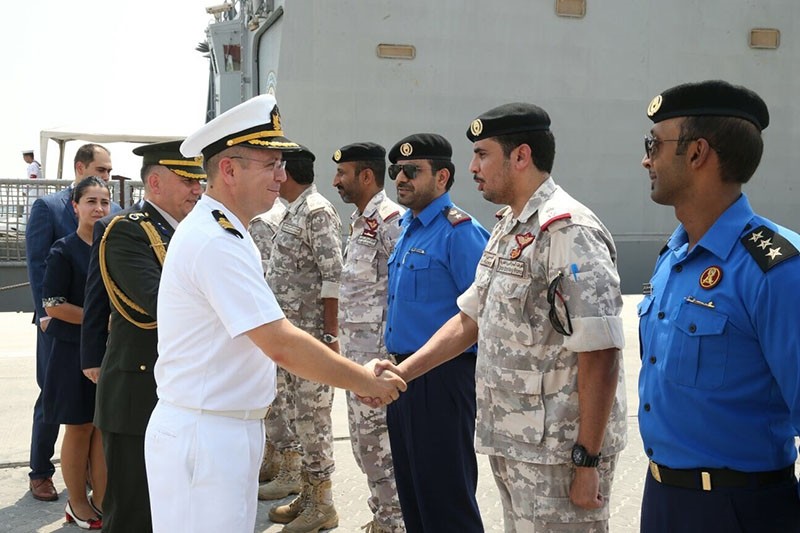 The Turkish and Qatari militaries started a joint exercise yesterday as the crisis between Qatar and Gulf countries continues. Over 250 Turkish soldiers and 30 armored vehicles are participating in the drill at a base in Qatar.

The Turkish Fleet Command's TCG Gökova Frigate arrived in Hamad Port, southeast of the capital Doha, on July 31, as part of the naval section of the drill. The Qatari Defense Ministry announced in a written statement that the TCG Gökova arrived in Qatar with a unit of 214 sailors to participate in the joint naval exercises.

The naval exercises are taking place in Hamad Port, Doha Naval Base and Qatari territorial waters. The exercises are conducted as part of military cooperation agreements between Turkey and Qatar in the fight against extremism and terrorism.

A bilateral agreement regarding the deployment of Turkish soldiers in Qatar was ratified in Parliament on June 7.

The aim of the joint military exercise is to strengthen coordination and cooperation between Turkey and Qatar, which are members of the anti-Daesh coalition.

Since the beginning of the Qatar row, Ankara has been calling on all sides to solve the issue through dialogue. The crisis began on June 5, when Saudi Arabia, the United Arab Emirates (UAE), Bahrain, Egypt and several other states cut off diplomatic ties with Qatar, accusing it of supporting terrorist groups. Qatari Emir Sheikh Tamim bin Hamad al-Thani strongly rejected the accusations and insisted that Qatar fights against terrorism relentlessly.

The bloc isolating Qatar issued a 13 point list of demands in order to lift the sanctions, including expelling the Turkish troops stationed in the country. Qatar rejected the demands, calling it interference in Qatar's sovereignty. Qatari Foreign Minister Mohammed bin Abdulrahman bin Jassim al-Thani said on July 31 that the crisis should be solved through diplomacy without touching Qatar's sovereignty and made it clear that Qatar will not accept any demands that are not in line with international law.