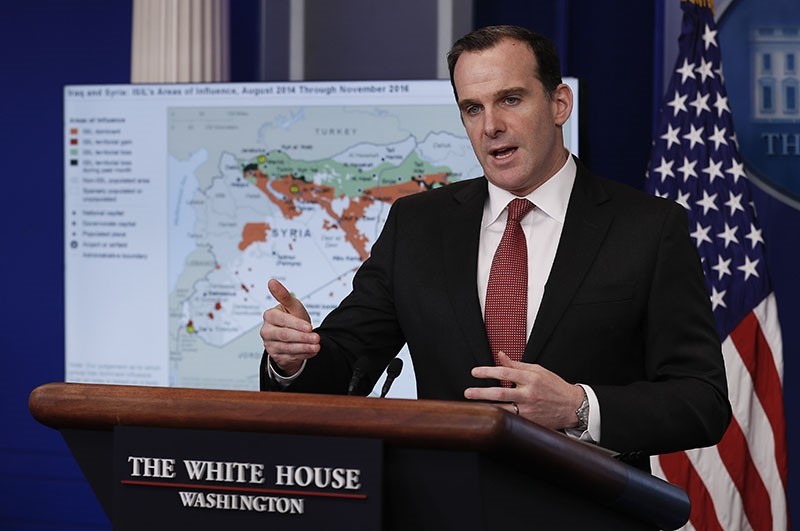 In this Dec. 13, 2016 file photo, Brett McGurk, White House envoy to the U.S.-led military coalition against the Daesh group, speaks about the conflict in Syria during the daily news briefing at the White House in Washington. (AP Photo)
by Ragıp Soylu Aug 02, 2017 12:00 am

A U.S. State Department official said Tuesday that U.S. Special Envoy Brett McGurk didn't blame Turkey for the increased al-Qaida presence in Idlib, Syria in his remarks at a panel last week. The statement came following an unusually strong rebuttal by the Turkish Foreign Ministry on McGurk's remarks over the weekend.

Last Thursday, McGurk, the de facto head of the counter-Daesh coalition, spoke at a 90-minute panel on counterterrorism threats confronting the U.S., in which the al-Qaida risk was also discussed. The American official said when the discussion turned to the Idlib province, McGurk emphasized the need to focus on al-Qaida with the same intensity they have with Daesh and shutting down the networks that fuel al-Qaida in Syria.

Turkish officials have a tense relationship with McGurk due to his field trips to Syria in which he met senior commanders of the People's Protection Units (YPG). Turkey, the U.S. and the EU have designated the YPG's parent organization, the PKK, a terror group. Many officials believe McGurk was very influential in the American decision to partner with the YPG against Daesh and emboldened the group.

These interactions have resulted in Ankara's careful analysis of McGurk's statements and interactions.

McGurk said last week during the panel that Idlib, located right on Turkey's border, has become the largest al-Qaida safe haven since 9/11. "But we have to ask a question: Why and how is Ayman al-Zawahiri's deputy finding his way to the Idlib Province. Why is this happening? How are they getting there? They are not paratroopers," asked McGurk at the event. McGurk also said some U.S. partners have taken an approach in the past and sent tens of thousands of weapons and looked the other way as the foreign fighters came into Syria. "Al-Qaida has taken full advantage of it," he added.

McGurk's remarks were widely considered as a veiled criticism of Ankara and provoked a formal Turkish protest among high level officials.

The American official said McGurk was clear during the panel and after concerning the fight against Daesh, emphasizing the U.S. and Turkey must work closely together to address the problem. "It is not a problem that Turkey should need to face on its own," the official added.

American officials regularly praise Turkey's contribution that has led to nearly stopping the flow of foreign fighters and obliterating the main route used by Daesh militants to conduct attacks in partner countries.