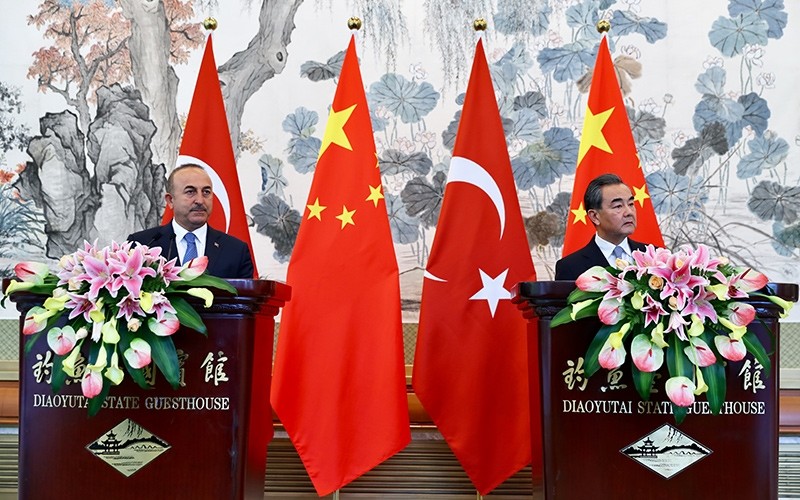 Foreign Minister Mevlüt Çavuşoğlu said on Aug. 3 that Turkey considers China's security as its own security and underlined that Turkey is looking to boost ties with China in the economy, education, tourism and culture. "We treat China's security as our own security," Çavuşoğlu said in Beijing during a joint press conference with his Chinese counterpart Wang Yi. "We absolutely will not allow any activities opposing or aimed against China within Turkey or its territories, and we will take measures to eliminate any media reports aimed against China," he added after his meeting with Chinese Foreign Minister Wang Yi that took place within the framework of the second meeting of the Turkey-China Foreign Ministers' Consultation Mechanism.

Foreign Minister Çavuşoğlu touched on boosting ties with China in education, tourism and culture by saying, "We hope that Chinese tourist numbers will increase. We expect 3 million of the 100 million Chinese tourists going abroad every year to come to Turkey." Emphasizing that there are important projects that the two countries can work together on, Çavuşoğlu said that Turkey and China will continue to work on Turkey's middle corridor initiative which will be an essential part of China's One Belt, One Road project. "We would like to accomplish the Edirne-Kars high-speed railway project and the third nuclear power plant project with China," he added.

Underlining that Turkish and Chinese foreign policy overlap in many areas, Çavuşoğlu also expressed Turkey's appreciation for China's support to end the Syrian Civil War. Touching upon Turkey's relationship with the Shanghai Cooperation Organization, Çavuşoğlu stressed that Turkey already has a close relationship with various international organizations and the country is considering its relations with different organizations as complementary and not alternatives to existing memberships.

Chinese Foreign Minister Wang Yi on the other hand praised Turkey's continuous support to the "One China Policy" and added that the two countries need to show reciprocal support on critical issues. Underlining that they share the same views with Çavuşoğlu on strengthening cooperation in the fight against terrorism and protecting mutual security in line with the mutual interests of the two countries, Wang added that "China will relentlessly support Turkey's efforts in maintaining its sovereignty, stability and security. We hope Turkey will participate more actively in international issues as an essential party in the international society."

In recent years, Turkey-China relations have gathered new momentum. President Recep Tayyip Erdoğan and China's President Xi Jinping have held four bilateral meetings since 2015. President Erdoğan last paid a visit to China this May when he attended the One Belt, One Road (OBOR) Forum and held bilateral talks with President Xi.

After China, Minister Çavuşoğlu will travel to Manila, the capital of the Philippines, where he will participate in a series of meetings held as part of the 50th Association of Southeast Asian Nations (ASEAN) Foreign Ministers' Meeting, which will be attended by 26 countries.

Although not a member of the 10-country bloc, Turkey formed ties with ASEAN in 1999, attended its first summit in 2013 and has applied for ASEAN partnership.