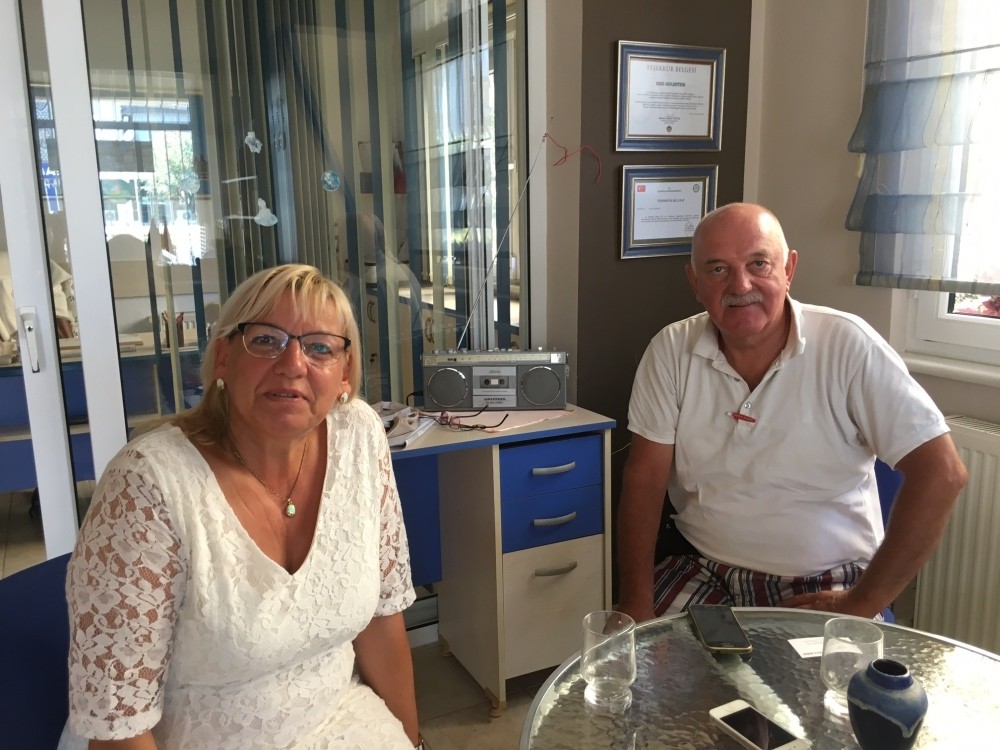 Germans living in Turkey's coastal Alanya district, sometimes called ‘little Germany,' said they have happily lived for many years in Turkey and say they want a solution in the row between their first and second homes

Despite recent political tensions between NATO allies, Turkey and Germany, many Germans living in Turkey's coastal town of Alanya, which is known for having a large German population, say they are happy to call it home and want the political imbroglio to end soon.

Almost all hotels in Alanya are overbooked and the beaches are packed, and German speakers are ubiquitous. Before the start of summer, it was assumed that the tense relations between Germany and Turkey would have an effect on the tourism industry, but this does not seem to be the case.

Alanya is also sometimes called "little Germany" in reference to the many residents and vacationers from Germany. Many feel Turkey to be their second home.

Daily Sabah took a short trip to the popular holiday resort on the Turkish Riviera to learn more about the life and stories of Germans in Alanya. We first met the couple Ines and Mathias Goldstein. They are the owners of Garaj ve Teknik Center hardware store in the Oba district.

The Goldsteins took their first vacation to Turkey in 1992. "In front of you is the sea and sun, behind you the mountains and snow", Mrs. Goldstein, 55, said. "We liked it so much that we came on our Easter holiday in '93, '93 and '95. Turkey was a very child-loving country and as a woman it was particularly good, because you could go shopping until midnight." Their decision to settle in Turkey happened as a result of fate, Mathias, 64, explained: "I had changed my job in 1995, and my boss wanted to open a branch in Istanbul and offered me the position as manager." When he received this news, the couple was in Alanya on vacation. "Only five days later I decided to move to Turkey.

"Turkey is our home. If someone gave me the same offer, I would answer yes again. I am very happy to have made this decision."

After a five-year career in Istanbul, they both decided to open their own business. "Alanya was an ideal place for this, because there was a big market gap and we would be living in a place where others go on vacation." Apart from that, Alanya is a "very clean" city, they said.

Today, their business is very well-known and appreciated in Alanya and along Mediterranean coast. They both speak Turkish very well.

"When it is time to retire, we definitely plan to travel all over Turkey," Mr. Goldstein said.

"The work is a lot of fun, but there is also a life without work. Turkey is a very rich country and there is still much to see," Mrs. Goldstein added.

Mrs. Goldstein would love to have the tense relations between their homeland and Turkey to be ironed out: "The people want peace, peace all around the world. There is nothing that politicians in the world cannot solve."

Mr. Goldstein said: "An acquaintance was recently in Turkey for his holiday. During his stay, he was constantly receiving calls from family members in German, asking if they were safe." This was "completely banal and absolute nonsense." For them, neither the attacks, nor the coup attempt had changed anything. "We continue to spend our time peacefully and are absolutely safe and feel good here."

Mrs. Goldstein flew back from Germany on Saturday and spoke of the safety precautions at European airports: "When I am at the airport in Alanya, my suitcase is checked right at the entrance, but I don't see the same security measures in Paderborn or in Frankfurt or Dortmund." She said instead of criticizing something in Turkey," they should clean up in front of their own door." 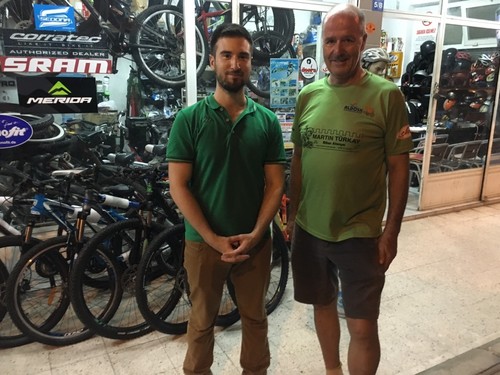 Our next stop was bike rental Martin Türkay where we met with the owner, Martin Bernhard, 54. "Everybody thinks that I am Martin Türkay due to the name of the shop", he said. He came from Herge, North Rhine-Westpahalia and has been living in Alanya since 1992, so he no longer calls himself a foreigner and affirms: "I am one of them because I am active in the sports club and I participate in public life. I love the city very much." 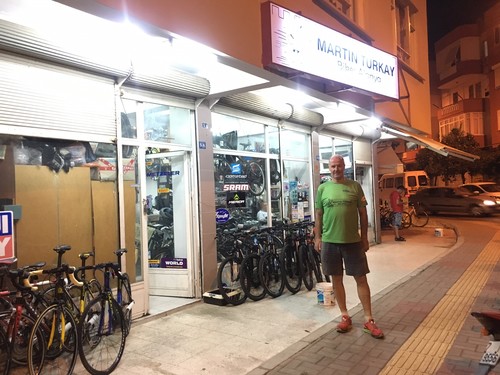 Bernhard used to be a postal worker when he was living in Germany. Driven by everyday stress and dissatisfaction, he decided to make the most important step in his life. "When I came to Turkey in 1989, I fell in love with the country. Then I went to a Turkish course in Germany, where I learned basic language skills, and was ready to move to Turkey.

Hundreds of medals decorate the shop

The 54-year-old sports enthusiast, who has won hundreds of medals and trophies in professional cycling contests during his time in Turkey, knew that it would not be easy to open a shop in a foreign country, but he dared to make the move and is now proud of it.

When asked, if he had ever thought about going back, he said: "No, because I have no desire to give up what I have built up in Turkey. With my move to Turkey, I got the opportunity to decorate my shop with several trophies and medals.

Bernhard said he won the Turkish Triathlon Championship in 2015, defended his title in 2016 and won the competition again in 2016.

Collect your stuff and come to Turkey, architect says

After that meeting we met with Theresa Fischer in a famous restaurant. The 43-year-old architect has lived in Alanya for 10 years. She said that she works as a freelance architect from home. Today was her last day in the vacation city, because the following day she would travel to Germany until the end of October. "To cool down from the hot days, I have to say goodbye to Alanya every year at the same time," Fischer said. She especially likes the climate in Turkey in winter, spring and autumn. "All my friends envy me and say this again and again. I always make the same suggestion: Collect your stuff and come to Turkey." 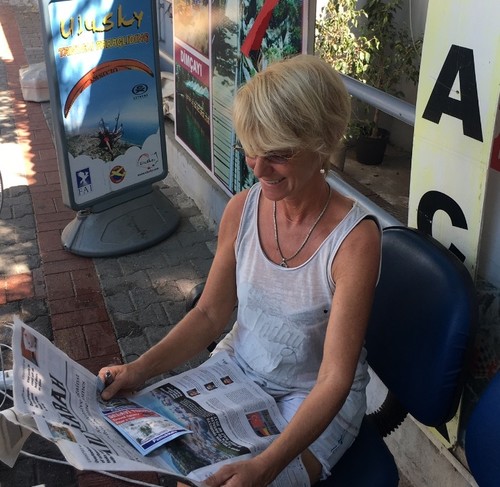 'My heart feels at home in Alanya'

Fifty-three-year-old Wuppertaler Tina Niewersch, opens her travel agency, where she has been working for about two years, in the early morning hours. There they organize boat and rafting tours as well as jeep outings for tourists.

"It was the first time that I came to Alanya as a holidaymaker, in just a few days I decided to move and get old here," she said about her first trip to Turkey. "My heart feels at home, as if I were at home, and I love the mentality"

She is firmly convinced that she wants to spend her life in Turkey and does not want to return to Germany any more. Even the tense relations with her home country and the terrorist attacks that have taken place in recent years are not frightening for her: "It is clear that many Germans are afraid, and it is also clear that this fear has reduced the number of tourists. However, I think it is less dangerous in Turkey than in Germany. There is terrorism all over the world, I want peace. "

Germany and Turkey need a cooperation

"There are two countries that have built up a big friendship over the past 60 years, I want this to continue. Turkish citizen should also be able to enter Germany without a visa, so Turks would also get to know German culture more closely," she said.