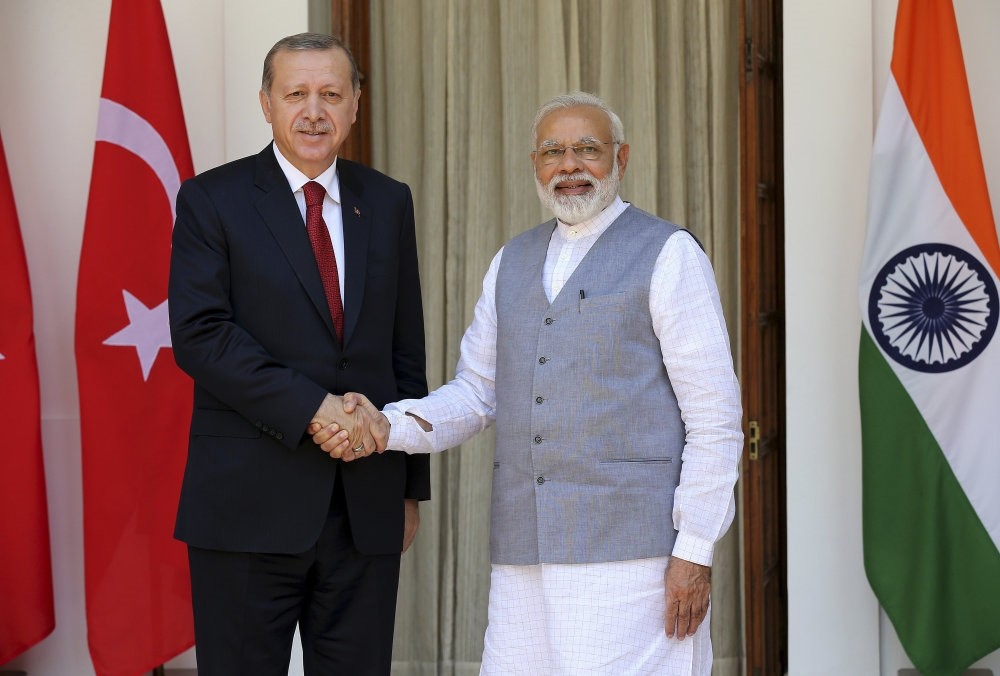 Turkish President Recep Tayyip Erdou011fan (L) and Indian Prime Minister Narendra Modi (R) shake hands upon their arrival at Hyderabad House prior to their meeting in New Delhi, India, May 1 2017.
by Yunus Paksoy Aug 05, 2017 12:00 am

Turkey and India are deepening their ties in the defense industry as Ankara plans to get closer to several regional and world powers to boost its military power. The country recently reached an agreement with Russia and the Italy-France consortium for defense systems, and is also in talks with China and Pakistan

India is willing to expand military cooperation with the Turkish Armed Forces (TSK) and deepen ties in the defense industry, a high-level military official in Ankara told Daily Sabah.

As Turkey has been diversifying its options regardingmilitary cooperation and the defense industry with several major regional and world powers, a senior Indian military official said the Indian army remains ready and prepared to forge better and stronger military ties with the TSK.

Stressing that political differences of opinion may be put aside and the two countries can focus on collaborating on military issues, the high-level official said both the Turkish and Indian militaries need it. "Turkey signs military cooperation deals and conducts joint drills with different countries. Political issues should not put a dent in the way of Turkey's military cooperation with India," the senior official said.

Daily Sabah has also learned that a group of Indian military students will arrive in Turkey in the upcoming months as part of a joint program with the Turkish military.

The Indian government has been pursuing an aim of boosting arms expenditure and investing in the indigenous defense industry as well as arms export. Indian Prime Minister Narendra Modi's government plans to export weapon systems worth over $2 billion by the end of 2019.

The senior military official stressed that the Indian government expects Ankara to realize a bilateral military agreement that was signed over 20 years ago. The official said the bilateral agreement has been on hold since then. Ankara and New Delhi underline their commitment to fight against terrorism as well. "Turkey is in full solidarity with India in their fight against terrorism. The aim of terrorist organizations is to discourage. … It is not important how much effort they make, terrorists will be certainly drowned in the blood they spill," President Recep Tayyip Erdoğan said in a joint press conference with Modi in May.

Ankara has been very active in getting in close contact with several regional and world powers in an effort to boost its military power and diversify its options in the defense industry. Recently, the Turkish government has announced that a deal with Russia over the purchase of the S-400 missile defense system has been agreed on.

Furthermore, Turkey has recently signed an agreement with Italian-French consortium EUROSAM to develop its national missile defense system. According to the deal, Turkish companies and EUROSAM will work together to produce SAMP/T Aster 30 long-range surface-to-air missile (SAM) systems, which are already in use in several NATO member countries.

Turkey seeks to assert military activity in the region as well. The Turkish and Qatari militaries started a joint exercise on July 31. Over 250 Turkish soldiers and 30 armored vehicles participate in the drill at a base in Qatar. The Turkish Fleet Command's TCG Gökova Frigate also arrived in Hamad Port, southeast of the capital Doha, as part of the naval section of the drill.

In addition, the TSK has set up a military base in Doha. The military base is aimed at enhancing bilateral relations and ensuring regional stability and peace, according to the two sides.

Ankara broadens military cooperation with China as well. The Turkish army and the Chinese People's Liberation Army are going to have a high-level dialogue meeting in Ankara before the end of this year, Zheng Qinli, China's military attaché to Ankara announced on July 28.