Russia more aware of Turkey's concerns on YPG than US, Ankara says 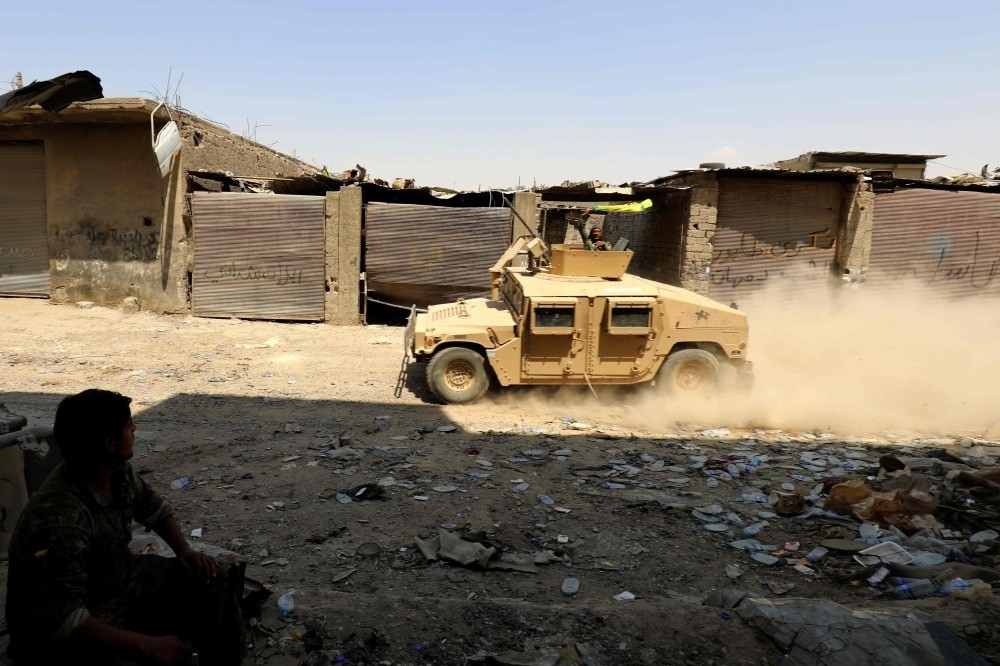 A militant from the U.S.-backed SDF waves a YPG from an armored vehicle driving through the eastern al-Sanaa neighborhood, Raqqa, on the edge of the old city, Aug. 13.
by Daily Sabah Aug 17, 2017 12:00 am

Ankara has reiterated its concern over U.S. military support to the PKK's Syrian affiliate YPG and highlighting that Russia better acknowledges its concerns over the group's activities in Syria

Commenting on the recent developments in Syria in a televised interview Wednesday, Foreign Minister Mevlüt Çavuşoğlu asserted that Russia better understands Ankara's sensitivities concerning the PKK-affiliated People's Protection Units (YPG) and Russia has so far not been observed to provide any kind of weaponry to the YPG. He also said that Russian Chief of Staff Valery Gerasimov would visit Turkey in the future to discuss regional issues. Asserting that Turkey is taking steps in line with its allies in the fight against Daesh, Çavuşoğlu said: "It is a serious threat and danger for the future of Syria that the U.S., as one of our allies, provides weapons to the YPG."

U.S. support for the Syrian Democratic Forces (SDF), the majority of which is made up of YPG fighters, has been a major strain on relations between Washington and Ankara. Turkey considers the Democratic Union Party (PYD) and its armed wing the YPG to be the Syrian offshoots of the PKK, a proscribed terrorist organization in the U.S., Turkey and the EU. However, Washington has adamantly resisted similarly designating the PYD or YPG, using it as a principal partner in the fight on the ground against Daesh in northern Syria.
​
Çavuşoğlu stressed that Ankara does not approve of the U.S giving weapons to the YPG, reiterating that Ankara is resolute in countering this threat.

He said that the U.S is sending reports of the shipments of arms to the YPG each month. The latest report says only armored vehicles and equipment were provided to the YPG and not ammunition or weapons.

Saying that it is essential that the information is provided to Turkey, Çavuşoğlu explained that the main issue is the retrieval of the weapons. "Will you take back these weapons? There is a question on this issue" he said.

Previously, U.S. Secretary of Defense James Mattis said in a letter to his former Turkish counterpart Fikri Işık that the U.S. would retrieve the weapons it sends to the YPG for the assault on Raqqa once Daesh has been defeated. According to Defense Ministry sources, Mattis sent a letter to Işık in which he provided detailed information about the military materials and equipment provided to the YPG for the fight against Daesh in Raqqa.

In the letter, Mattis said that the U.S. was in tactical cooperation with the SDF, stressing that the U.S. has guaranteed transparency in this relationship.

Mattis stressed that Turkish-U.S. relations are based on a strategic partnership under the auspices of the common aim of fighting Daesh.

Çavuşoğlu claimed that strengthening these terrorist groups will put Syria's future at risk. "What does it mean for the future of Syria that instruments such as the YPG have been strengthened?" he asked.

"Turkey is trying to keep the Astana process alive. The main role of the Astana process is to end fighting on the ground, to help create stability and [maintain] de-escalation zones in the region. We have reached agreements on this issue, as well."

Çavuşoğlu said that Russia, the U.S. and Jordan have agreed on the status of the southwest of Syria while negotiations on Idlib continue. Russia continues to observe violations in the regions of East Ghouta and Homs with its own forces.

He said technical negotiations continue between Turkey, Russia and Iran. "After the de-escalation zones have been completely guaranteed, let's say a [by means of a] cease-fire, the political solution needs to be brought to the forefront. We say that the best solution is a political solution," he added.He said that the picture regarding Syria has become clearer, while emphasizing that Turkey is participating in all processes initiated for reaching peace and has always contributed to that process. He asserted that Idlib is essential for Turkey and the process has been handled both on the trilateral level with Russia and Iran and on the bilateral level with Russia. Previously, presidential spokesman İbrahim Kalın said that as part of the mechanism, Turkey and Russia could jointly deploy forces to Idlib, which is currently controlled by opposition groups.

Kalın said that Russia and Iran could also deploy forces to the Damascus area, controlled by the Assad regime whereas Jordan and the U.S. could deploy troops to the Daraa area in the south as part of a de-escalation zone plan formulated between Ankara, Moscow and Tehran in May.

"The Russians have a proposal: Perhaps a number of Kyrgyz or Kazakh troops could be deployed. They could also be involved in this task force," Kalın said.