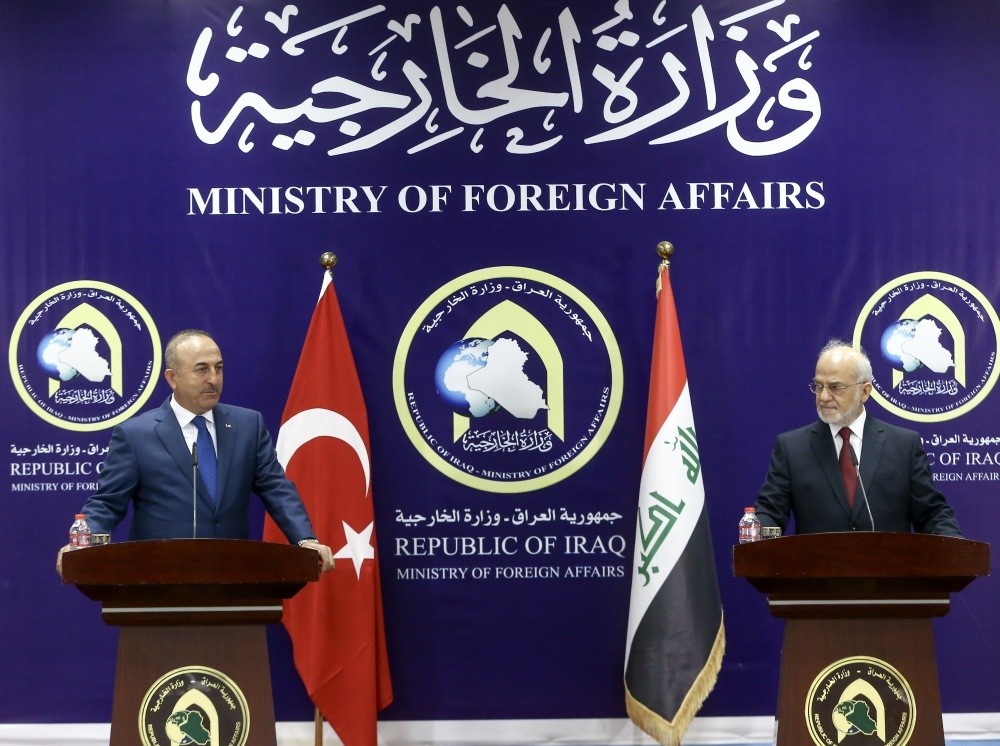 The KRG's planned referendum will cause harm to Iraq's territorial integrity in addition to further fueling tensions in the region, Foreign Minister Çavuşoğlu said during an official visit to Baghdad

Foreign Minister Mevlüt Çavuşoğlu has urged Iraq's Kurdistan Regional Government (KRG) to cancel the independence referendum that is scheduled for Sept. 25, stressing that Turkey hopes Irbil and Baghdad will resolve all issues through mutual understanding. "Our expectations of Irbil are quite plain and clear; this referendum decision should be cancelled," Foreign Minister Çavuşoğlu said during a joint press conference with his Iraqi counterpart Ibrahim al-Jaafari in Baghdad yesterday. Reiterating Turkey's full support for Iraq's unity and autonomy, Çavuşoğlu stressed that "unity and solidarity" is also in the best interest of the Kurds.

"We're here today to reiterate our support for Iraq's political integrity and sovereignty," he said, adding that Turkey hopes Irbil and Baghdad will resolve all issues through mutual cognizance. "Of course, it is important that Irbil's rights should be granted. We have always supported the KRG in the fight against Daesh but we also point out the wrong steps being taken by Irbil," he said, adding that Turkey will continue to lend its support to reconciliation efforts in Iraq. Minister Çavuşoğlu's visit comes amid ongoing tension between Irbil and Baghdad.

Ankara has voiced its concerns over the planned independence referendum and contended that the referendum's aftermath could cause further turmoil in the region.

However, prior to Çavuşoğlu's visit, KRG President Masoud Barzani dispelled rumors that Irbil might agree to postpone the referendum under the condition that Baghdad pays the salaries of Peshmerga forces or implements Article 140 of the constitution that addresses the issues of disputed areas. In addition to Ankara and the Iraqi central government, the EU, U.S., Russia and neighboring Iran have all raised concerns that the referendum could yield undesirable results.

Regarding the fight against terrorism in Iraq, Minister Çavuşoğlu said that Turkey will cooperate with Iraq to defeat the PKK terrorist organization in the country, reiterating the country's determined stance in the fight against Daesh. "We will work together to ensure that the PKK is defeated in Iraq," Çavuşoğlu said, emphasizing that the PKK poses the same threat as Daesh terrorists. He went on to reiterate that the PKK and Deash are common enemies of Turkey and Iraq, emphasizing the importance of peace and integrity in the region.

'Iraq ready to cooperate against PKK'

Meanwhile, Iraqi Foreign Minister Ibrahim Jaafari said that his country is ready to address the issue of the PKK terrorist organization in coordination with the concerned countries, saying: "Iraq is not allowing members of the organization to enter from abroad. Rather, security conditions [in the country] have allowed them to settle in our territory." Minister Jaafari went on to say, "We will not allow Iraq to be turned into a conflict zone," adding that Baghdad is ready to launch an initiative "to deal with the PKK problem in coordination with concerned countries while not violating Iraq's sovereignty."

Touching upon the ongoing anti-Daesh operation in Tal Afar, which is a predominantly Turkmen city, Çavuşoğlu said that Turkey expects Iraq to protect the Turkmens and their ethnic identity in Tal Afar. He also praised the efforts of the Iraqi army in recapturing the northwestern city of Tal Afar from Daesh, saying Turkey will continue supporting Baghdad against the terror group.

Amid aims to train the local forces in their fight against Daesh, Turkey established a military base in the town of Bashiqa, near Mosul, in March 2015. Around 150 soldiers and nearly 25 tanks have been stationed in Bashiqa to protect Turkish servicemen as they train Iraqi volunteers to fight Daesh. Last year, the status of the Bashiqa camp became an issue of contention between Ankara and Baghdad which was eventually resolved as both sides agreed to solve the problem when the entire region is cleared of Daesh terrorists. Responding to a question regarding the Bashiqa camp, Minister Çavuşoğlu said that those who were trained by Turkish forces in the Bashiqa camp have fought against Daesh and taken an active role in the military operation against Daesh for the liberation of Mosul. He also said that the future of the Bashiqa camp will be jointly decided upon and representatives from both countries are engaged in ongoing talks on the matter. "Special representatives are engaged in ongoing talks regarding the technicalities of the issue," the foreign minister noted.

Çavuşoğlu also stated that Turkey will contribute to the rebuilding of Iraqi cities, particularly Mosul, saying: "We will encourage our businessmen to invest in this region." He went on to stress that Turkey wants to cooperate further with Iraq, adding that Ankara wants to double its trade volume with Baghdad.

During his visit, Çavuşoğlu also met with Iraqi President Fuad Masum and Prime Minister Haider al-Abadi in Baghdad on Aug. 23. Following the meetings in Baghdad, Çavuşoğlu moved to the KRG's capital city of Irbil to meet with KRG officials, including President Barzani, where Çavuşoğlu reportedly expressed Turkey's concerns regarding the independence

referendum once again while stressing that Iraqi Kurds would not benefit from a possible independence decision.