Erdoğan slams US, calls indictment of Turkish guards a scandal 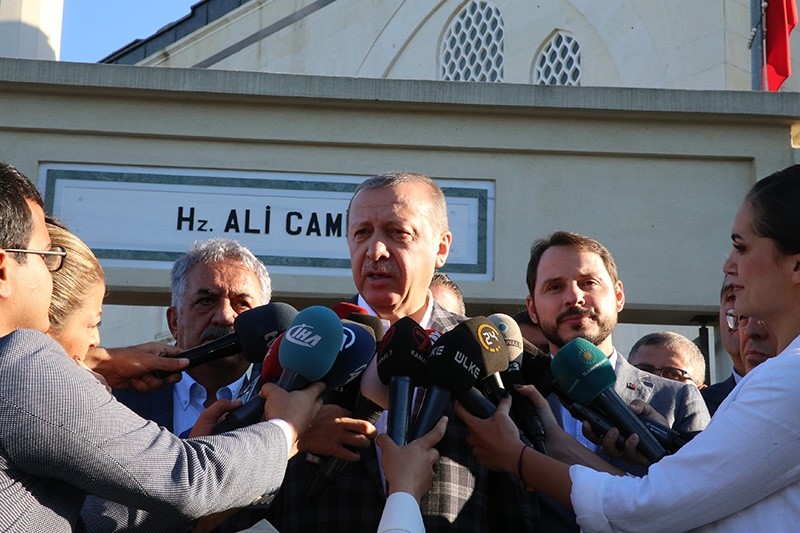 President Recep Tayyip Erdou011fan speaks to reporters after prayers for the Qurban Bayram in Istanbul, Turkey September 1, 2017. (Presidential Photo Service via AA)
by Compiled from Wire Services Sep 01, 2017 12:00 am

President Recep Tayyip Erdoğan blasted the U.S. justice system on Friday, saying it was a "scandal" that his security guards are facing indictments in Washington, D.C. over a brawl with protesters in May, when he visited the capital.

The indictments against 19 people stem from an incident during Erdoğan's trip to meet US President Donald Trump. The U.S. prosecutor claims the guards and Erdoğan supporters assaulted peaceful Kurdish protesters, although footage from the scene shows otherwise. The Washington police chief also described it as a brutal attack on peaceful protesters.

15 of 19 people identified as Turkish security guards were charged 'over their roles in violence' on May 16.

"This is a clear scandalous expression of how the justice system works in America," Erdoğan told reporters after prayers for Qurban Bayram (Feast of the Sacrifice), also known as Eid al-Adha, saying the protesters were members of the PKK, which is also a terrorist designated group in the U.S.

"I am having trouble understanding what the United States is trying to do with all these developments."

The Turkish president also said the charges stemmed from a prosecutor who is a holdover from Barack Obama's time as president.

Ankara blames FETÖ for last year's coup attempt in which 250 people were killed and over 2,200 were injured. Washington has not extradited FETÖ leader Fetullah Gülen, who lives in a self-imposed exile in Pennsylvania, saying Turkey has not provided enough evidence against him.

Erdoğan added that he would meet U.S. President Donald Trump separately on the issue if he gets a chance during his next visit.

The May 16 skirmish, caught on video, injured 11 people outside the Turkish ambassador's residence and further strained bilateral ties at a time when the NATO allies are in sharp disagreement over policy in Syria.

The charges against some members of Erdoğan's security detail sent a clear message that the United States "does not tolerate individuals who use intimidation and violence to stifle freedom of speech and legitimate political expression," U.S. Secretary of State Rex Tillerson said in a statement.

The incident sparked outrage on Capitol Hill, prompting even senators and lawmakers with pro-Turkey stance to issue angry protests.

Upon the indictment, the Turkish Foreign Ministry also released a statement Wednesday, calling the decision "biased, unfounded and purely political," and reiterating that the incident that took place outside the Turkish embassy on May 16, 2017 in Washington was caused by the negligence of U.S. authorities.

The two countries previously exchanged diplomatic notes and summoned envoys over the issue.

On May 16, the first fight reportedly broke out at the Turkish embassy when PKK supporters threw water bottles at Turkish citizens, triggering a 10-to-15 second scuffle in the middle of the road. Only two police officers interceded in the fight and it was clear the police were not ready, as there were only around 10 police officers outside the embassy.