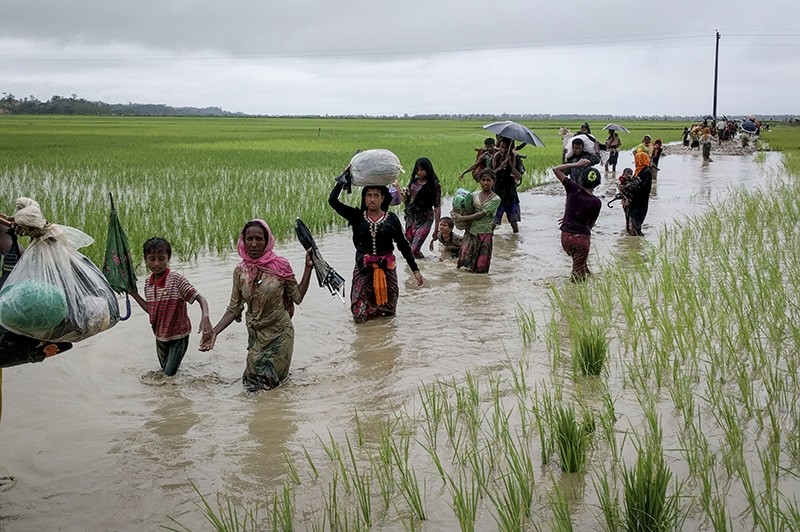 The suffering of tens of thousands of Rohingya Muslims fleeing the clashes in Myanmar's Rakhine State and subsequent army was the top issue addressed by Turkish politicians in their messages after attending prayers for Qurban Bayram (Feast of the Sacrifice), also known as Eid al-Adha.

Speaking to media in Istanbul on Friday at the first day of the Eid al-Adha, President Recep Tayyip Erdoğan stated that hundreds of Rohinghya Muslims were killed, their villages were burnt and 20,000 stranded people have been crossing into Bangladesh by leaving their homes behind.

"All of these are happening in front of eyes of all humankind but unfortunately humankind is insensitive to them," he said.

"I, as the rotating president of the Organization of the Islamic Cooperation, held necessary talks with leaders of the Islamic countries and UN Secretary General [Antonio] Guterres as well."

He said that Muslim world is saddened while marking Eid al-Adha because of violence in Myanmar, conflicts in Syria and Iraq, and fight against terrorism in Turkey.

"International community should be more active and should abandon different [double] standards on this subject," Yıldırım told reporters in Istanbul on the first day of Eid Al-Adha.

Turkey has been doing its part to send humanitarian aid to the suffering people and in order to put an end to violence, he said.

"We, one more time strongly condemn this massacre… ," the prime minister said, adding "Those, who have done this [violence], will be accountable before the humanity sooner or later."

The other ministers' Eid messages also focused on the ongoing violence.

Speaking to reporters in northwestern Kocaeli province, another Deputy Prime Minister Fikri Işık said that it is unacceptable that the world is "unfortunately blind and deaf to these persecutions."

"We've seen that all the calls made by particularly our president and prime minister have been responded by the international community," he said, adding that he hopes the crisis there would be resolved permanently.

Meanwhile, Foreign Minister Mevlüt Çavuşoğlu said he has spoken to his counterparts in many countries and representatives of international organizations over the crisis.

"I am also going to speak to Kofi Annan, special envoy of the United Nations, today," he told reporters in southern province of Antalya. "We, as Turkey, will do whatever it needs in order to find a permanent solution in Rakhine."

"Our state and nation will continue to extend a helping hand to people suffering in every region of the world -- from Rakhine to Pakistan, from Syria to Somalia, from Serbia to Palestine," Defense Minister Nurettin Canikli said in his written message released for the occasion of the Eid.

Violence erupted in Myanmar's Rakhine State on Aug. 25 when the country's security forces launched an operation against Rohingya Muslim community following an armed attack on security forces. It triggered a fresh influx of refugees towards neighboring Bangladesh though the country sealed off its border for the refugees.

A security clampdown launched in October last year in Maungdaw, where Rohingya form the majority, led to a UN report on human rights violations by security forces that indicated crimes against humanity.

The UN documented mass gang-rape, killings -- including that of babies and young children -- brutal beatings and disappearances. Rohingya representatives have said approximately 400 people were slain during the operation.