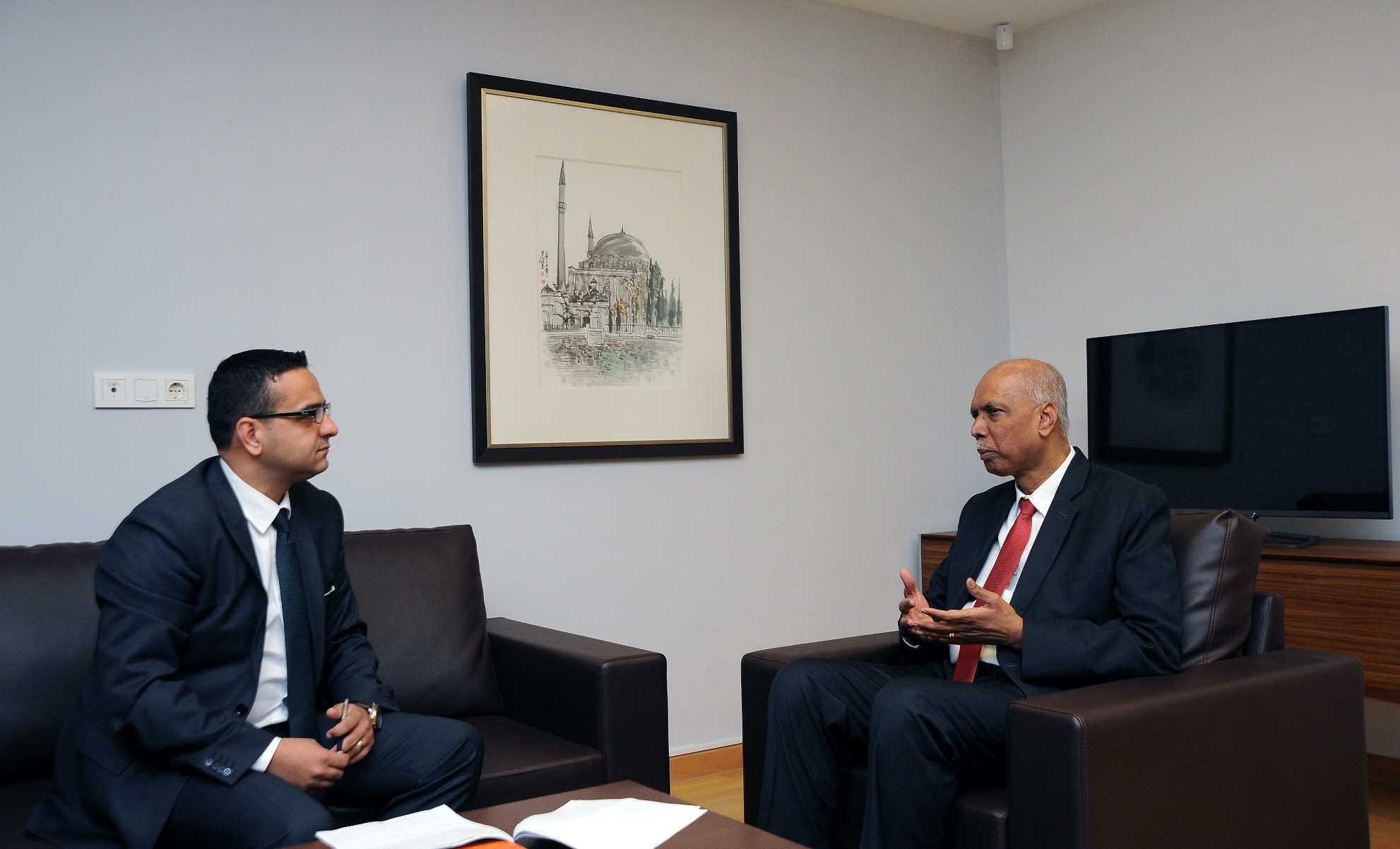 Ambassador Selverajah (R) said that Turkey and Singapore share common priorities for development, in areas such as infrastructure, healthcare, fintech and e-commerce.
by Ali Ünal Sep 05, 2017 12:00 am

Situated at the crossroads of major trade routes, Turkey and Singapore serve as gateways to their respective regions. This will benefit the new Turkey-Singapore Free Trade Agreement deal that will come into effect on Oct. 1, Ambassador Selverajah said

Singaporean Ambassador to Ankara A. Selverajah said that Prime Minister Binali Yıldırım's recent visit to the country is a strong reaffirmation of the importance that both countries attach to bilateral relations and added that the two nations are now looking ahead to the 50th anniversary of their bilateral relations, which will be celebrated in 2019.

With the free trade agreement (FTA) between Turkey and Singapore is coming into effect in October, the ambassador said they look forward to deepening economic ties when it enters into force.

Providing information about Singapore's priorities in 2018, the Ambassador said that as ASEAN chair, Singapore will continue to advocate and prioritize economic openness and integration.

The Singaporean envoy also expressed his confidence that the Turkish people will continue to safeguard the principles and institutions of democracy that constitute the foundation for Turkey's stability and success.

Daily Sabah: How do you evaluate the Turkish prime minister's recent visit to Singapore? What was the significance of the visit from your perspective?

A. Selverajah: We were deeply honored that Prime Minister Binali Yıldırım chose to visit Singapore as part of his first trip to East Asia as prime minister and I believe that the visit is a strong reaffirmation of the importance that both countries attach to our bilateral relations. We were indeed happy to welcome Prime Minister Yildirim nine years after his last visit to Singapore in 2008 as the then-transport minister of Turkey, and to update him on the latest developments in Singapore.

The prime minister's visit is the latest in a series of high-level exchanges, which includes the official visit by Singapore Prime Minister Lee Hsien Loong's official visit to Turkey in 2014 and his participation at the G-20 Summit in Antalya in 2015.

In addition, they exchanged views on key developments in our respective regions, including the global fight against terrorism. Prime Minister Yıldırım also gave a well-received speech at the 41st Singapore Lecture and interacted with key Singapore business leaders during the 5th Turkey-Singapore Business Forum.

I believe that Turkey and Singapore share many commonalities despite our differences in size. Turkey is situated at the crossroads of Asia and Europe while Singapore sits between the Pacific and Indian Oceans. Both countries therefore serve as a gateway to their respective regions and we both benefit from free and open trade. I am therefore happy that the completion of the ratification process for the Turkey-Singapore Free Trade Agreement (TRSFTA) that was announced during Prime Minister Yıldırım's visit and the TRSFTA will come into force on Oct. 1, 2017.

The TRSFTA and the Declaration on a Strategic Partnership signed in 2014 are two important platforms that will help advance our relationship moving forward.

DS: The Free Trade Agreement between Turkey and Singapore is coming into effect in October. What would be its impact on our trade relations?

A.S.: Turkey and Singapore have enjoyed strong bilateral ties and the Turkey Singapore Free Trade Agreement continues to build on those ties. Both Turkey and Singapore occupy strategic locations in our respective regions and can act as springboards for our companies to explore and tap business opportunities across our respective regions. We look forward to deepening economic ties when the TRSFTA enters into force.

DS: In recent years, there has been a growing interest of Singaporean investors to Turkey. How can Turkey attract more Foreign Direct Investment (FDI) from Singapore?

A.S.: Singapore has had a number of successful investments in Turkey, such as the Mersin International Port. Our companies are doing well in sectors such as urban infrastructure, healthcare, and hospitality. More Singaporean companies and investors have recognized Turkey's potential, and are keen to learn more about the specific opportunities available. Trade connectivity and the ease of doing business are important considerations for our companies.

The TRSFTA is a step in the right direction, and more can be done to help Singapore companies gain a better understanding of Turkey and its business environment. It would also be important for our businesses to be able to work with a local partner in Turkey. This would help to reduce the learning curve for Singapore companies.

DS: Currently our trade volume is over $1 billion, however, the Turkish and Singaporean prime ministers are set to target $2 billion trade volume until end of 2018. From your point of view which sectors have more potential for further cooperation?

Turkey and Singapore share some common priorities for development, in areas such as infrastructure, healthcare, fintech and e-commerce. These are areas in which Singapore companies have expertise and a good track record globally, and I am confident that they can contribute to Turkey's growth and development.

The TRSFTA, as a comprehensive agreement, will also allow progress in the consumer sectors. With the reduced tariffs, we see potential for increased trade in food, electronics and even furniture products.

DS:While Turkey continues to build a third airport in Istanbul, which will be one of the biggest in the world, at the same time Singapore is building a fifth terminal at Changi Airport. From this perspective, how can Turkey and Singapore cooperate further in the aviation sector?

A.S.: Istanbul and Singapore are important air hubs for and gateways to our respective regions. Air passenger traffic between Turkey and Singapore has been growing at an 8 percent compounded annual growth rate between 2013 and 2016. Our respective airlines, Turkish Airlines and Singapore Airlines, have also been deepening their cooperation over the years.

The new airport infrastructures in Turkey and Singapore will provide opportunities for our hubs and airlines to work even closer together, and further enhance air connectivity between and beyond both countries. They can tap into the strong air traffic demand in our respective regions. And further liberalization of air services will support growth in bilateral trade, investments and tourism. It will also bring more traffic to both our air hubs, and help realize their full potential.

In August, Turkey became a sectoral dialogue partner for ASEAN. How would Turkey's engagement with ASEAN contribute to relations with Singapore?

Singapore will assume the ASEAN chairmanship in 2018. What will be Singapore's priorities during its chairmanship?

Singapore looks forward to delivering a substantive, meaningful and forward-looking chairmanship in 2018. Amidst the increasing geopolitical complexities, it is important for ASEAN to remain united and resilient to challenges. In this regard, Singapore as the ASEAN Chair in 2018 will continue to focus on keeping the regional bloc relevant and central. Further, given the challenges of the Fourth Industrial Revolution, Singapore will continue to advocate and prioritize economic openness and integration. We will look for ways to ride on the digital revolution and new economic trends such as e-commerce, and build on our cyber capabilities and develop smart cities to bring tangible benefits to the people of ASEAN.

Community building within ASEAN will also remain a priority as we hope to raise awareness of ASEAN and strengthen ASEAN unity among our people. To this end, Singapore will work closely with fellow ASEAN member states to develop human capital, and create various initiatives and programs to foster greater interaction and intercultural understanding, especially among the youth in our region.

In recent months Turkey's leading conglomerates, Aksoy Holding, launched cooperative efforts with Surbana Jurong to establish a petrochemical industrial park between the southeastern provinces of Diyarbakır and Şanlıurfa. What is the latest about this project? Could you provide more information please?

The parties are still in discussion. I believe that the Turkish prime minister and his delegation had better first hand appreciation of the concept and facilities on Jurong Island which they visited during their stay in Singapore. We hope that this concept could also be applied successfully in Turkey.

I will always remember the resilience and courage demonstrated by the Turkish people in standing up to the coup plotters. The leadership shown by the president, the Cabinet, and parliamentarians across party lines in the immediate aftermath of the attempted coup was also remarkable.

I am confident that the unwavering fortitude demonstrated by the Turkish people on the night of July 15 will go a long way in helping the nation heal from the trauma of the attempted coup even as we remember the 249 brave Turkish citizens who gave their lives in the defense of democracy.

It is my sincerest hope that the days of coup d'états in Turkey are over and never again will we see tanks pointing at civilians or fighter jets swooping over homes. Such incidents have no place in a modern, democratic, and developed country like Turkey. I am confident that the Turkish people will continue to safeguard the principles and institutions of democracy that constitute the foundation for Turkey's stability and success.

Turkey and Singapore have developed a strong and resilient partnership in recent years. This was achieved by strong political will at the highest level on both sides, especially by President Recep Tayyip Erdogan and Prime Minister Lee Hsien Loong, to provide a new impetus to our relationship. This effort has borne fruits in a short time in the form of the TRSFTA and the Declaration on a Strategic Partnership.

Going forward, there is much that our two countries can do together to bring our relationship to a new higher plane. As the first resident Ambassador of Singapore to Turkey, I intend to do my part, together with my colleagues at the embassy, to strengthen this partnership and help lay the foundation to broaden and deepen our cooperation in the coming years. We look forward to celebrating 50 years of Turkey-Singapore diplomatic relations in 2019 on a very high note.