FM Çavuşoğlu to travel to Bangladesh to discuss Rohingya 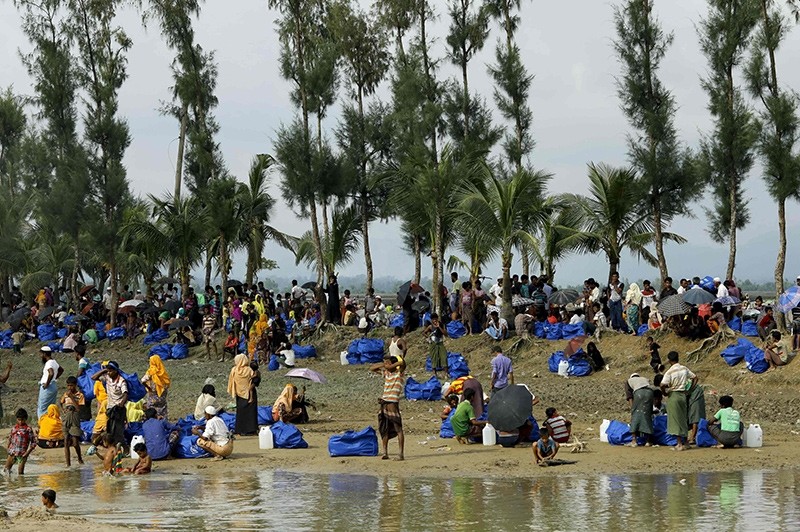 Displaced Rohingya refugees from Rakhine state in Myanmar rest near Ukhia, at the border between Bangladesh and Myanmar, as they flee violence on September 4, 2017 (AFP Photo)
by Daily Sabah Sep 05, 2017 12:00 am

Çavuşoğlu spoke with his Bangladeshi counterpart Abul Hassan Mahmud Ali on the phone and discussed latest developments regarding the humanitarian situation.

He will travel from Baku to Bangladesh late Wednesday, diplomatic sources added.

Çavuşoğlu will also visit a refugee camp in Cox's Bazar, southern Bangladesh, near the border with Myanmar.

According to Presidential Spokesperson Ibrahim Kalın announced Tuesday that a delegation, which will include Foreign Minister Mevlüt Çavuşoğlu and Turkish Cooperation and Coordination Agency (TIKA) President Serdar Çam, will personally visit Rohingya the camps near Cox's Bazaar in Bangladesh to deliver aid containing food, medical supplies and ambulances, adding that Turkey will deliver aid to 100,000 families.

The Turkish foreign minister has been involved in intense phone diplomacy and has spoken with his Malaysian, Indonesian, Qatari, Iranian counterparts regarding the matter.

Ankara has openly criticized the treatment of Rohingya Muslims living in the Rakhine state in Myanmar and has urged the international community to take action to prevent suffering.

Last week, Çavuşoğlu called on Bangladesh to open its doors to Rohingya Muslims fleeing violence in Myanmar's western Rakhine state, saying that Turkey would be willing to cover the expenses for them.

Violence broke out in the Rakhine after security forces launched an operation against Rohingya Muslims, forcing nearly 125,000 people, including women and children to flee and seek refuge in neighboring Bangladesh since Aug. 25, when clashes began.