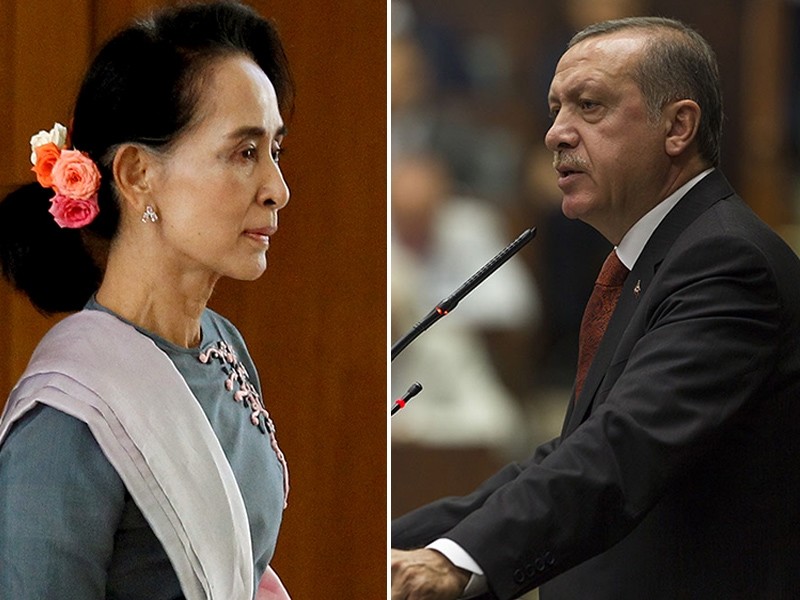 The two leaders discussed methods to solve the ongoing crisis and ways to provide humanitarian aid to the local population.

Turkey condemns both the terror and operations targeting innocent civilians, Erdoğan said, adding that incidents in Rakhine turning into a grave humanitarian crisis causes public indignation. He urged Suu Kyi to refrain from excessive use of force and show utmost sensitivity to protect civilians.

Erdoğan also informed the Myanmarese leader about his talks with world leaders over the issue, including the U.N. Secretary-General Antonio Guterres and Bangladeshi President Abdul Hamid.

Following the talks, Presidential Spokesperson Ibrahim Kalın announced that the Turkish Cooperation and Coordination Agency (TIKA) will be the first foreign body to provide aid to Rohingya Muslims in the Rakhine state.

"At the initial stage, emergency relief packages, which consist of the people's basic foodstuff – rice, dried fish and clothing, will be provided to the Rohingya who escaped from attacks in Maungtaw and Buthi Taung to the mountain regions," Kalın said.

Citing ongoing concerns about uncertainty and security in Rakhine, Kalın said that aid will be delivered via military helicopters in cooperation with Rakhine State Government, adding that Turkey will also deliver medicine and medical supplies to those in need.

On Thursday, a delegation, which will include Foreign Minister Mevlüt Çavuşoğlu and TIKA President Serdar Çam, will personally provide assistance and first aid to Rohingya Muslims in the camps near Cox's Bazaar in Bangladesh, Kalın said, adding that Turkey will deliver aid to 100,000 families.

The State Counselor of Myanmar is the de facto head of government of Myanmar, equivalent to a prime minister.